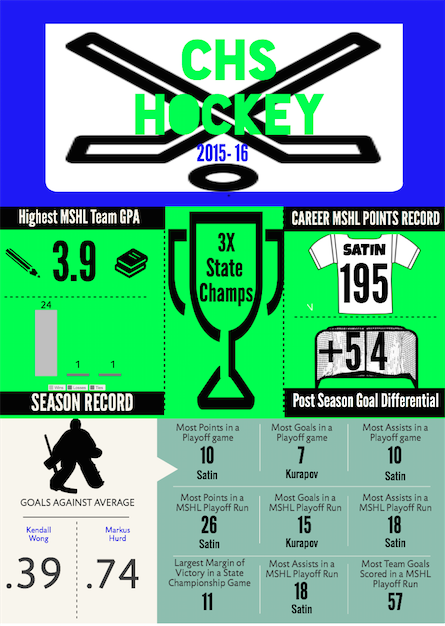 By Cristian Edwards and Jake Certner

The ‘72 Miami Dolphins, ‘85 Chicago Bears and ‘96 Chicago Bulls defined greatness. Each team is synonymous with complete dominance of the league in which they played, and the 2015-16 CHS Hockey team deserves to be on that list.
The team put together an unbelievable 20-1-1 season, capping it off with a second straight state championship–its third in four years. CHS Hockey is no stranger to exceptional seasons, but this year’s team may be the best one yet.
“From a records and stats perspective, Churchill is in the conversation as one of the best high school hockey teams in Maryland State Hockey League’s (MSHL) history,” said MSHL President Ron Mascetti.
The Bulldogs set nine MSHL records during the playoffs alone, including most playoff points by a single player, most playoff goals by a single player and the largest margin of victory in a state championship.
It is almost impossible to find any flaws in the team’s makeup. Whether it is offense, led by one of the best players in MSHL history, or defense, anchored by two of the best goalies in the state.
According to Mascetti, the team’s success came from its “excellence in all facets of the game,” with no noticeably weak aspect bringing the team down.
Leading the offensive charge this year was captain and senior forward Phil Satin. Satin not only added four postseason records to his résumé, but he also broke the record for most career points in MSHL history.
If Satin didn’t provide enough superstar talent for the team’s offense on his own, junior Andrew Kurapov was there to fill the gaps. “Kura-god” notched two of his own MSHL post-season accolades, including breaking the single-game goal record with an incredible seven-goal performance in the state championship game.
This scoring outburst broke a record that stood for decades, and is sure to stand for some time to come.
On the other side of the ice, senior goalies Kendall Wong and Markus Hurd racked up unprecedented goals-against averages of .39 and .74, which were the first and second best in the state. In fact, they were both so good that the coaches decided to interchange them each game during the playoffs.
This decision paid off for the team as Hurd posted a 13-0 shutout in the state semis against the DC Stars, and Wong an 11-0 shutout in the state championship against Annapolis-Old Mill.
According to WashingtonPost.com, the Bulldogs are the number two team in the entire public and private DMV behind Landon, whom the team did not get a chance to play this year.
In the MSHL’s 28-year history, only one other team can compete with the dominance of this year’s: the CHS Hockey team from last year. Amazingly, that team posted similar records, such as the highest margin of victory in a state championship (at the time) of 10, but this year’s team not only broke more records but dominated the league in bigger and badder ways.
With a variety of record breaking numbers, league leading players and a state championship all under their belt, the Bulldogs have built a strong case for the best MSHL team in history, and have certainly earned every accolade that has and will come their way.
“With seven seniors, two of the best forwards in the state, two of the best goalies in the state, more depth than anyone else and an amazing coaching staff, it seems unlikely that there will be another team that can put together a season like this,” Hurd said.