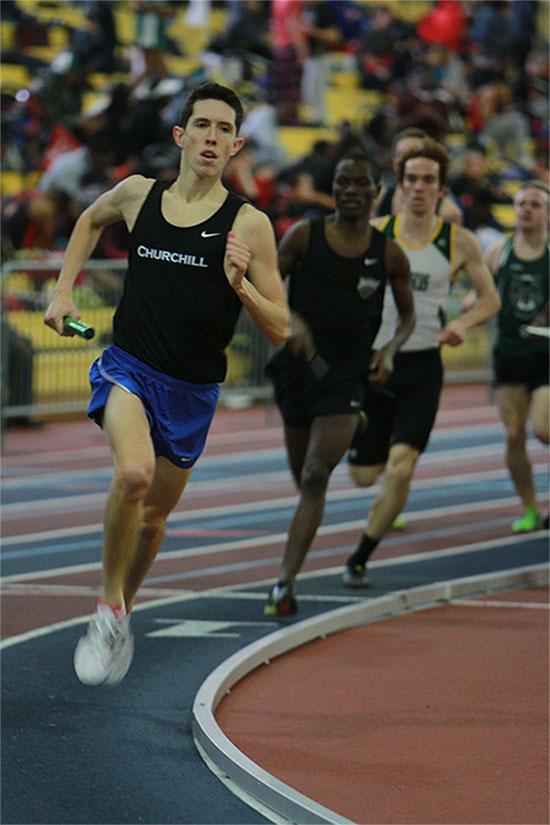 Senior Michael Hughes runs his leg of the relay.

MCPS schools may have closed for the last week of January, but that didn’t stop the relentless winter track team from shoveling almost three feet of snow to train and compete against some of the toughest teams in the state.

At the beginning of the new season, seniors Michael Hughes and Alexandra Conway incorporated dynamic stretching into the 2015 fall cross-country season into their new team workout routine.

“After we do a mile warm-up, we do dynamic stretching instead of static stretching in order to avoid stressing muscles as well as avoid the risk of any injuries,” Conway said.

The team is all too familiar with injuries as some runners, including seniors Jason Shefferman and Jacob Grant, missed the whole winter season due to preseason ailments. Despite the injuries, the team continued to overcome its challenges and battle some of the toughest teams in the county.

According to senior captain Julie Thomasian, the girls team began to adjust its training strategy from long distance to faster paced workouts at the beginning of the winter season.

Despite losing some key runners to injury, the boys team was still able to find success in the winter. For the 3200m run, Hughes had the fifth fastest time of 10:03 and senior captain Mitchell Welter had the fourth fastest time of 9:52 for the county rankings. The 4×8 runners, seniors Josh Freilich, Hughes, Welter and junior Matthew Goldsmith came in second in the county and qualified for states.

“The boys distance and jump squads have had really good seasons,” coach David Warren said. “From the beginning to the end, they have progressed nicely.”

The girls had a very respectable season as well this year as a profound number of athletes from the team made it to states. Junior Julia Reicin, who had won the open 800m at regionals and qualified for states this year, was a key component to the girls success. Other than Reicin, freshman Karis Lee, (55 meter dash), and senior captain Sydney Veator and sophomore Lucy Lee, (55m hurdles), all qualified in their respective events. On top of independent qualifications the 4×8 team, led by Reicin, had finished a tremendous season, making it as far as states.

“The girls program, as well, is incredibly deep and has progressed nicely throughout this track season,” Warren said.

According to Welter, Northwest is one of the toughest competitors the CHS track team faced because they had a talented team, which included hurdlers, sprinters and distance runners.

Although winning is suspected to each runner as the most important standard of the sport, consistent improvement can be just as valuable.

According to Warren, it doesn’t matter if the student is the best or the worst on the team, going out and trying your best at every meet is essential because not only is this a team sport but everyone should try to do their best to personally improve.

“We always have high expectations for the kids as well as the program, and as coaches, we want to do our best to help the kids place high in all meets,” Warren said.