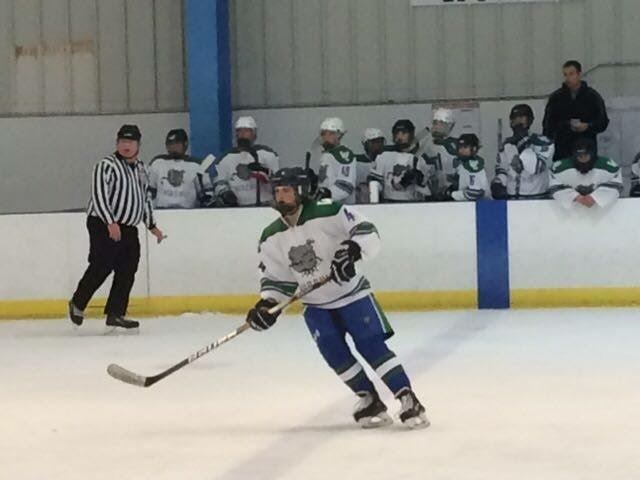 Of the three CHS hockey teams consisting of 47 total players, three of them are girls. Freshman left-wing Samantha Lai is on junior varsity, sophomore defender Kate Danziger is on varsity two, and senior center Madison Farrand is on varsity one.

CHS hockey is a club sport and is divided into three teams due to the team’s abundance of talented players. Varsity one (V1) is the top team, followed by V2 and JV.

Lai has been playing hockey for seven years and is following in the footsteps of her brother, who also played high school hockey.

Lai has experienced some opposition to her playing as a girl in a predominantly male sport. She has had people shoot pucks at her, and she has been tripped on purpose in a game. However, she chooses to use the difficulties as motivation.

“If someone thinks I’m bad, I’ll just work harder to prove that I’m not just a girl,” Lai said.

Danziger was also inspired by her brother’s playing, but unlike Lai, hockey hasn’t always been Danziger’s sport.

Danziger had been a competitive gymnast for nine years before deciding to switch to hockey, which she has now been playing for four seasons.

“When you compete in [gymnastics] meets it’s constantly about performing well as an individual, and there is so much stress,” Danziger said. “When you play hockey, you are always a team supporting each other. Whether you are on or off the ice, you are like a family. Whether you win or lose, it’s a team effort, not just an individual effort.”

At tryouts, Danziger was intimidated by the speed of play and skating drills, but once she realized she could keep up with the boys, she started to feel more comfortable.

“Although there are points where I feel judgment from some of the players, it doesn’t affect me in a negative way, it just motivates me to work even harder,” Danziger said.

Senior varsity two player Adam Kass hasn’t encountered any problems from other teams related to Danziger being the only girl on the team.

According to Kass, it’s not “as uncommon as [one] might think” to have at least one girl on a team with boys before.

“At first, it was kind of hard to fit in and I felt that [the boys] didn’t really accept me on the team,” Danziger said. “Now, I feel like I’m just like any other player on the team. I think once they saw that I am a hard worker and an aggressive skater, it made it easier to remove the idea that I am a female hockey player, and now I am just a hockey player to them.”

Girls hockey has little to no physical aspect of the game, while boys hockey deals with checking players into the boards and diving in front of pucks to block shots.

“It actually turns out very well for Kate because she’s able to do more skill-wise since she doesn’t have to worry about knocking someone off the puck,” varsity two coach Jim Vagonis said. “It makes girl hockey much more technical. It’s a good skill that she brings to the team. She can use her skill instead of physical play.”

“Her [work ethic is] incredible and her form is perfect,” Vagonis said. “After practice, she will go for a run. She’s a good listener, she works hard and she’s dedicated— what every coach likes to have. She’s a great asset to the team.”

Vagonis has not noticed sexism towards the girls who play hockey.

“The boys on the other teams might be a little bit intimidated about it, saying ‘I’m not gonna hit her’ which plays to our advantage of having her,” Vagonis said. “If it happens, it happens. She’s not afraid to get right in there and muscle it up and work to get out of there with the puck. She’s very good at doing her job and that’s how team sports work. Every player needs to do their job and she does hers just fine.”

Like the other two girls, Farrand was influenced by a family member: her dad.

When she was 3, Farrand attended a Washington Capitals game, which made her fall in love with the sport and even begin playing it.

Despite missing five months of hockey due to a concussion, Farrand scored two goals in her first career game for CHS against B-CC in a 9-1 victory.

According to sophomore varsity one player Dylan Healy, other schools have been “shocked” at Farrand’s profound skill level.

Farrand’s goal for the team is to win states for the second consecutive year.

“My favorite part is [being] able to represent the school and play with my friends, even if they’re all boys,” Farrand said. “They take care of me and that goes a long way.”