Indoor practices do not work, let the Dawgs out 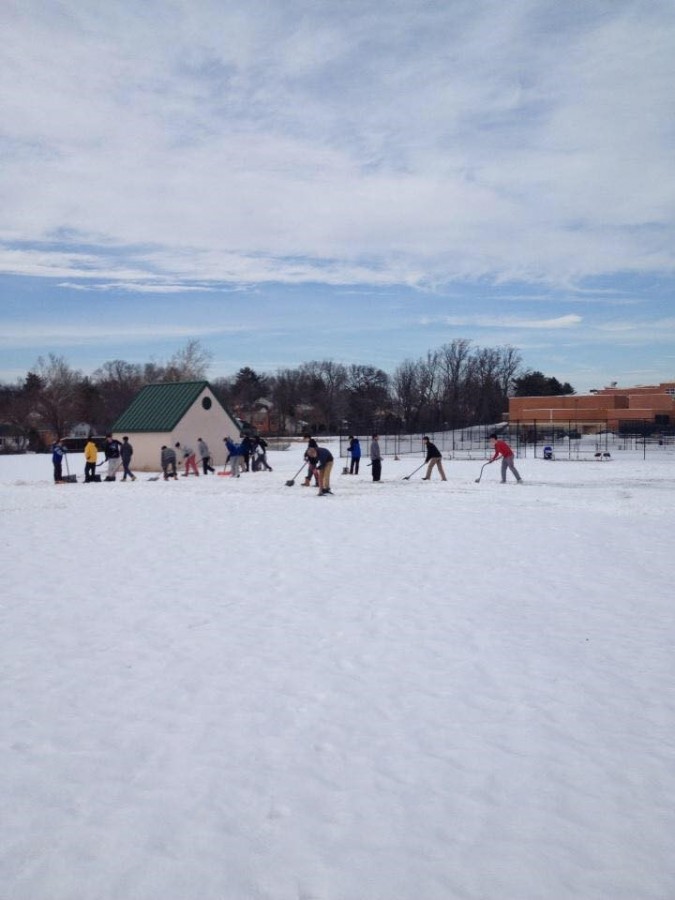 In preparation for tryouts Feb. 28, boys lacrosse players shoveled their practice field Feb. 25, only to have school closed the next day due to snow.

As someone who has participated in baseball every year at CHS, I have experienced first-hand the effects cold and snow have on tryouts and practice. Every year I have been here it has been an issue. In fact, the past two years tryouts for outdoor spring sports have been forced inside by snow. You can’t hit or throw real baseballs inside, and there is not enough room to do most fielding drills. It is incredibly difficult to truly showcase your skills for a short amount of time when you are playing a sport meant for a large field on a high school basketball court.

Spring sports are meant to be played outside in warm weather without snow on the ground. However, due to the fact that seniors leave too early for Montgomery County to push the season back, spring teams at CHS are forced to practice in the gym and halls, creating a chaotic mess of cramped space and changing practice times.

CHS has seven spring sports teams, and when there is snow on the ground—as there often is during the first few weeks of March—all seven of these teams are forced to share our two gyms for all practices.  There simply is not enough time or room for CHS teams to effectively prepare for the season, which is why the school needs to obtain a new indoor facility for practices.

According to senior lacrosse player Derek Altobello snow and cold forces JV and Varsity lacrosse “into a smaller area for a shorter amount of time,” causing them to “not be able to do the same things,” that they would with outdoor practices, thus they are less prepared for the season.

It is hard enough for CHS coaches to take new teams and get them game-ready by the time the season starts, but when they are limited for time and space it becomes a nearly impossible task. Even tryouts become difficult when outdoor warm weather sports either play inside or in the freezing cold. It is for this reason that fall sports, like football, get a full week of outdoor tryouts, yet sometimes spring sports have only one day inside to make decisions.

Outdoor sports are not meant to be played in a basketball gym. Ideally, practice could just be held on CHS’s outdoor facilities. However, when the weather interferes there are plenty of rentable facilities, like Rockville Sportsplex, fairly nearby that would serve as a much more effective solution than stuffing all our spring sports teams into the gyms.

According to CHS track’s senior captain Lucy Srour, being inside makes it hard to “get long runs in,” and the “inside surface is much harder on your body,” which can leave runners more sore and less ready for the season.

Just because our indoor facilities are a subpar alternative to being outside, doesn’t mean that there is no such thing as a good indoor facility. The advantage of somewhere like Rockville Sportsplex or Champions Fieldhouse, is that they are specifically designed to support indoor athletics. They have turf fields, plenty of room, and equipment that allows teams to play as though they were outside.

According to Mark Dager, a junior on boys tennis, separate facilities “would be really helpful,” because then we “could actually play our sport.”

Tennis had their tryouts delayed a full week because they cannot play at all inside our gyms, and had nowhere to go. This means that they lost a full week of preparation and playing together.

There is no reason that spring sports need to be put at a disadvantage due to weather. As a school and a community, it would not be that difficult to secure somewhere better for our teams to hold more effective practices and tryouts. Although our hardworking coaching staff does a great job preparing our teams even when they have to go inside, it would make the lives of everyone involved easier if the facilities at their disposal were more suited for the drills they need to run to get the teams ready.