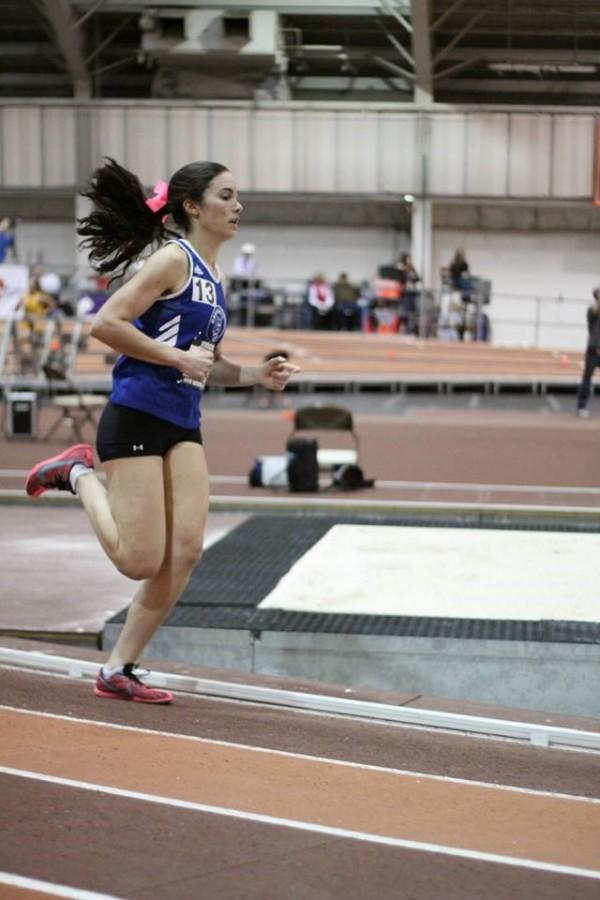 Srour competes in the mile during the Virginia Tech invitational Jan. 31.

Senior Lucy Srour finished the Virginia Tech invitational Jan. 31 with a mile time of 5:05, breaking the previous CHS record of 5:06, which Maryam Fikri set in 2008 and held for about six years.

“It was super exciting, but it was extra exciting that this happened senior year because it’s my last year running for Churchill,” Srour said.

According to head coach Scott Silverstein, the achievement is quite significant for two reasons. The first reason is that the record was originally set during the outdoor season, but Srour beat the record during the indoor season, where it is much more challenging to run.

“It was a very emotional moment,” Silverstein said. “Breaking the record is a way for her to leave her mark.”

The second is that Srour has also had to overcome serious injuries and the obstacles that came along with them.

“Last year specifically, I got a stress fracture in my foot and it ended my outdoor track season, which was upsetting because I was just starting to run my fastest times,” Srour said. “It’s always hard to stay positive about running in times like that.”

According to Silverstein, although Srour had doubts and struggled through these injuries, she is now better than ever.

“The injuries held her back,” Silverstein said. “Now that she’s no longer injured, she’s hitting that potential we all expect.”

Srour plans to continue track and cross country, no matter where she goes to college.

“I plan on running in college and will most likely be committing somewhere but I am not completely sure where yet,” Srour said.