Winter’s top five hardest things to do in sports 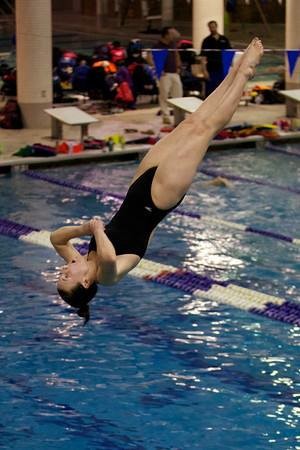 In the world of sports, many debates focus on how difficult a sport is to play compared to other sports. The debates have continued on and on, so the Observer weighs to share its opinion on the top five hardest things to do in winter high school sports.

Landing a Successful Dive: Although many see it as just jumping into a pool, it is actually more complicated than it seems. Divers need to time their routine, make sure they don’t mistime the jump and finally have the courage to go head first into the water from heights as tall as one meter high. An extremely difficult task, divers make it look easy with preparation and tons of experience in the water.

Controlling and Shooting the Puck on the Ice: Gliding across the ice so graciously is what highly trained hockey players are famous for. Most people have learned to ice skate, but only hockey players can shoot the puck across mid-ice to a teammate who can place the puck in the back of the net. These athletes manage to make it look like they learned how to skate before they learned to walk. Having this kind of coordination and mobility on such a slippery surface makes the sport exclusive to the stick-wielding athletes who play it.

Basketball Players Sinking a Contested Three-Pointer: Having only one defender to beat for a basketball player isn’t that hard of a task to accomplish for a 6’3” talented jock. However, with only three seconds left on the shot clock, and the threat of a turnover looming, the play becomes much more difficult. No high school athlete can make a long-range three pointer every time, especially with a giant defender ready to block his shot.

Getting the Ace: During a volleyball match, the teams rally back and forth to win the point, but it all begins at the same place: the serve. Serving the ball initiates the rally and begins the point. If the server can ace the other team on the serve, it’s an incredible accomplishment because they don’t need to battle it out for a gruesome point with spikes and sets. Acing someone may seem easy, but it truly is a challenging feat.

Taking Down your Opponent: Wrestling takes power, strength and endurance, all of which are aimed toward the goal of bringing an opponent to the ground. Wrestling also requires technique, which is learned with practice. A wrestler must try to take down his opponent in a way to conquer his opponent. Taking down an opponent requires strategy, execution and finally, quick thinking, which are all hard essentials to combine.