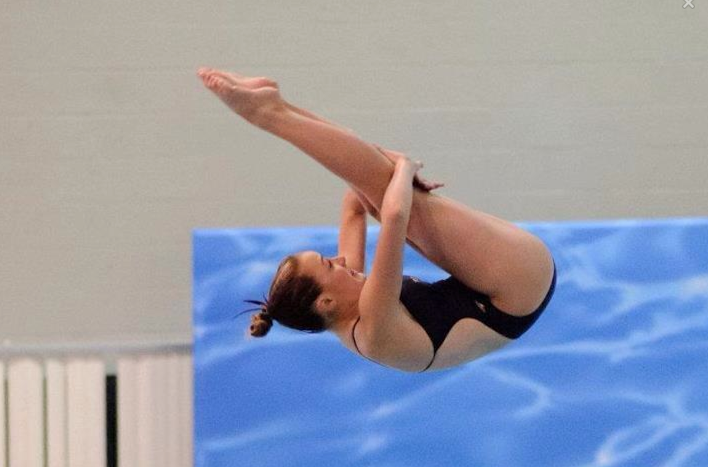 Senior Kali Becker is one of the many CHS athletes to commit this fall.

Senior Louis Dubick verbally committed to the University of Maryland at College Park as a sophomore after the 2011-2012 spring season, but Dubick officially signed as a Terrapin for the 2016 season Nov. 12.

Dubick shined in his four years as a Bulldog, scoring 189 goals and having 175 assists in his first three lacrosse seasons. Dubick was named an All-American lacrosse player for each of his three years at CHS, and he plans to continue his extraordinary performance at the college level.

“I am just looking forward to getting on campus and putting in the work with a national championship team,” Dubick said.

Though Dubick has an incredible opportunity ahead of him, he will continue to work hard with the Bulldogs to cap off his final season on a high note.

According to Dubick, he hopes that a state championship comes out of this upcoming lacrosse season.

Senior track and field runner Julia McDermott, who has also played varsity soccer for three years, recently committed to the College of William and Mary.

McDermott has been on the varsity track and field team since her freshman year, competing in the long and triple jump, which she will continue in college. McDermott qualified for states in all three of her years at CHS, and this past June she competed at the New Balance Nationals.

“I am so excited to be spending my next four years at William and Mary,” McDermott said. “I know that college level athletics will be a step up, but I feel like the environment of the school as well as of the team will create an atmosphere where I can thrive.”

McDermott’s parents are extremely proud of Julia’s accomplishments and they look to further support their daughter throughout her college track career.

“She has worked so hard for this,” Julia’s mother Margaret McDermott said. “We really could not be prouder or happier.”

Congratulations to senior Elaina Gu for recently committing to swim for Princeton University.

Gu has been on the CHS varsity swim and dive team since her freshman year, scoring points for the Bulldogs in the Washington Metropolitan Interscholastic Championships as well as the Maryland 3A 4A state championships. For her club team, Gu qualified for and swam in the 2014 NCSA Junior Nationals Championships in June.

“I’m really excited to be joining such a great school and swim team,” Gu said. “The first time I visited the campus I knew I wanted to be there for the next four years of my life. Not only does Princeton offer good academics, but the girls on the team are also very inspirational and the environment is amazing.”

Chang has been on the varsity volleyball team since her freshman year, playing over 118 sets for the Bulldogs. As a captain of the season, helped the team to a 15-1 record and a division title.

“I chose Oberlin because of all the opportunities it presents,” Chang said. “The people there are from all over the country and really believe that they can change the world and aren’t afraid to be themselves. It’s a very community oriented school and the girls are amazing and the coach is adorable. I’m really excited.”

Congratulations to senior David Fitzgerald who recently committed to run both Cross Country and Track and Field for Temple University.

“So many things made me choose Temple,” Fitzgerald said. “The guys on the team are the best guys I’ve met. They also have the perfect balance of college life and running. The perks are endless, and I get enough free gear to wear for life.”

“Despite having his college plans all set, Fitzgerald will still focus on making his last seasons of indoor and outdoor track count.

“I have to prove to the coach that he made the right call,” Fitzgerald said.

Congratulations to senior Kali Becker who recently committed to dive for The University of North Carolina at Chapel Hill.

“I’m so excited,” Becker said. “The team is awesome, the coach is awesome, and they have a beautiful campus. It’s a really great school.”

Becker has had her heart set on becoming a Tar Heel since she was 10, when she competed there for a regional dive meet.

“I’ve been in love with UNC ever since I dove there,” Becker said. “I have so many friends on the team it feels like a family.”