Senior and her horse succeed by leaps and bounds 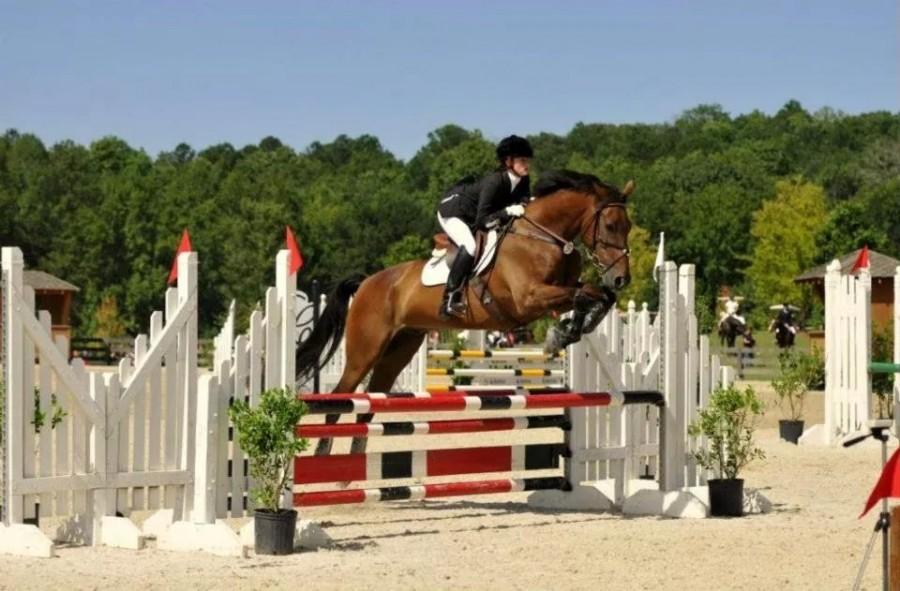 As the competition progresses, senior Shannon Case passes through the three phases of eventing, a discipline of horseback riding, just as she has been doing since the age of 5.

The three phases of horseback riding are Dressage, Cross Country jumping and Stadium jumping. In dressage, the rider and horse work together to perform a predetermined pattern. Cross country jumping is a course of 18-25 jumps in the open which includes solid obstacles. In stadium jumping, athletes jump over wooden rails, in an enclosed arena, that fall when they are hit.

“Cross Country is my favorite phase,” Case said. “It’s really thrilling, and every cross country course is very different with new obstacles and questions for the horse and rider.”

In each phase, a rider is given penalty points for things that are done incorrectly. These penalties vary with each phase. In dressage, riders are judged on their position, connection with the horse, accuracy of movements and overall flow. In cross country jumping, riders receive penalty points for stopping at fences or missing the optimum time, which is usually between 30 seconds to one minute. Stadium jumping also has an optimum time which riders are penalized for missing. Riders are also penalized for every wooden rail that falls. At the end, the points from the three stages are combined.

“The horse and rider with the lowest score win,” Case said.

During Case’s sophomore year, she qualified for the American Eventing Championships, a four-day event that is held every three years, where the top horse and rider pair in the country at each level are invited to compete. Though a small stop in the second stage of the competition cost her the competition, it was still one of her most memorable experiences.

“Even though I ended up as one of the last place finishers, it was definitely an amazing experience,” Case said. “It had the biggest and most challenging courses I’ve ever ridden on, and my division had nearly 80 of the top competitors from the country.”

During the spring and fall, Case competes almost every weekend. She has earned many awards including the Seneca Valley Pony Club Combined Training award in 2013 with her horse Simon, the Royal Courier Horse of the Year award in 2012 with Simon, the Waredaca Horse Trails with her sister’s horse Kobe in 2013 and the Maryland Horse trail, twice, with Simon in 2012 and in 2013.

Case’s dedication has helped her develop a passion for horseback riding, and one of the most important aspects for her is working with the horses themselves.

“It’s awesome to build a working partnership with a horse and to be able to communicate with him or her,” Case said. “They are amazing animals, and I love to compete with them.”

Despite her success and passion for the sport, Case’s future in riding is still undetermined.

“I may not end up as a full time professional rider, but horses and competitions are going to be my passion the rest of my life,” Case said.