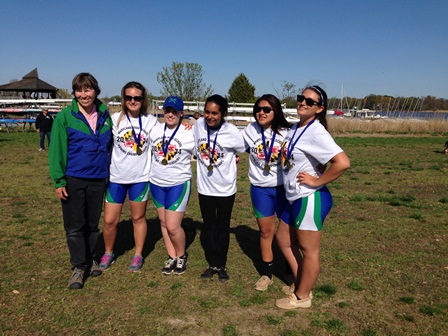 The women’s four boat won its qualifying heat by a staggering margin of 10 boat lengths, which is equivalent to 420 feet. Among the cheering crowd, the president of the team, Bill Snider, expressed a concern that the rowers should have saved some energy for the final race. But these young women, in their very first year in the sport, dominated again in the finals, taking first place by 15 seconds.

“People thinks crew is easy, but it’s not,” freshman Dominique Simpson said. “There are so many challenges like any other sport.”

Head coach Cindy Cole waited at the finish with a big smile and praised the hard work the girls have put in during the season.

“We were really together,” freshman Lindsey Levy said. “It was like we were just floating on the water.”