Boys will be boys, girls will be girls, despite proximity 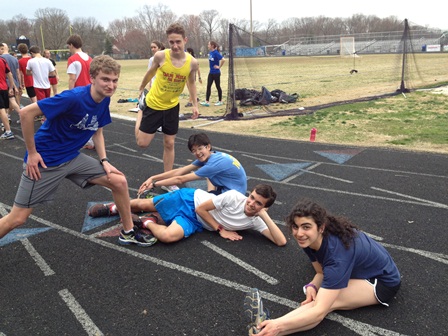 My experience on the girls tennis team has been crazy, just like any other girl on an all-girl team. We gossip, we tee-pee houses, we even sing badly when no one is around. Yet as soon as boys enter the picture, we girls on all-girl teams will close off and be much tamer than we were before.

This formal attitude we take on will last only until the boys pass by. Once they leave, we return to our normal behavior.

This rapid change in behavior will only happen about once or twice a practice for most girl/boy teams. However, for a coed team, where boys and girls are constantly aware of each other’s presence, this type of erratic behavior can happen more often.

“I would say girls play worse around boys because they try to show off and therefore worsen their performance,” junior runner and basketball player Isabella Wu said.

It’s a natural response to show off when the opposite gender is around. In elementary school it was the boys pulling pigtails and girls poking. In middle school, it was ignoring the other. Now on high school coed teams, boys and girls still try to show off to teammates to get their attention.

“For some people it doesn’t make a difference, but I’ve noticed that guys tend to show off more with girls watching,” junior swimmer Kyle Parisi said. “Not just in swimming, but in other sports too and in general.”

Some people believe that these seemingly natural responses to the opposite sex’s presence have negatively affected a player’s ability and performance. However, this presence can also positively affect an athlete’s performance.

“I find that the really serious girls are a little more lighthearted in coed and they laugh a little more, but they are still really serious about their volleyball,” said Cindy Hillard, head volleyball coach for girls, boys, and coed volleyball. “What I do see on coed is a little more ‘razzing’ between the players.  It is a wonderful thing as it lifts spirits and raises adrenaline so that spirits stay high.”

This “razzing” seems to be both a healthy outpost for a coed team’s competitive drive between genders and a good way to show off without jeopardizing one’s playing ability. However, a grey area within a coed team may exist.

“If anyone is dating within the team, it is often a tricky situation,” Hillard said. “Everything can be okay, and then with a split second change of something going wrong or a ball going to a different person, moods can change. I highly recommend not dating within a team.”

Some teams, like track and field, view dating among Bulldogs positively, awarding paper plates to the cutest couple.

“Coed teams are a great idea that could bring CHS closer together,” Parisi said. “It’s an opportunity for people to make new friends they wouldn’t have before.”