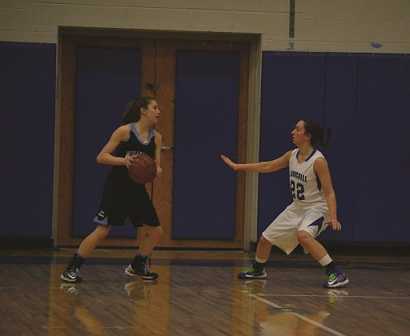 When senior Shira Racoosin was in the first grade, her parents signed her up for recreational basketball and soccer teams. When she began dribbling the soccer ball with her hands, it became adamantly clear that basketball was her calling.

From that point on, Shira dedicated herself to only basketball. She played on an Amateur Athlete Union (AAU) team from third to 11th grade and made the varsity girls basketball team as a freshman. She also played on the JCC Girls Maccabi Basketball Team for four years.

I would say that I have definitely matured as a player,” Shira said. “As a freshman playing on varsity, I had very low self-confidence and was honestly really scared to be on the floor. I think as I got older and earned more time on the court, I gained a lot of confidence and drive to play not only for my team but also for myself.”

Shira has been recognized for her talents on each team. She is a captain on the varsity girls basketball team. She was named “Athlete of the Year” by the JCC in 2011 and “Most Dedicated Player” by her JCC coaches in 2013. Additionally, she was one of the 12 women selected to play on the U.S. Junior Women’s Maccabi Team, representing the USA in the Israel games.

Shira has been dubbed a stand-out player for several reasons. The first is her selflessness, both on and off the court.

When the team needs support, she is always there to provide it, according to freshman Nicole Brodkowitz.

“She puts the interest of the team before herself, and she always supports her teammates,” Brodkowitz said. “She knows how to pick the team up and get them going.”

Besides this impressive sportsmanship, Shira is also sound due to her years of dedication and focus.

“When Shira is playing, she sees the floor,” her mother said. “It’s a hard skill to master. Because of this, she’s able to pass the ball well and lend many assists.”

She has also been noted for her impressive aptitude for jumping.

“Shira has an amazing natural athletic ability, especially when it comes to the ability to jump – both for her jump shot and to make defensive plays,” girls basketball coach Katelyn McMahon said. “She has had some truly amazing clutch shots throughout the past four years, and each one still stands out in my mind.”

According to senior Katie Jenkins, the combination of her positive attitude and impressive athleticism is what makes her a truly strong player.

Along the way, she has met several people who have inspired her to continue pursuing her talents.

“One of the most important people in her growth as a player was her first coach, Wayne Olan,” Lauren said. “He truly believed in her and always had encouraging words for her. I know that inspired her to keep playing. He also played a key role in bringing Shira to Churchill from private school.”

Although Shira plans to keep playing basketball, she has decided to focus her sights elsewhere in college.

Although basketball is something I love to do, I see it more as a hobby rather than a career choice,” Shira said. “I have definitely considered playing in college but have chosen not to in order to pursue a focused, well-rounded college education.”

For now, Shira plans to finish off her last season at CHS with power and pride. She has come a long way since picking up those soccer balls in the first grade.

“Shira represents Churchill extremely well as a student-athlete,” McMahon said. “It is rare to encounter a student-athlete who pushes herself to do better in the classroom and on the court at all times. It is a very admirable quality, and one that I know will lead her to a very successful future after Churchill.”