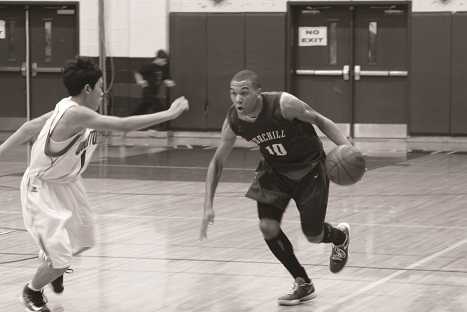 The boys basketball team is pushing towards the playoffs with only two losses in the last 13 games.

The team has been playing hard so far this season, earning its 17-5 record.

“We have clinched our division, so we’ve already reached one of our goals,” senior Bryant Wheatley said.

The Bulldogs have made some changes to the team’s lineup to help them win games.

“We lost our point guard junior Matt Moshedi early in the season, so we had to put players in different positions and fix the offense around the loss,” Wheatley said. “The sophomores are stepping it up and playing like juniors, and our juniors are playing like seniors.”

The boys had a hard 67-42 loss during their senior night against Magruder Feb. 19.

Senior captain Dominique Williams was the leading scorer with 10 points.

Magruder is the number one team in the state and has only lost two games this season.

“Allen Njumbe had 34 points against Watkins Mill,” Arthur-Williams said. “We had more players who could get to the line while they had more three-point shooters.”

The Bulldogs beat Wootton 61-42 Feb. 6. In the second quarter, a six-point run gave them an eight-point lead at halftime. Following halftime, the team went on a 10-point run to put them up by 15 and secure the win.

“The top players of the game were Allen Njumbe with 18 points and Bobby Arthur-Williams with a double-double,” head coach Matthew Miller said.

The team’s eight-game winning streak came to an end with a 64-46 loss to Quince Orchard Feb. 5.

“I think we lost because we did not come ready to play,” Williams said. “We were very lazy and not into the game.”

“Junior Malik Harris went off in the Clarksburg game, finishing with 24 points,” Wheatley said. “Senior Dominique Williams, consistent as always, had 13 points and 9 steals to help us overcome Clarksburg.”

The team scraped by with a 69-64 win in overtime against rival Walter Johnson Jan. 30.

“Our program’s culture and toughness pushed the win in overtime,” Miller said. “Our guys manned up and found a way to win.”

According to Wheatley, Harris had his highest point scoring game against RM, finishing with 29 points with Williams adding 22 points as well.

Harris, the new point guard, was able to put up points, break the defense down, and find his teammates.

Williams broke the CHS record for steals in a high school career against RM, reaching 127 steals.

“I expect us to get to the regional finals,” Arthur-Williams said. “I think Magruder will be tough, but I think we can beat them and have a good shot at states.”