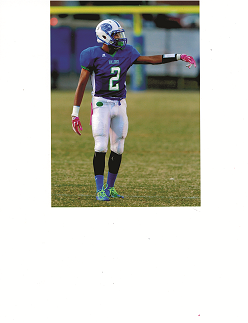 By Matt Raab and Zoe Forster

Most talk of athletes generally begins with discussion of statistics. But for senior football captain Dominique Williams, the problem is where to start. Williams is a star on both the football and basketball teams, and his contributions to each of these sports is difficult to measure.

Dominique was inspired to play football by his father, Willie Williams, who played professional football for the Pittsburgh Steelers and the Seattle Seahawks.

“I started playing in the fourth grade because I saw my dad play and he influenced me,” Dominique said.

Three years ago, Dominique was selected to both the varsity football and varsity basketball teams, a rare feat for a sophomore. His dedication to two different time-consuming sports is noticed by athletes on any team he plays on.

“He’s really hard working and has a ‘never give up’ attitude,” senior linebacker Jake Cantor said. “Players look up to him as a role model for how to conduct themselves in the proper manner.”

Dominique has been faced with a particularly difficult schedule as a result of his roles on the football and basketball teams, whose seasons often overlap.

“I go to practice, and when I get home I start my homework right away, because I know I don’t have a lot of time,” Dominique said.

According to Willie, who is also an assistant coach on the CHS football team, Dominique understands that education comes before football.

“Being Dominique’s father and coach, I can teach him everything about the game of football, but it’s up to him to take it all in and apply it to his game,” Willie said. “As far as off the field, I become that father to keep him grounded and not to let him get too high on himself.”

The presence of a coach on and off the field helps provide a strong structure, and according to Dominique, this setup has helped him throughout high school.

“My dad coaches me like one of the other players,” Dominique said. “He doesn’t put too much pressure on me, and he helps train me before tryouts.”

Since his sophomore year on the team, Dominique has become a leader through personality and example. He led the team in receiving yards, with 392, and touchdowns, with 4, this year.

According to Willie, Dominique’s love and dedication for his sports can be seen both at games and every day at practice.

“His work ethic and dedication is outstanding,” Willie said. “He is committed to doing whatever it takes to help his team win. He understands what it takes to compete every Friday night.”