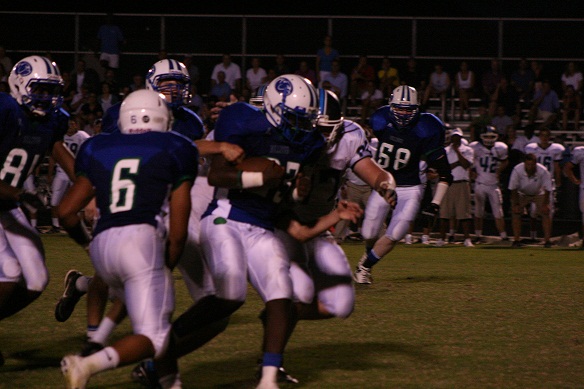 By Ben Schick and Matt Raab

A student body decked in white. An opponent in slick black. And a scoreboard dressed in a lopsided score. Week two of CHS football ended strikingly similar to the first, as the Bulldogs dominated Whitman 33-9 in their home opener.

Senior Jonathan Lee went 7 for 10 with one interception and one touchdown, senior Dominique Williams led the receiving corps with 3 receptions for 55 yards, and senior Malik Harris led rushing with 93 yards on 10 attempts. Senior Joe Nolan led on defense, putting the first points on the board with a 65-yard interception return for a touchdown.

“We can perform and get things done,” said head coach Joe Allen. “Our strength is our athleticism and speed.”

The Bulldogs followed this win with a 23-0 win over B-CC Sept. 14. The defense continued to show promise, with its second shutout in three games, and on the offensive side of the ball CHS was able to come away with enough points for a solid win.

“We did great, but we could have done better,” senior running back and defensive back Vincent Montgillian said. “We had a good defensive game, but the number of points we scored should have been much higher.”

The loss of several starting seniors after an extremely successful regular season last year led to some doubt in the offseason about the team’s ability to perform at a similar level this year on offense. New additions to the starting lineup include the quarterback Lee and four offensive linemen, although the line is still anchored by senior center Darrion Locke.

The team’s performance in the first two weeks of the season seems to be a statement against those doubts.

“This team is a little more versatile,” Allen said. “We’ve got some more weapons on offense, we’ve lost some talent, but we’ve added a lot of talent.”

Allen added that he is not concerned about lack of experience on the offensive line.

“I’m expecting them to gel into a cohesive unit and be successful,” he said.

In the season opener at Kennedy, the Bulldogs won 35-0, led by Lee’s two rushing touchdowns in a game where he rushed for more yards than he passed.

Dominance on the offensive and defensive side of the ball were demonstrated, with the defense showing promise in holding Kennedy to zero points.

“It was a good win, we played pretty well as a team,” Lee said.

Although the team has had to adjust to a different style of play, both games have demonstrated early competence on the offensive line and at quarterback.

According to senior captain and middle linebacker Will Sickels, the team lost “a lot of bigger athletes” this season, so the Bulldogs will have to rely on their speed and athleticism to make up for their lack of strength and size.

“At this point in the season, each week we want to get better,” Allen said.  “Last year we won a lot of close games.  This season we feel we can be as successful.”

The Bulldogs have high hopes for the season, and although the season just started, the goal is to reach and surpass last year’s marks.