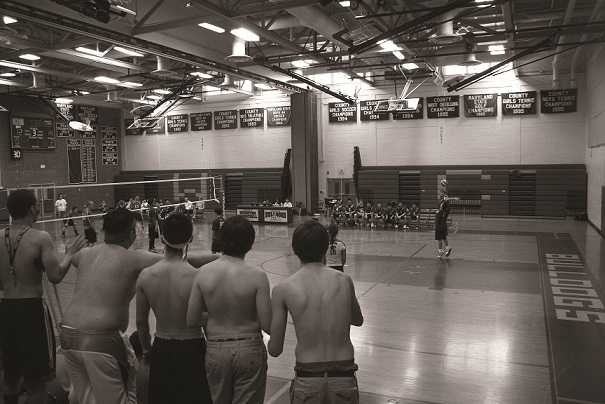 By Matt Raab and Elizabeth Campbell

The boys volleyball team has little in common with the average varsity team at CHS. There are two seniors on the team. One has never played a season with the team before. The team has two high kill outside hitters. Both are freshman. But the team has managed to overcome shortages in experience to produce a 4-4 record with three games left in the regular season, and there is potential for a playoff run.

“I have a young team,” said first year CHS coach Cathy Hillard. “But they’re excited and extremely energized to play.”
The team suffered a 3-0 loss to Wootton April 19 that brought the team’s record to .500.

“We got swept, but we didn’t lose by a lot,” said senior Phillip Ahn, who just began playing volleyball this season. “They’re a very experienced team, with players who’ve played all four years.”

Previous to that loss, however, the Bulldogs were on a three-game win streak, with wins over Walter Johnson April 16, Paint Branch April 13 and Rockville April 11.

“We played well, everyone was focused,” said Ahn. “We played to the best of our ability, and we brought it to the court.”

All three victories were solid wins for Churchill. WJ, Paint Branch and Rockville were all held to one set or less, and the Bulldogs were never in danger of dropping any of the matches. This success has given the team raised hopes headed into the final stretch of the regular season, which is three games from completion and the playoffs.

“I think we’ve done really well because we have such a young team,” Hillard said. “We have a senior who has never played before and is a starter, a freshman who is a great outside hitter. We have a very diverse group.”

Charles Yang, one of the freshmen outside hitters Hillard mentioned, is optimistic about his team’s future after its performance so far in the regular season.

“Some of the games we played before we should have won,” Yang said. “We should be 6-2. I just want to keep going, we’re getting better and I want do even better next season.”

The team would need to place in the top 16 out of 25 schools to earn a spot in the playoffs.

According to Hillard, the Bulldogs are in the running for one of the low seeds if they do well in their next three games.

“I’d like to get past the first round of the playoffs,” Hillard said. “We will probably get seeded pretty low, but I hope we get 13 so we don’t have to play seeds one through four.

Ahn has similar playoff aspirations for his team.

“I want to play our best in playoffs,” Ahn said. “Clearly there are some big name schools out there, but you never know what will happen.”