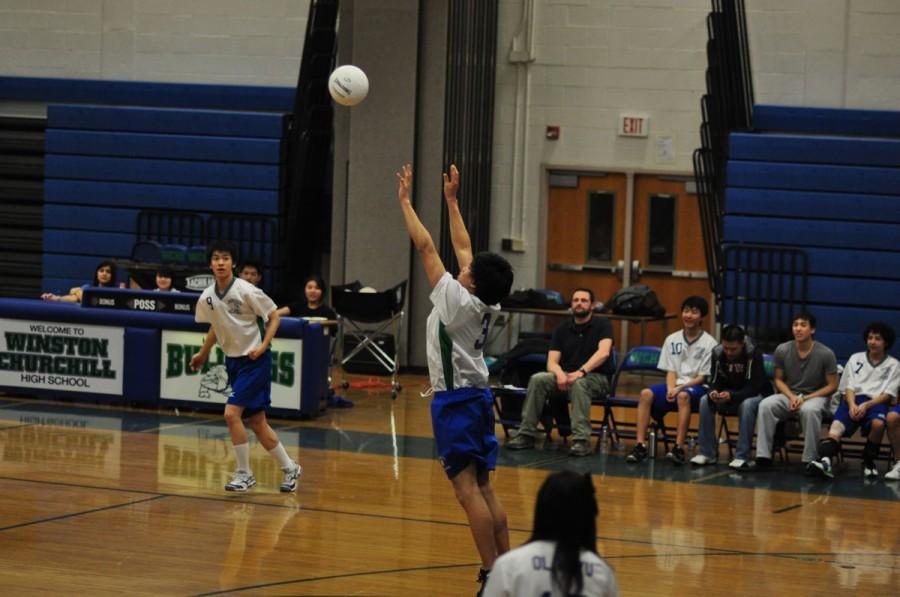 Junior Chris Woo sets the ball in a scrimmage. The boys team has found itself with a considerably younger roster than last season.

By By Yasmin Akbari and Matt Raab

After a lukewarm 5-7 finish to the 2010-2011 season, the boys volleyball team is looking to rebuild this year with a young roster and a new coach.

With only five players returning to the team from the previous season, the lineup will be full of new and younger faces. Varsity girls volleyball coach Cindy Hillard will be coaching the boys team while last year’s coach, Timothy Anderson, recovers from surgery.

“We only have one returning senior and five returning total,” sophomore Alex Fang said. “But from what I’ve heard, Coach Hillard is a good coach, so hopefully she’ll be able to train the new people.”

Fang is one of the five returning members of the team, having played during his freshman year. The 2011 roster held four members of the Class of 2012, however, only one senior, Eugene Lin, is returning, along with two returning juniors and two returning sophomores. Many seniors and juniors have opted to play coed instead of boys this year.

“With boys, it’s much more competitive and you’re always trying to get better and beat everyone else,” said junior Roy Zhou, who will play coed instead of boys this year. “There’s less pressure on coed because there are only five other guys on the team and not many of them play the same position.”

The transition of upperclassmen to the coed team has left the boys team with a lack of experience that could hurt the team as it tries to function without a veteran base.

“We’re going to have a lot of new players this year, and we’re going to lose a lot of experienced players,” junior Alex Chiang said. “It’s a fresh start I guess.”

Fang is optimistic, however, about future possibilities that this team is creating. He sees the lack of experienced players as giving more experience to younger players.

“Because we don’t have many upperclassmen, they’ll have more playing time,” Fang said. “I have the chance to start.”

Both Shiang and Fang agree that the youth of their team eventually can put them in an advantageous position.

“It’s going to be a lot of training,” Fang said. “But the lowerclassmen have potential.”

CHS will play its first match against Clarksburg March 21.