Swim and dive girls have strong showing at Metros 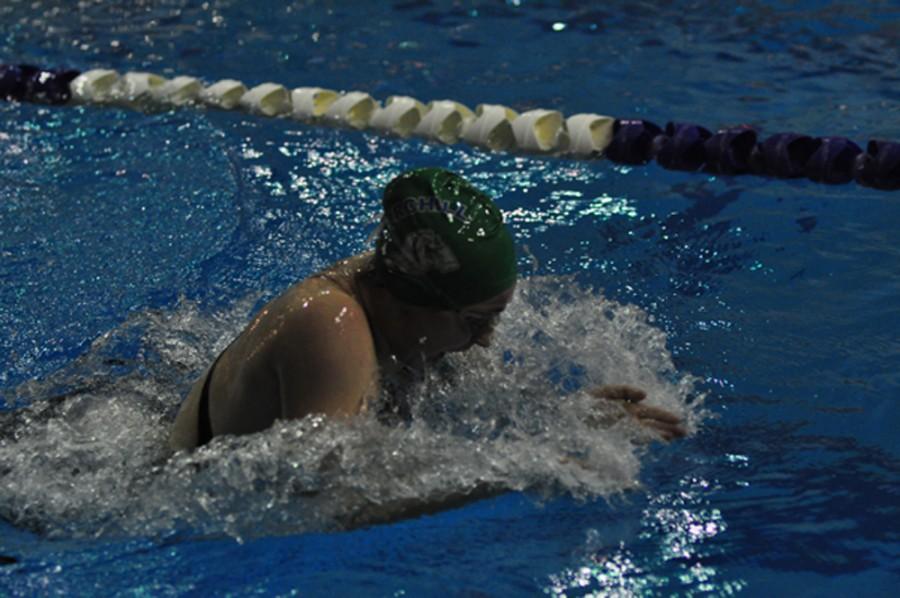 By By Zoe Forster, Business Manager

Freshman Kali Becker was key to the Bulldog’s success, winning the diving competition earlier in the week. The Vikings finished the meet off strong, dominating the 400-yard freestyle relay, yet they were unable to clinch the title.

“I was in shock on Saturday,” coach Brendan Roddy said. “I knew the teams were doing well, but I didn’t know how close it was going to be. I was so proud of the way the team swam that in all honesty I was going to be happy no matter what the result was.”

Senior Natalya Ares, the only Bulldog to win an individual event, won the 100 Butterfly. She and her classmates ended their high school careers with the Metros title.

Prior to Metros, the Lady Bulldogs defeated Whitman and Walter Johnson for the Division One Championship title Feb. 5 while the boys placed second, scoring a total of 861 combined points.

Becker won the diving while junior Jackie Stanton and sophomore Mashal Hashmen finished third and fourth respectively, putting the Bulldogs off to a great start. The swimmers helped maintain the lead by improving their seeds and best times with the help of both senior Shannon Ridge and sophomore Emily Andrews in the 200 yard Individual Medley (IM).

The boys also got off to a great start with senior Tim Faerber placing in the diving. Junior Austin Cole won the 50 freestyle and also finished second in the 100 freestyle while sophomore Harrison Gu won both the 200 IM and 100 breaststroke.

The Bulldogs also defeated the Wootton Patriots in the final dual meet of its season Jan. 28 at the Germantown Aquatic Center. The girls team clinched the win 87-84 while the boys team dominated 97-72.

The Wootton girls team won the first two individual events, putting themselves ahead of the Lady Bulldogs. Ares won the 50 free at the end of the first half while junior Michelle Illig finished third.

In the first event of the second half, Ares won her second event of the meet, putting the Bulldogs up by five points. The ladies finished strong by winning the Final Free relay with the help of sophomore Bridget Dromerick, sophomore Emily Andrews, freshman Elaina Gu and Illig.

Much like the girls team, the boys team won only one event but used its depth to keep close behind the Patriots. The Patriots won both opening relays, and by the end of the first half the Bulldogs were down 30-34.

Faerber and sophomore Ryan Coran went 1-3 in the diving, putting the Bulldogs in the lead. Senior Eric Eig, sophomore Kevin Gu, and senior Andy Rosenthal went 1,3,4 in the fly, which helped the Bulldogs stay strong. Despite not earning a significant amount of first place victories, the seconds, thirds, fourths and fifths made all the difference between a win and a loss.

The team’s graduating Class of 2012 is extremely gifted in that it has helped the team become one of the best in the county and D.C. area by using its depth and speed.

“I’m going to miss the senior class tremendously,” Roddy said. As a rookie coach, they accepted the way I coached and they made it worth every bit. I could not have done it without those seniors.”