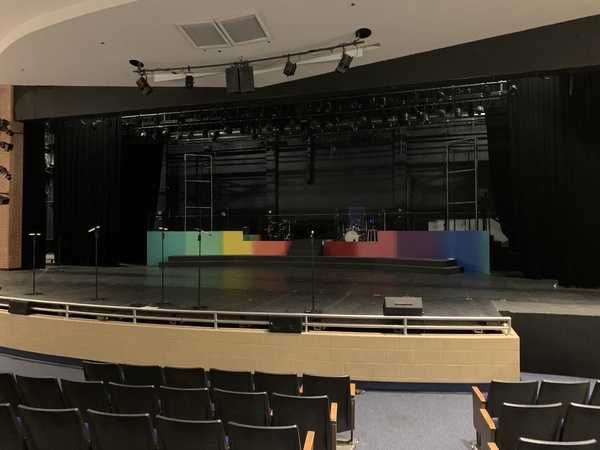 The Blast 31 set was never finished. The production is suspended.

Somewhere within the darkened halls of an empty WCHS, a colorful stage sits, ready to receive performers that, in all likelihood, won’t set foot on it again. It was the culmination of weeks of spirit-consuming work; staying at school well past sunset, struggling to keep up with homework and preparing without end. Cast members memorized complex dance routines and hit impossible notes, and the stage crew made it look as good as possible with nothing but bent lumber, screws and elbow grease. It was to be the biggest theatre presentation of the year, as it always is. Now, tickets are being refunded over the internet.

I don’t want to be too cliché writing about the situation we find ourselves in, but seeing all that work go to waste is a bit of a bummer. But, this isn’t the time for negativity. The WCHS class of 2020 had a good three and a half years of memories made, and the theatre department is such a big part of who I am today because of those memories.

I first joined the stage crew at the beginning of sophomore year at the request of my friend Brandon Schoenfeld, who basically strong-armed me into signing up. We were running “Joseph and the Amazing Technicolor Dreamcoat,” and before this point I had zero experience with any form of power tool use. It was hard at first. I’ll admit that I was treated like utter garbage for my first show. The leadership liked to have fun at the underclassmen’s expense rather than with them. I thought about quitting on numerous occasions, but I began to learn. I became adept with a drill, I learned how to accurately cut plywood and I began to help the Student Tech Director (the only senior on tech at the time) with special projects. By the time the show rolled around, I still wasn’t respected as an equal, but I was known to be a competent worker and to have some hilarious jokes. All I can say is that from that moment on, it only got better.

Every show was a different set, but the tech crew got it done. The memories from each show season are some of the best from my entire high school career. From doing line dances on stage at midnight, to having fun backstage while the show was running, to our ceremonial pilgrimage to IHOP after the first run. The gap between me and the upperclassmen closed rapidly in my junior year, and to this day I consider a large portion of the class of 2019 techies as my best friends, hands down. My social life would be so different without the stage crew that I wouldn’t recognize it.

Come senior year, we were suddenly at the top of the food chain. I was overjoyed to receive the position of Master Carpenter and act as the head of construction crew. My friends and I made an honest effort to treat newcomers with much more respect than we were ever given, and I consider many of them friends as well. Of all the shows, Blast was the best of all, but it wasn’t  different in any way. It just took all the energy of tech and amped it up by tenfold. I was really looking forward to my last one. We all were.

I walked out of school on Friday, March 13, naively confident that I’d see everyone again before the end of the month. Now, I’m doubtful if I’ll see them before the end of the year. But that’s alright. I don’t want to give out hokey advice about the journey being more important than the destination, but at least for us techies that applies all too well. That empty stage may signify the loss of a unique experience, but just building it with my friends was rewarding enough. In one form or another, the show must go on.