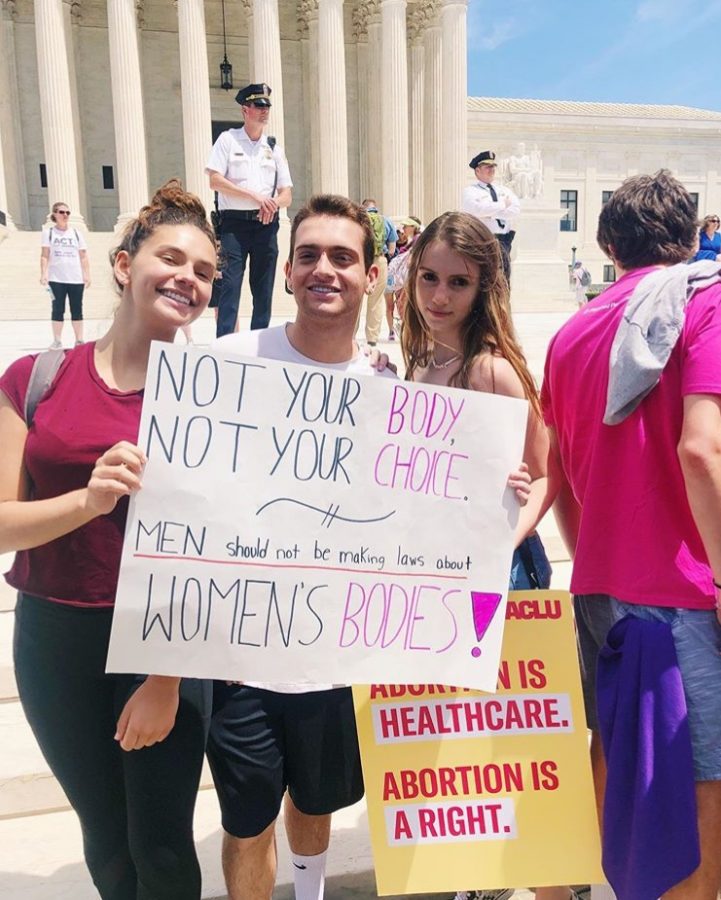 Many WCHS students have heard about the new Alabama anti-abortion law that was signed this Wednesday, May 15th, by Governor Kay Ivey. It has sparked a worldwide conversation, causing many to speak up on social media about their opinions as well as starting conversations between friends, families, and classmates.

The law was written by a woman: State Representative Terri Collins. 25 white male senators voted to outlaw abortion in Alabama unless the woman’s life would be endangered by pregnancy, excluding cases of rape and incest. This was then signed by the Governor of Alabama. Though the law is aimed at imprisoning doctors, it actually strips woman of fundamental rights. The right to control their body, reproductive choices, and their own future. This is only scratching the surface.

There is is something to be said about women that bring other women down. Femininity is all about supporting each other and that is why so many have such a strong sense of rage towards the Governor of Alabama. No one should be able to control what a woman does to her own body – especially the government. This applies to the 14th Amendment, the right to privacy. It is not the Governor’s body and it is not any of the Senator’s bodies. So, why are they trying to pass bills to control something that is not theirs to control?

No one really knows what another person is going through. No one should be required to explain themselves while making a decision to better themselves. It is their own personal affair.

Any doctor who performs an abortion for any reason other than if the woman’s life is in danger could face up to 99 years in prison. The amount of years that a doctor performing an abortion on a rape victim would be forced to spend in prison is longer than the time that a rapist has to serve, which according to Rape, Abuse, and Incest National Network, is an average of 9.8 years. How is that fair? A rapist takes control of a woman’s body, hurting her and manipulating her, and Alabama is saying that her act to free herself from a painful commitment that she did not sign up for is more criminal than the rape itself.

No rape victim should be forced into something that they did not have control over in the first place. It is not right. The government does not have this right. No one with political power has this right.

The right to abortion is a reproductive right that allows women to have control over their own bodies. Shocking, right? A person actually being able to control their own body. This right is as fundamental as it sounds. This choice of when and whether or not to have children is vital to a woman’s independence and future.

According to the 1992 decision in Planned Parenthood v. Casey, Former Supreme Court Justice Sandra Day O’Connor said, “The ability of women to participate equally in the economic and social life of the nation has been facilitated by their ability to control their reproductive lives.”

With this being said, making abortions illegal does not mean that abortions will end. Do pro-lifers actually believe that before Roe v. Wade, abortions never existed? Women have used coat hangers, knitting needles, ‘back alley” abortionists, and other methods that are as painful and unsafe as they sound. While the entire pro-life argument stands on the desire to save lives, ending safe abortions will actually put lives at risk.

These rights are not just about having control over our own bodies – they are essential to achieving gender equality. This freedom means having affordable access to all reproductive health care options, including birth control, abortion clinics, paid leave, and support for mothers.

“Nobody wants to get an abortion,” said actress Alyssa Milano, in a tweet reacting to the law,”We are all pro-life. But there are circumstances that we cannot avoid. … Just because there are women that don’t believe in abortion, don’t take away someone else’s right.”

There is no reason why a woman should have to face all the consequences from something she did not do alone. There are so many unfortunate circumstances that women have been placed in, financial crisis, being left by a partner, mental health reasons, incest, sexual assault, or even rape. Giving women options to prevent themselves from hardship is so important.

Many believe that this highly restrictive abortion law was directed to overturn Roe v Wade in the hopes of attracting the Supreme Court’s attention. Justice Stephen Breyer has already hinted at the possibility of the case going to the Supreme Court.

“Today’s decision can only cause one to wonder which cases the court will overrule next,” said Breyer.

The Republicans’ decision to sign this law into effect is outrageous. By prohibiting abortions even for rape survivors, the law threatens to anger the public and devastate the Republican party, ultimately decreasing the number of people voting for Republicans. It also threatens the seat of many Republican politicians, because of the immense amount of backlash. Republicans are just hurting themselves.

“In spite of Justice Breyer’s cautionary dissent, 5 SCOTUS Justices have signaled their willingness to overturn decades-long precedent to conform to their conservative ideological agenda,”  said Senator Mazie Hirono, a member of the Senate Judiciary Committee from Hawaii. “The stage is set to overturn Roe v. Wade, taking away a woman’s right to abortion.”

The American Civil Liberties Union and Planned Parenthood have promised to challenge the legislation long before the law takes effect.

“We vowed to fight this dangerous abortion ban every step of the way and we meant what we said,” said president and chief executive officer of Planned Parenthood Southeast, Staci Fox, “We haven’t lost a case in Alabama yet and we don’t plan to start now.”

The new law will likely be caught up in court battles for years to come.

Donations to abortion-rights groups and justice groups surged this week. Celebrities such as Cara Delevingne, Chris Evans, John Legend, Rihanna, Lady Gaga, Kylie Jenner, Liam Payne, and so many others have stood up on behalf of women, condemning others from taking these rights away from women.

The law that Alabama passed is stricter than abortion rules in various countries around the world, including India and Mexico. The U.S. prides itself on its progressiveness and yet, with this law, we are advocating for oppression.

Ultimately, the whole issue with this new law is the fact that the government thinks that they have a say in a woman’s personal choice. In no circumstance should this be allowed. Republicans have really stepped over the line by criminalizing abortions. Alabama needs to reconsider how many lives they are affecting and what kind of example they are setting for our nation with legislation that promises to leave women trapped in their own bodies. Although Alabama believes that it is declaring that the lives of babies matter, in reality it is telling women that their lives do not.