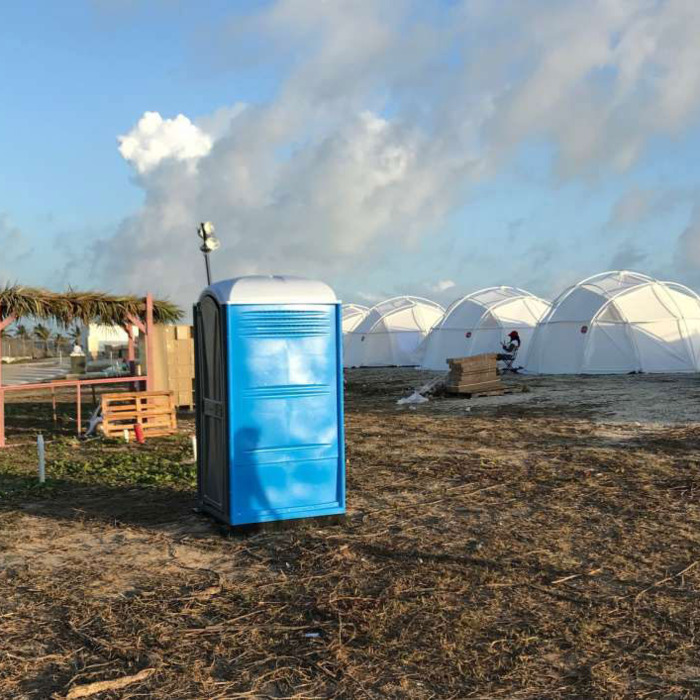 Festival goers expecting to have the time of their lives, were instead met with a scene of disaster.

It all started with a video shoot—Big name supermodels, including Bella Hadid and other models represented by her agency, ran around on a beach formerly owned by an associate of Pablo Escobar to promote a new, luxury, all-inclusive music festival that was billed by the organizers as being “a once in a lifetime experience.”

The festival, named Fyre Festival after Fyre Media (its parent company and a talent booking application), sought to entertain millenials like never before with VIP cabanas, tents, beautiful Bahamian scenery and some of the biggest names in music. These promises never came to fruition; instead, ticket holders were taken to Great Exuma, at a location a few minutes away from the Sandals resort, to find wet FEMA tents and total chaos.

According to Blink-182’s twitter, the group dropped out as the festival’s lead act a few hour priors to the festival’s start. The group did not believe that they had the resources needed for them to give the same quality of performance that fans are used to.

Once landing in Great Exuma, it took only a matter of minutes for attendees (and Fyre) to realize that the festival simply did not have the means of going on. Tents and mattresses were flooded, and there were no signs of any infrastructure for the festival whatsoever on the island.

Following many social media posts regarding the poor conditions of the venue, including a picture of a cheese sandwich despite promises of gourmet cuisine, as well as #FyreFraud trending, Fyre announced it would be postponing the festival, and would be working to evacuate everyone off the island as soon as possible.

Fyre Festival is universally regarded as a disaster. Two documentaries were recently released exploring how such a clusterfest came to be. The universe laughed at the idea of impressionable rich kids being scammed and trapped on an island, “Lord of the Flies” style.

According to an Oct. 2018 NBC News article, the festival mastermind, so to speak, Billy McFarland, was sentenced to six years in prison for wire fraud relating to the festival.

Behind the messiness and humor in the situation, however, lies a much deeper issue.

Fyre Festival was destroyed the same way it was created; via a single social media post. One video of models partying in a yacht sold thousands of tickets, and one post of a rotten sandwich turned the festival into the nations laughing stalk. The fact that social media played such a major role in its rise and fall is no coincidence.

Our generation is widely considered the i-generation because of the rise in technology in our lives. Never has society been so reliant on technology. It connects us. It drives the modern market. It’s delivers all of our information, most importantly, it has revolutionized the way that companies sell and market their products.

For Fyre, this meant putting the world’s biggest names on their payroll to promote the festival to drive their image as a luxurious Bahamian festival, despite being far from it.

The concept of being “internet famous” is a recent phenomenon.

According to Urban Dictionary, to be internet famous is to have a temporary and limited state of notoriety enjoyed by someone that is made public exclusively through the internet.

The most important component of internet fame is it does not involve talent, substance or longevity. It is simply the commodification of a brand, a manufactured image that ironically thrives due to its seemingly unfiltered access into one’s life. Internet fame is selling a product based on a delusion, and it has changed the way that we consume.

Fyre Festival embodies the danger of internet fame. The creators did not sell thousands of tickets based on experience. They did not sell based on a history of good products. They did not sell based on any legitimate reason that one would have to believe the festival would live up to expectations. They sold this crazy fantasy because internet famous people, from models to so called “influencers” endorsed it. That’s it. And millions bought it. Fyre festival represents the danger of selling nothing but a dream in this digital age, and it is not alone.

Internet famous people, such as YouTubers, or those who get paid thousands to post pictures on Instagram, make their money through sponsorships and ad revenue. Take the Kardashians for example. They’re the classic example of being famous for nothing, and they have no shame.

The Kardashians have been sponsored by all types of products, regardless of whether they use them.

When one is offered that much money, it’s no surprise that they would embellish the truth. The Kardashians have pretended to use hair gummies even though they have celebrity hair stylists. Kendall Jenner is the new face of proactive even though she has a well known dermatologist who cleared her skin. Kim Kardashian now sells lollipops that curb one’s appetites on her Instagram.

In this digital age, brands aren’t only taking advantage of this new generation of consumers through internet famous people, but also through our slang.

The internet has given a platform for young people to create an entirely new dialect. From slang that originated on Twitter (spill the tea, wig, skinny), to memes that have turned into inside jokes among generation Z, we have invented words, ideas and virality. We can make an internet post involving a meme or our slang go viral in a matter of minutes. And big brands have taken notice.

Marketing used to be about selling a product. What mattered most is the information was presented in a straightforward way. The “Wendy’s food chain” Twitter used to simply tweet about their new burger deal, for example. In this new age, however, companies have completely changed their approach.

Only in the digital age would it be possible to search “Wendy’s fast food” and the first article to come up would be an April 2018 Ritely article entitled “Top 22 Hilarious Roasts by Wendy’s Twitter.”

It may be funny to see Wendy’s use our jargon, or come for McDonald’s on twitter, but at the end of the day, they are large corporation. And they are commodifying our slang, and our memes for their brand. They are selling what we invented back to us.

According to a Dec 2017 Adweek article, Wendy’s social media team held a Q&A on the social media website, Reddit, in which people could ask questions and gift the Wendy’s team “reddit gold”; which gives access to special features and costs actual money.

Wendy’s brand image has proven so successful that normal people essentially gave their money to a mega corporation for nothing in return. This is not an isolated phenomenon. Many companies have been revered to a similar level. Brands like Wingstop, the NBA, and Verizon have all amassed viral tweets by capitalizing off of the meme of the moment.

As we go upon our casual, if sometimes obsessive, internet strolling, we need to be wary of who we are. We are not just casual scrollers. We are consumers. We are being sold a product at every turn, even if the product is simply a delusion. It’s time to think twice before we buy that ticket to the mysterious new festival that Bella Hadid posted about on Instagram.