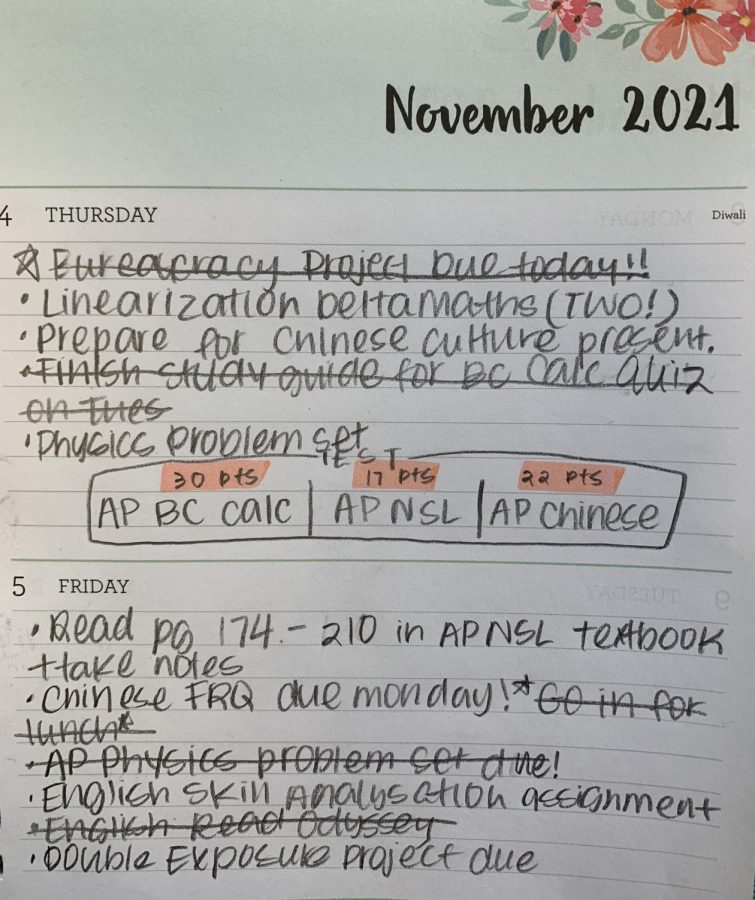 Students oftentimes find themselves cramming for the multiple tests they will have to take the next morning the night before, meaning that many of them are unable to truly reap the potential benefits of testing.

A messy scribble-scrabble of different pen colors, notes scribbled in the margins and overlapping due dates highlighted and marked with rows of exclamation points. What is this? A student’s planner. After the year of virtual learning, students have been thrown into the churning sea of homework, projects, quizzes and tests, and many are struggling to keep their heads above the water.

Many students have multiple assessments crammed into a single day. For those already grappling to keep up with the workload of challenging classes, this can be fatal. Having to study for and stress over these overlapping tests, that have large impacts on grades, can be harmful and is counterintuitive. Instead, teachers across departments should work together to build a new, more productive system for scheduling tests at WCHS.

Although most students try to avoid cramming for their tests, it can oftentimes become inevitable as they juggle academic, extracurricular and personal commitments. When multiple tests in one day are added into that mix, students can end up pulling all-nighters to adequately prepare for all the information they will be expected to understand.

Cramming, in theory, allows a short-term recall of information that will be sufficient to take the assessment. However, it has been proven time and time again that when large amounts of information are processed in a short period of time, deep processing, where the brain creates more meaningful and long-lasting connections between the concepts, cannot occur. In short, the learning is surface-deep.

Furthermore, cramming is often done at the expense of sleep. These squeezed study sessions have a detrimental effect on the mental and physical health of students, as well as their performance.

Moreover, in a 2012 study conducted by the University of California, Los Angeles, high school students were surveyed about how much they slept and studied respectively each night, as well as how well they performed on tests and schoolwork. Researchers found that when students sacrificed sleep to cram for tests, academic performance visibly suffered.

Every teacher’s goal is for their students to understand and retain the information they are being taught in-class. However, in the current situation, this can reasonably be viewed as unrealistically optimistic. When students are running on a highly-caffeinated combination of no sleep and pages of notes jumbled up in their heads, how well can they be expected to perform?

Instead, the number of tests a student takes per day should be limited as much as possible. One efficient way this could be done is for an interdepartmental testing calendar to be created. Each department would, in theory, choose one day out of the week to give tests for their subject area.

As a result, the workload of studying for tests would be better spread out throughout the week, giving students more time to effectively comprehend the material. For example, the student who previously had tests in AP Calculus, AP Physics, AP Government and English on one day would have their English test on Monday, math test on Tuesday, government test on Thursday, and physics test on Friday.

There will, of course, still be overlaps of tests. Unexpected events will result in some tests not being able to adhere to its designated date. However, by creating this rough schedule beforehand, students know what to expect and can create more efficient routines. They can plan out their week, knowing from the beginning of the week that they will have an assessment on Thursday in a class. Additionally, by allowing for better communication between the various departments regarding students’ academic performance, this paves the way for more improvements in the future.

Those who say that the students have only themselves to blame for procrastinating until the last minute should be shown a typical high school student’s planner. In today’s society, high school students hoping to get into a “good” college are pressured into having, and succeeding in, an overload of academic and extracurricular activities.

It is proclaimed by many college admissions websites that they are looking for examples of leadership, service to the community and students stretching themselves to their fullest potential, with stellar academic performances as a given. If students were to focus solely on academics and devote all of their time to studying for these overlapping tests, they would most likely find themselves at a severe disadvantage. Instead of accusing students of procrastinating, a better learning environment should be made.

This solution is not proposing to eradicate testing. As Scientific American said, “Research in cognitive science and psychology shows that testing, done right, can be an exceptionally effective way to learn.” But when this testing is done in a way where students walk out of the classroom forgetting the information they were just tested on to retrieve the hastily memorized notes for their next subject, is the full potential of testing truly being applied? The answer is no.

Teachers work to create more productive academic environments for their students to thrive in, and this change would be a meaningful step in the right direction. The suggested interdepartmental testing calendar is a feasible plan that will ensure students are testing in conditions that allow them to retain a true understanding of the content. For the good of everyone, this calendar needs to be created.