WCHS hallways are not COVID-19 safe 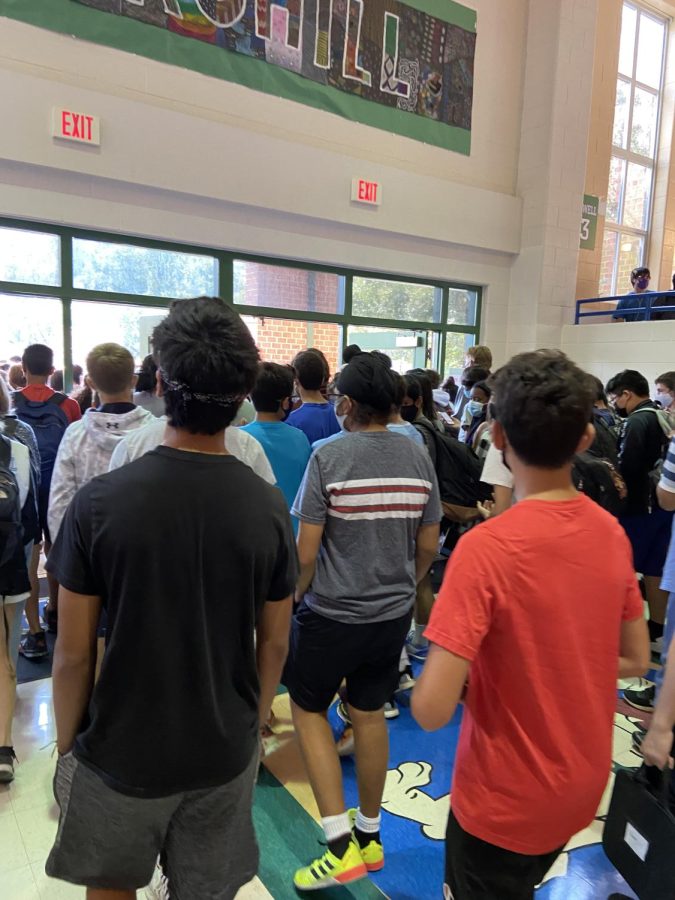 Students line up in the hallway, waiting to get out of the school. The end of school is one of the most risky times for students, as every student in the building lines up to go out the same few exits.

As a student takes a step in the hallway between periods, they look over and see several students near them, all within six feet of each other. Such is life for WCHS students, and in the rush-hour-esque hallways of WCHS, the problem does not seem to be going away soon. It should be an easy decision for school administrators – make the hallways safe for the over 2,000 students of their school.

COVID-19 safety is (reportedly) a huge focus for MCPS at this time. But for a county that prides itself on being “aligned with CDC guidelines,” the hallways have the exact opposite of six feet of separation. It’s not an unfamiliar sight to see 50 to 100 students in one hallway, all shoulder to shoulder, waiting for the traffic to subside.

This issue was overlooked by MCPS, but less so by parents. When the Montgomery County Health Officer, Dr. Travis Gayles, stepped down from his position on Aug. 18, concerns over the hallways were a prominent concern. According to WTOP, before the start of school, multiple parents voiced their concerns about overcrowding in cafeterias and hallways.

At WCHS, the issue is compounded by the intense overcrowding in the school. In a 2019 article, the Observer referenced a Maryland Department of Education study that found WCHS was incredibly overcrowded, and had eight students more per class than the state average. When students are all released from classes at the same time, the hallways aren’t big enough to provide much room to walk during normal school years, disregarding the six-feet necessary during this year.

With the COVID-19 policy of MCPS, only students that had direct contact with a COVID-19 positive individual are notified. This includes people sitting near a positive student in class, but doesn’t include anything that happens in the hallways. This contract tracing policy might make sense on paper – the greatest risk for transmission is when someone is exposed for over 15 minutes. However, a COVID-positive student can easily spread the virus in shoulder-to-shoulder hallway traffic while waiting minutes to get through.

Further complicating the issue is the usage of masks in the hallway. While a teacher is around to enforce mask usage in the classroom, less can be said about enforcement in the hallways. Although almost all students wear masks in the hallways, the few students that don’t can put everyone within six feet of them at risk – up to 10 people at a time.

The heart of the problem is overcrowding at WCHS, and this is a problem that must be solved in the long term. Whether the solution is building more schools in the area or adding expansions to the building, there are an unsustainable amount of students in the building, and the issue is exacerbated by the distancing requirements.

For now, the WCHS administration must take steps to decrease the crowding that occurs in the hallways. This starts with spacing out bell times by a few minutes, staggering the amount of students in the hallways between classes. Different grades could go at different times, or different classes could be dismissed two minutes before the class next to them.

Whatever the solution is, WCHS must take steps to protect students during this important time. Masks are an important part of that, but they cannot be the only solution. During the reopening last year, MCPS put in place many systems to protect students, like one-way hallways and more strongly encouraged outside lunch. This year, not only are the one-way hallway stickers gone, but so is every system from last year. To keep students healthy, this much care is required.