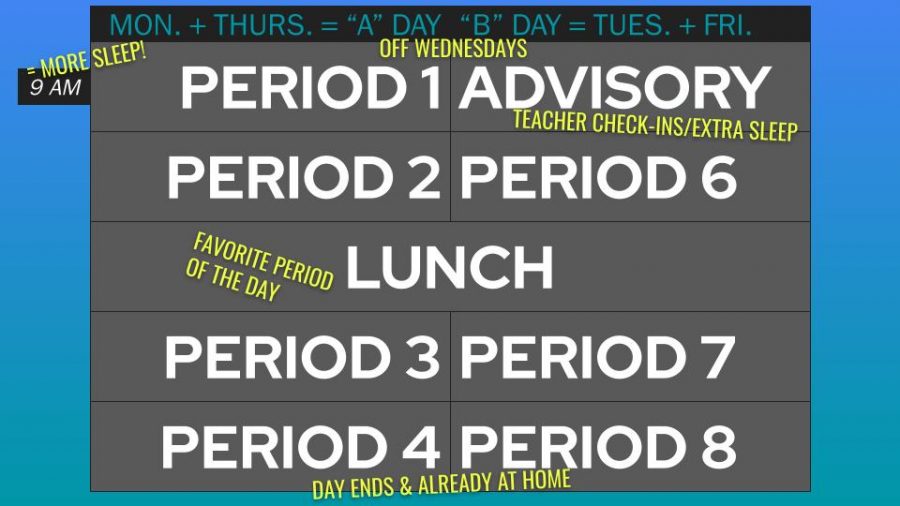 A glass half-full person can find good in any situation. As this crazy school year comes to a close, there’s been a lot of positives, even though it has been easy to find the negatives: a deadly pandemic, learning at home and everything in between.

If you look hard enough, there have been many bright spots in a rather dark year. From the schedule to the at-home benefits to what this school year has taught us about resilience, there’s been a lot of good in an otherwise not-so-good year.

How about starting off early, because that’s one thing that hasn’t been done this year. In other years the first period of the day begins at 7:45 a.m. But, that didn’t mean you could get up five minutes before — unless you had some superhuman ability. It usually meant waking up earlier to be ready to get in class by the time the bell rang.

With virtual learning, it wasn’t hard to wake up at 8:55 a.m. and still be in class and ready to go. Could one wake up at 8:55 and not have to worry about being late to class? You bet. Of all the things that you’ll hear in the hallways during the mornings of next school year, expect “remember when we could wake up five minutes before class and still be there?”

And, if mornings aren’t your forte, you’re seriously gonna miss the first period of B days. From advisories to optional club days and teacher check-ins, the average Tuesday and Friday mornings were a nice, smooth way to start off the day. Most of the time they were quick lessons that gave you plenty of time to take a mid-morning nap. Classes didn’t start until the 10 o’clock hour on those days, giving the added benefit of another hour of sleep.

Speaking of added benefits, the lunches this year were longer than in the past. Yes, the lunch period in the building lasted 55 minutes. But this year, it lasted anywhere from 70-75 minutes. With that added time, came the ability to get work done, go out to get food and the opportunity for a midday nap. While it’ll be a cut for next year, at least lunch is still going to be long enough that you’ll have time to eat, talk and get whatever you need done.

If days of the week were like houses, then Wednesdays (when we were off) would be a mansion. Who could complain about essentially getting a day off. While there were teacher check-ins (used by most infrequently, if ever), it really was an opportunity to sleep late, catch up on homework, hang out with friends and take a little personal time. Wednesday off will be missed for all of those who enjoy time off.

The reason that most Wednesdays weren’t school days was because of the block schedule. “A” days (the first four periods) usually occurred on Monday and Thursday; “B” days (the final four periods) were usually on Tuesday and Friday. It was nice because students didn’t have to rush to do homework (except on the awful times when there were back-to-back “A” or “B” days). Procrastination was almost encouraged — well, at least meaning it wasn’t due the same day as the assignment was given.

Getting home (and leaving for school) is a bit of a process. Not this year, as transportation meant bed to desk or kitchen table, instead of WCHS. There was a lot of praise for the shortened transportation time. And not driving saved money (a benefit for the economically-conscious), time (great for the “time is money” people) and the environment (meaning it earned two green thumbs up). Thumbs down for the parents that make their kids walk to and from school for “exercise.”

Another thing about the building that was not missed: the bathrooms. Having the ability to go whenever you wanted, in a (hopefully) nicer bathroom was an advantage. Forget holding it for seven hours; at home holding it might mean for a single, hour-long class. Plus, no one-ply toilet paper.

And then we can always think about adaptability. Remember when school meant sitting in a classroom? School can now be done online at a bedroom desk, a kitchen table, in bed or (my personal favorite) face up looking out your car’s sunroof.

And the same can be said for getting back in the building. The layout and procedures had to be adapted — gone are the days of crowded bathrooms that looked more like the social halls of a retirement community.

Because of the block schedule and being off on Wednesdays, there was less work. In the pre-pandemic days, a day without math homework was about as rare as a kid turning on their camera on Zoom. Over the last year, with classes held biweekly, instead of daily, there’s a lot less homework. And that finally means a break!

Next year, according to Montgomery County Public Schools, we’ll be back to normal.

For the last few days of the year, take it in. Think about all the things that will be missed next year. Truthfully, the adjustment away from a 9 a.m.-start during a four-day week will be hard to adjust to. Definitely not looking forward to it.

600,000 Americans have died and tens of millions have been infected. It’s hard to find a bright side to that. But, in the darkest hour, the light of optimism shines the brightest. As the former Prime Minister of the United Kingdom — and the namesake of our school — Winston Churchill once said, “I am an optimist. It does not seem too much use being anything else.” We will do our best to follow your words — and see the glass half-full.