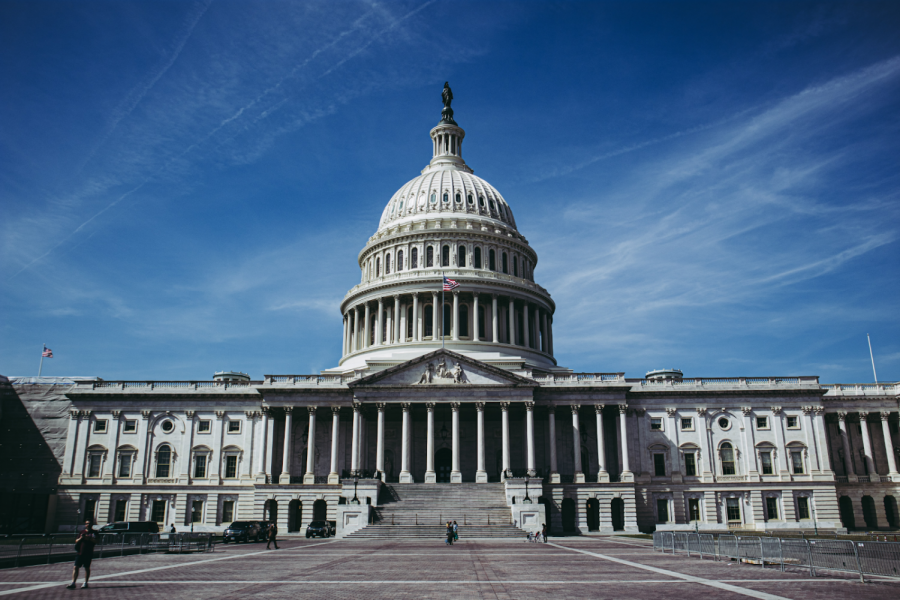 The US Capitol Building which houses congress looms over DC just miles from WCHS in Potomac, MD. Despite this proximity, and notable other governmental influences like MCPS’s Board or Montgomery County’s government buildings, The Observer for the most part avoids publishing anything political.

Across almost all parts of my life spans politics, government and policy; I follow stories, develop opinions and hold unending and pervasive discourse about all matters scaling neighborhood to national. Yet, as a writer for WCHS’s student publication, The Observer, and a News Editor, you will not find a sole political opinion across any of my many published stories.

This is not because I have tried to remove politics from this part of my life and expression, but rather the opposite- I was never given the opportunity to properly approach political subjects. Not only this, but many journalists such as myself, across a spectrum of political activeness, have had political ideas and opinions rejected, prevented and systematically extinguished. The cause of this effective political censorship cannot be placed on a rogue year of Editor-in-Chiefs, an unfair teacher or staff leader or any one group specifically, but a grown culture of anti-political coverage and publication.

And I raise this issue not to shame those who have become comfortable reinforcing this culture, but to make the case that The Observer, a paper truly run and produced by and for WCHS students, is denying its own members critical opportunities and not reaching its full reading potential. Although political opinion and publication brings a certain degree of issues with risk or inadequacy, the rationale behind censoring writers to avoid politics and specifically political opinions is problematic and incorrect for many reasons- the main of which I will lay out now.

To start, it is inane to think you can remove politics from news, human stories, community developments or life in general; running any community media publication sans politics noticeably undermines the legitimacy of said paper. Politics affects all aspects of our lives directly or indirectly, and to widely block out the topic brings inherent failure to our publication in its inability to function as a true expression of community life and discourse. It is hard to command true respect as publication, the respect the awarded Observer does deserve, if we cannot such important issues whether it be national subjects, county politics or WCHS events and incidents.

As well, removing politics from our vernacular ignores that certain messages cannot be shied away from. Dwelling in the stable economic bubble of Potomac, MD ignores that governance and politics matter, and they have real effects on many lives. As one of the most politically active and expressive generations, removing the taboos on politically oriented subjects can promote student expression on many important subjects of race, gender and sexuality, civil rights and other social issues that are necessarily seeing increased light.

WCHS has seen monumental and consequential events such as the N-word pass incident, Nazi incidents or more recent Anti-Asian racism incidents; these, among a slew of other incidents and cultural issues that unfortunately, but definitely exist within WCHS. Publishing about these kinds of topics and problems is often inseparable from politics and policy, and can be weakened or avoided completely when navigating The Observer’s current culture. The Observer’s true place should be helping shine critical light on these specifically WCHS incidents and breeding a culture of increased openness and transparency. Even more broadly, this speaks to the simple but all-important freedom of press that begins to lack when any type of censorship is present.

Most importantly, removing politics and specifically political opinion from the primarily student run publication sends a sharp symbolic message; a message that student journalists and high school political voices do not matter, or at least do not command enough respect to be published. The impact is simple but striking, and visibly contrasts the confidence put in students in almost every other area of academics. Students publish their opinions and thoughts online in many forms, whether on social media, personal blogs or other non-school publications; there are simply too many intelligent and compassionate student journalists with well-informed or worthwhile individual opinions to create a culture that prevents even the best of them from seeing light.

Likewise, one must acknowledge that a publication and an individual voice can function separately. A lazy and sweeping culture of political avoidance on a general scale should not be allowed to rule out students’ ability to publish their individual opinions in their own paper, as approved and reviewed to be appropriate and civil.

And that is where my critical and winning concession comes in, this argument is not to say students shall have free reign with everything political and opinionated, and should be able to effectively voice whatever opinion they possess on whatever subject captivates them most. I would never advocate for such a system, and to cast that as a danger justifying The Observer to avoid politics ignores the reality of the strength and intelligence of The Observer’s staff and leaders.

For any article or social media piece to make it through publication it must already go through a class-wide brainstorming, section proposals, a minimum of three rounds of separate editors and a final okay. Political articles would be subject to the same process- if not a more arduous one. So while it is true that publishing politics in a high school paper can deal with the problems of issue irrelevancy due to publication cycles, unqualification within certain issues and possibly even offensive content, all of that can be easily and consistently vetted through routine processes already found within our paper.

Even more so, the options for amending or enhancing The Observer’s publication system come with extraordinarily low overhead and great flexibility. Opening up an editorials section, or allowing politics to become a larger part of the current news section are readily available options. Methods of simply labeling articles as political opinion are ripe among an online paper already tagging and syncing articles to sections, authors and key terms.

Notably, a system such as this is not unrealistic in the slightest, as when looking to WCHS’s geographically and academically closest school, Thomas Sprigg Wootton High School, their student paper- Common Sense– regularly publishes the political material The Observer does not. The paper allows for publishing of political opinions as well as articles covering political subjects.

Ultimately, although the culture of political avoidance grew over time in somewhat logical ways, it’s growth has actually done much more to undermine our paper than ever strengthen or protect it. The culture’s lazy and sweeping reach sends impactful messages both to student journalists and readers that their voices don’t command enough respect to fill their own publication, and avoiding much of what in reality matters pulls the teeth from a student paper already needing new ones.

In this nature, a cultural change in The Observer could be of critical benefit; the added legitimacy and possible student attention could help an imperfect paper in an imperfect and shaking field. WCHS students seem to be more engaged in activism and politics than ever before, empowered by massive societal movements and social media’s spread of information and truth.

Adding real issues of societal, governmental and political importance to The Observer’s monthly barrage of arts reviews, club exposés and endless features could attract new student attention that The Observer is in desperate need of. Moreover, allowing student journalists to write about issues they are realistically passionate about outside of class and school, and affect their lives in tangible ways, could do wonders in inspiring The Observer’s own writers.

All in all, the world of print journalism and The Observer alike face challenges of industry lethargy, and so when presented with a change that would not only remove problematic bounds on its writers, but possibly inspire new readers, the change is necessary. This is an incredibly easy yet incredibly impactful change The Observer needs, and one that will no matter what bring increased legitimacy, community representation and truth to The Observer’s proud pages.