Choosing a college major should be a decision made later 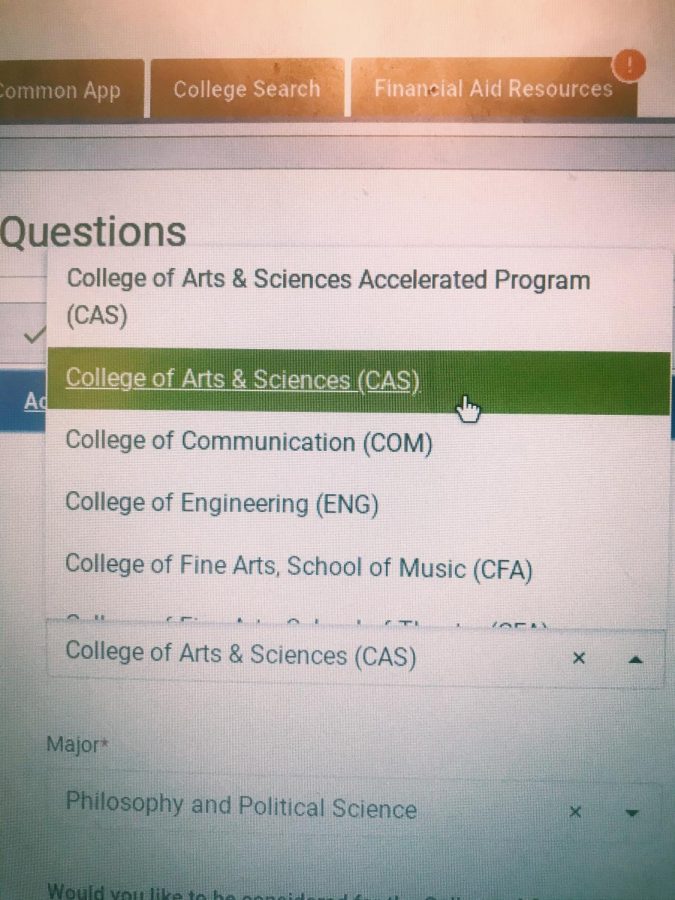 A student chooses which school to apply to from a dropdown on the Common Application. This will determine which majors they can take in the future.

The question, “what do you want to be when you grow up?” has always been a whimsical way of making small talk. On high school applications however, it declares and even defines your future.

As the Jan. 1st deadline nears, WCHS students are scrambling to finish their applications. Almost every application asks students to select a prospective major from a dropdown of options. While this chosen major on the online application does not mean that this is the major that admitted students will have to continue on for the rest of college, it does limit them to certain schools.

When a student selects a possible future major, at most schools, they are applying to the specific school in which the major is available, not the entire university. If they apply to be an English major, in most cases they cannot switch into a pre-med or a business major– these majors are offered in entirely different schools. The schools within a university usually include a business school, a school of arts and sciences, an engineering school and more.

If students choose to pursue a major within one of the schools that does not have as many offered majors as other schools, without even knowing it, they are greatly limiting themselves the second that they make the selection.

When students are applying to a certain school and choose a prospective major on their application, this is the school that they are admitted to. With that being said, if they decide that they dislike their chosen major and want to switch majors, which many students end up doing, they must choose between the majors that are offered in the school that they originally applied to. They don’t have the freedom of  picking any major they want.

Students pick their prospective majors before January of their senior year. They are picking the school that they are confined to in January of their senior year, before they have taken any classes at the university. In most cases, students are picking this school before they have even taken any classes outside of high school. Even if a student is going into college undecided, on most applications they have to choose undecided for a certain school. They cannot choose to be undecided to the university.

In this way, students are somewhat choosing their future on their application. While students can switch from one school to another within a single university, it is an entirely separate application process. It is inconvenient, stressful, and the admission into one school in the university does not guarantee admission to another.

While it is understandable that admissions officers must judge credentials of a student for admission to a certain school, students should not be limited by the selection that they made on their laptop in an application to a school they didn’t even know they would attend.

Since students are probably struggling to complete multiple applications, they may not be putting too much thought into the major selections on their application. After all, many of them are under the impression that they can always change this selection later.

As we near the end of the application season, universities should consider exactly how much weight should be put on the choices that they asked students to make before they were even admitted into the school. They should consider waiting for this choice to be made once students choose to attend their university.