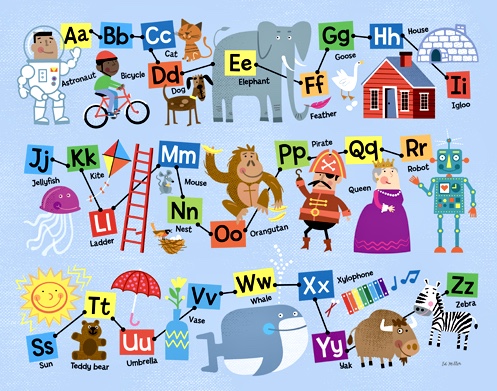 The new alphabet song is not being received well online. Despite there being some benefits for non-English speakers with this newer version, the general creation arguably serves as evidence that in modern day living, pushes children into learning material at a quicker rate to contribute to a collectivist society.

“A B C, easy as one, two, three; simple as Do-Re-Mi,” The Jackson 5 once sang. Yet, the gaining recognition of the new alphabet song has everyone in shock and disdain for its new rhythm and beat. Sung by Matt of the Dream English Kids youtube channel, he rids of the confusion for the 5 letters that embody the bane of many childrens’ existences: the infamous “LMNOP.” If the alphabet is so easy, then why change it? The reason is simple: to make things unnecessarily easier for children.

A main factor in why people are upset by this new version of a well-known song used in elementary schools is simply due to tradition—“that’s not how I learned it back in the day,” as some opponents may say. While this may contribute to feelings surrounding the topic of the new ABC, in reality, it’s more than that. When thoroughly looked at, the problem with this track is not only personal misplaced nostalgia, but the societal question of why we feel the need to make simple things even simpler.

Supporters of this new ABC version argue that with this newer release, this can prevent any confusion of “LMNOP” and make these five letters more differentiable from each other. And though this idea holds some truth, in reality, it is not entirely necessary; the fact that this newer version is made solely to make the alphabet—a mere 26 letters—easier only pushes for a society that pampers kids and wants them to learn at a quicker rate.

Jo Boaler, a British educator and Professor of Mathematics at Stanford University, finds that struggle is necessary in learning.

According to Boaler, she works with numerous mathematicians, and with this comes her witnessing the slow process it takes for students to finally understand. Despite this, Boaler makes it clear that this slow uptake of number and of learning is not a bad thing. If anything, those who are slow are deliberate only because they are truly digesting and thinking of the subject at hand.

Whether it be Math or English, numbers and letters are both the foundation of their respective subjects. The fact that Boaler, a professional in her department, believes that one’s understanding of numbers should not be measured by the time it takes for an individual to learn them, why should it be any different for letters? We should allow kids to take their time in absorbing the information, rather than implementing new songs to cater to their every whim.

If a child is truly struggling with the “LMNOP,” then this should be  the opportunity to introduce children to the idea of perseverance. It is also said that children are sponges for how they quickly absorb new information; with the effort of an adult, this 5-letter obstacle should be easy to overcome.

So why does society feel the need to implement this change to the elementary school system when all it takes is the determination of a student and an adult who is willing to guide the child? Maybe it is the increasing inattention to the youth—a society that allows iPads and general technology to babysit the children.

According to a Jun 26, 2013 article from the NY Daily News, the statistics of parents using technology as a babysitter are high. The NY Daily News article states that respondents with at least one child between 2 and 13 years old use technology and as a means of child care twice a week. Their reasons for doing so range from taking a break from their role in parenthood, or just wanting some “me-time.”

Without a doubt, since 2013—the year this article was published—there has been an exponentially growing reliance on technology. Therefore, there is bound to be an increase in this average number of times a parent relies on technology as a babysitter per week. This new alphabet may as well be just another way to falsely compensate for the adults’ retreating parental presence, and another way to utilize technology to babysit and teach kids things they should have the honor of doing.

Of course, this also stems from a societal issue: in our modern living, there is more of a push to attain material quickly, and this newer version of our ABC’s only supports the idea that we are constantly on the move and that there is an evident push for students to grow up in order to contribute to society. As a result of this thinking, the new alphabet song and rhythm may as well serve as a means of conformity—no matter how insignificant this change to the song may seem on the surface.

Though the new song for the alphabet may not appear as a big deal, it is the foundation of all communication, so the way in which we learn it is crucial. Children should be able to push through something as simple as the differentiation of 5 letters. However, if the child is truly struggling, an adult should be willing to put in the time and effort to educate; this should be the solution and the approach to learning, rather than being quick to serve them easy alternatives on a silver platter.

Once the ABC’s are learnt in its original form, it demonstrates a sense of learning and accomplishment in a child’s ability to persevere through something subjectively difficult like “LMNOP.”

Check out the new version of this new and controversial ABC song at: https://www.youtube.com/watch?v=-I7v0HqejXE