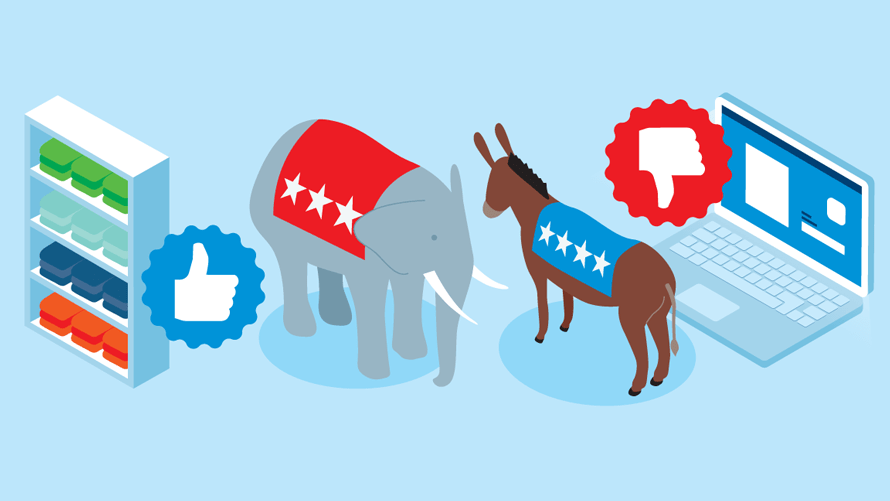 Whether they are conservative or liberal, modern day consumers are considering a brand's stance on social and political issues as a factor in their purchasing decisions. Though it is an effective marketing strategy, companies need to think twice before publicly announcing any stance.

There is a new trend in the shopping world, and it is not the latest shirt or shoe, but rather the disclosure of a company’s position on social and political issues.

According to a 2018 Eldman Earned Brand study, 64 percent of consumers worldwide take into account a brand’s stance on politics in addition to a company’s designs and fashion when making a purchasing decision.

Companies decades ago who would have preferred to keep a low profile on politics are now weighing in on issues ranging from gun control to immigration to climate change. And there is good reason for it.

From an economical standpoint, research from Weber Shandwick revealed that millennials are significantly more likely to buy products from, as well as work for companies if their CEOs come out to take public stands on controversial issues that impact the company.

From a social standpoint, companies are doing good for society as they are able to use their platforms to shed light on and promote awareness on important issues among consumers. With the help of the influence of social media on consumers, brand political activism is becoming a new marketing strategy and attention grabber for companies.

However, although brands are feeling the pressure to take stances on social and political issues, politics is still a risky business for companies to be in. Brands need to think twice before leaping into activism.

A 2017 report from the American Association of Advertising Agencies revealed that 58 percent of buyers disliked marketers who took political stands. Though it may strengthen brand loyalty among some consumers, it also stifles growth beyond those dedicated customers. It can create a divide among the company’s buyers.

One of the first brands to take a stand on social and political issues was Nike. Its ads and commercials featuring Colin Kaepernick, an American football player who openly campaigns against racism and discrimmination, have drawn a line in the sand between supporters and opposers of the athlete. The campaign was very controversial as it prompted many individuals to post photos and videos of themselves on social media burning their Nike products, using the hashtag #JustBurnIt.

Brands must dig into their customer’s values and personas before publicly announcing their stand on an issue.

According to Amanda Gaslow, the U.S. chair of Edelman, a brand must understand its audience and think long-term so that the stand it chooses connects its values to its customers. One of the best ways to find out buyers’ opinions on issues is to simply ask them. Brands must talk with them in order to know their feelings on their company entering the political scene. Depending on the majority opinion, that’s how a brand should proceed.

Another prime example is when Dick’s Sporting Goods announced its position on gun control. After the mass shooting at a high school in Parkland, Florida, the company announced that it would no longer sell assault-style weapons and that they would stop selling guns to consumers younger than 21 years old. This news led to numerous major gun companies like MKS Supply and Springfield Armory to quit doing business with Dick’s Sporting Goods. The National Shooting Sports Foundation also announced plans to remove Dick’s membership and the National Rifle Association (NRA) called the company as an enemy to the Second Amendment.

According to a 2018 Vox article, just 10 percent of the Dick’s Sporting Goods’ revenue comes from gun sales. In the third quarter of 2018, earnings were higher than expected, but shares were down overall.

Taking a political stand may be the morally right thing to do, but it does not mean the company will not face consequences.

The public can sense when a brand is not being authentic in its messaging. In 2017, Pepsi sparked a controversy when it released an ad starring model Kendall Jenner handing a can of soda to a police officer at a staged political protest. To customers, the ad’s message was unclear and confusing. Critics also took issue with the fact that the ad centered around a wealthy and privileged white model who is not known to be active in championing social issues. Pepsi’s attempt to have mass appeal backfired.

The connection between the message and the value must be genuine and authentic if brands want support to follow. The message must resonate with customers and must be true to a company’s core beliefs and values. Brands can do more harm than good if they go in with false intentions.