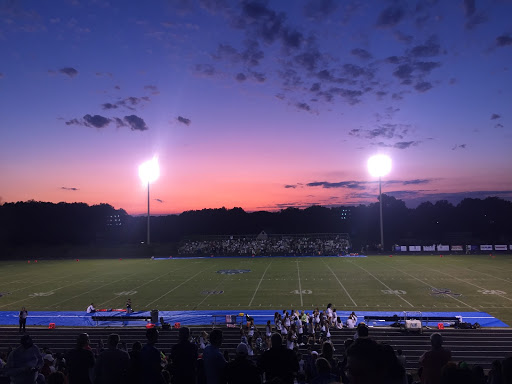 The sun sets during WCHS home opener football game vs Walter Johnson on Friday, September 6, 2019. It costs $3 for students to attend the game

On Friday nights, there are many different activities for WCHS students to go to –– shop at the mall, watch a movie, hang out with friends and attend school events. Also, WCHS students can go to football games every Friday in the fall, either at home or away.

Tickets for football games costs $3 for all students. It costs $1 for children aged 7-11 (children under six are free), and $5 for adults. While there are season passes for the entire year or by sports season, they cost more than all the home football games combined.

Not all students work, have an allowance or make an income, so paying $3 regularly may not be an option.  Students should not have to make the decision to eat or save for college or go to watch a football game.

Valuable social time is being lost because students are forced to be more concerned about money, than enjoying their youth. Football games are a great way to meet new people and socialize, yet these students can not do that. Friendships are important in high school, and these students are deprived of the opportunity to enhance them and even make new ones.

In addition, the stadium sells food that costs money. Many fans buy a drink, pizza or a snack there, providing the WCHS Booster Club with money. The booster club can easily increase the price of drinks and food, by as little as 10 cents. This would make them additional money.

Free football games will increase school spirit because students want to participate in the event, which could include wearing a specific color, or dressing up as a character.

According to the magazine IAVM, “Students love free stuff…Increasing attendance with students has a lot of great benefits.”

At the University of Wisconsin – Eau Claire, they let students attend the football games for free. They also have spirit days, that many students want to participate in.

According to the school newspaper, The Spectator, “The first method Eau Claire is employing is making the game free of charge for all students when they present their student ID. This is a great method for attempting to get students to attend, because a lot of students already have to call home to get the two dollars. People love dressing up and immersing themselves in pop culture, so having a night where fans can do that and also take in some sports is a win win situation.”

Students want to attend school-events like Homecoming, Prom and club events and could feel more inclined to go if it is free. One of the biggest reasons people do not go to these school events is it costs too much.

There are also students that hop over the fence, or sneak in without paying. It is not like WCHS would be losing any money from those students, they did not pay in the first place. It would also reduce the chance of people hopping the fence or sneaking in, since it is free.

WCHS would only have to waive the fee for students who attend WCHS, not just anyone. Adults and students that do not attend WCHS should still have to pay.  There may be some controversy and confusion over how WCHS would know who really is a WCHS student. The school could do something to stop this.

WCHS could require all WCHS students to show their school IDs, and if students do not have it, regardless of if they are WCHS students, they will have to pay the $3 fee to non-WCHS students.

The school does take in a lot of money from the games, however. If WCHS has 700 students going, WCHS has made more than $2,000 which can be used for the school or football team. It’s unrealistic that the school would want to make such a valuable activity, free.

Students feel like they should not have to pay for something that they can do for free — at a house or at the mall — socialize with their friends. If football games were free, students would want to go because they could hang out with their friends, without paying for it, just like before school, after school, and during lunch.