School ranks: the downfall of students? 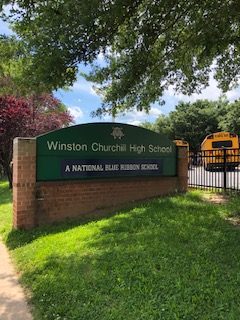 Winston Churchill High School has prided itself for many years on being one of the best, with their national blue ribbon ranking being displayed in front of the school.

From number one to number twelve, WCHS seems to be on the decline according to US News magazine rankings of the best high schools in Maryland. There are many theories as to how this happened, but the most accepted theory is that WCHS and three other schools across the state were missing crucial information that would have been included in their submitted scores.

Walter Johnson, Poolesville, John F. Kennedy, and WCHS high schools were all missing essential standardized testing information, which drastically lowered their rankings. The confusion and upset this has caused makes some people question why schools are even being ranked in the first place. US News, the same organization that created these rankings, wrote an article correlated to this idea.

The article talks about how competition is ruining kids’ lives. According to a US News article from 2018,  49% of students in the U.S. feel stressed and alienated by competition in school. This includes school sports and clubs, and also includes competition between schools.

At WCHS, many students would say that there is an ongoing rivalry with Wootton High School. While this can create some fun banter at sports games, it can also be putting a strain on friendships. Students from Cabin John Middle School were split in half, with students from Seven Locks and Bells Mill Elementary schools going to WCHS students from Cold Spring and Stone Mill going to Wootton.

In middle school, many students from these schools made good friends only to be split up and pushed even further apart because of this rivalry. Last school year, WCHS was the number one school in Maryland, followed very closely by Wootton. This year, the drastic drop in WCHS’s placement in the list might be proving as a wakeup call for Maryland school administration to stop this unnecessary competition.

Nearly half of the students in Maryland agree that these competitions are not good according to the US News article. If this isn’t enough to convince people that there is an issue with pushing competition on young people, the article also states that, 70% of students in the nation drop out of competitive activities before high school.

Competition is a natural part of life, but too much competition can cause a strain on people’s lives. Students drop out of competitive sports because school itself and its grading system create enough competition for most students. Always being in a race to win can be tiresome and can often take a toll on other important aspects of a student’s life such as sleep, exercise and even family relationships.

Ranking high schools is not a good precedent to be forcing on future generations of students. Students’ lives are only getting more stressful and unnecessary competition should not be legitimized by MCPS in the process.

This slight downgrade in rankings should not have such a large impact on WCHS. Many emails were sent out afterwards, and the MCPS central office began to investigate how the scores were calculated. Overall, it seems that ranking high schools does more harm than good.

Ultimately, it doesn’t make sense for students to be put under so much pressure in school only to be put under more stress when they don’t need to be. It’s time that students forget about being in first place or last place and think more about the skills that they are learning that will help them throughout their lives.