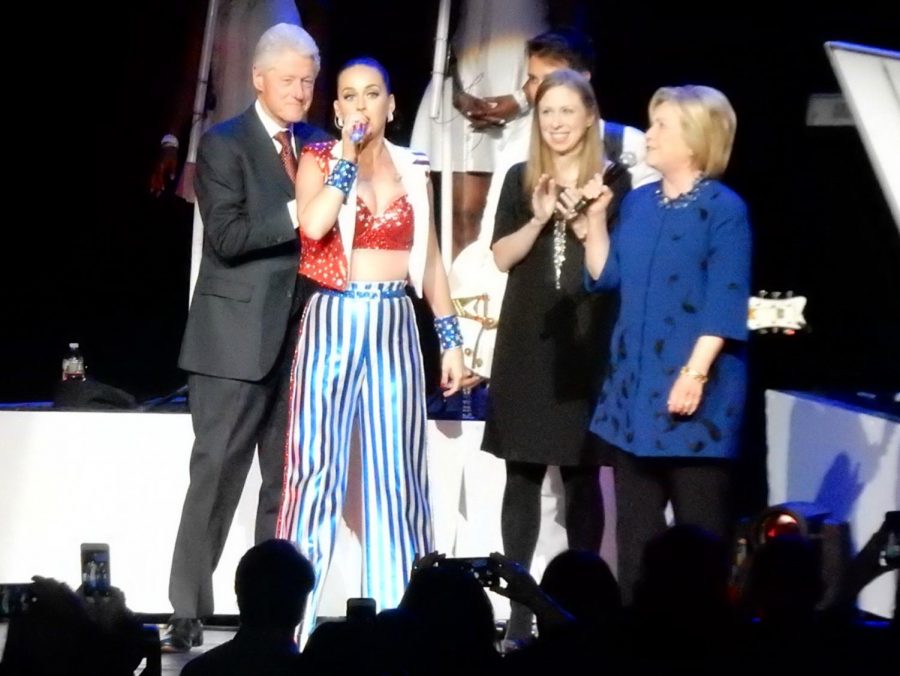 Katy Perry (2nd from left) speaking at a Hillary Clinton rally. The singer/songwriter hinted at a presidential run in 2020 on Instagram in 2018 in a picture with Bill Clinton and George W. Bush.

In times of turmoil and trouble, America looks to its celebrities to bless their wisdom upon the people and guide them to peace… not.

Many of these celebrities were joking, but others were not and seriously consider themselves potential candidates. These stars should not run for president because it diminishes the importance of the political system and leads to underqualified and misinformed people in places of power.

In America, the president serves as both a public figure to inspire the masses and a head of policy making. Although the system of checks and balances prevents them from wielding too much power, they still represent this country and make many important decisions. A celebrity as our leader makes a mockery of America’s history and makes the role of president a political pawn.

Having significant political experience under your belt is not an option; it is mandatory. Anyone can have good ideas on what steps the country should take, but very few can make their desired policies a successful reality. The president should be an expert on foreign policy and legislation making, or they risk the livelihoods of all citizens. It is not enough to simply have strong beliefs and a strong political team.

All presidents prior to Trump had extensive political experience as lawyers, governors, mayors, senators, representatives, Cabinet secretaries, Vice Presidents, or leaders in the military.

Trump’s lack of experience has been evident throughout his term, particularly in the longest government shutdown in U.S. history and his low approval rating for his third year in comparison to previous presidents, according to Pew Research Center.

This shutdown, which started Dec. 22, 2018, occurred because of budget conflicts involving Trump’s plan to build border walls. During a shutdown, nonessential workers are furloughed, or placed on leave, and essential workers must work with no pay for the duration of the shutdown. Trump made an official announcement on Jan. 25th ending the shutdown. His whole speech can be found on the White House’s website.

According to David Bier, an immigrant policy analyst, the wall is estimated to be largely ineffective at preventing illegal immigration, and it will cost at least $5 billion. A majority of the land that would be used is privately owned, so the government would acquire the land through eminent domain, a controversial government policy where land is taken in exchange for compensation from the government. However, Trump hasn’t offered compensation. Native American tribes that own land along the border have also refused to allow a wall to be built.

Trump’s background as a celebrity businessman hasn’t prepared him for government work at all. Government workers are suffering without wages for a wall that many believe will not fix America’s issues. If celebrities continue to run for presidency and win, misguided leaders will make millions suffer for malinformed, ineffective policies.

Celebrities may claim to be politically aware, but their elevated economic status means they will have difficulty relating to their constituents, and will therefore make policies that will actually help them. Years of law making or military or other political experience are necessary to successfully run this country.

Granted, political or military experience do not always make great presidents, but a completely inexperienced individual poses a greater risk. Americans need a strong and capable leader in times of increasing foreign and domestic conflict. Celebrities are more than welcome to express their political views, but they are mistaking their social and cultural influence as political influence.