Teachers deserve to feel safe at their own place of work 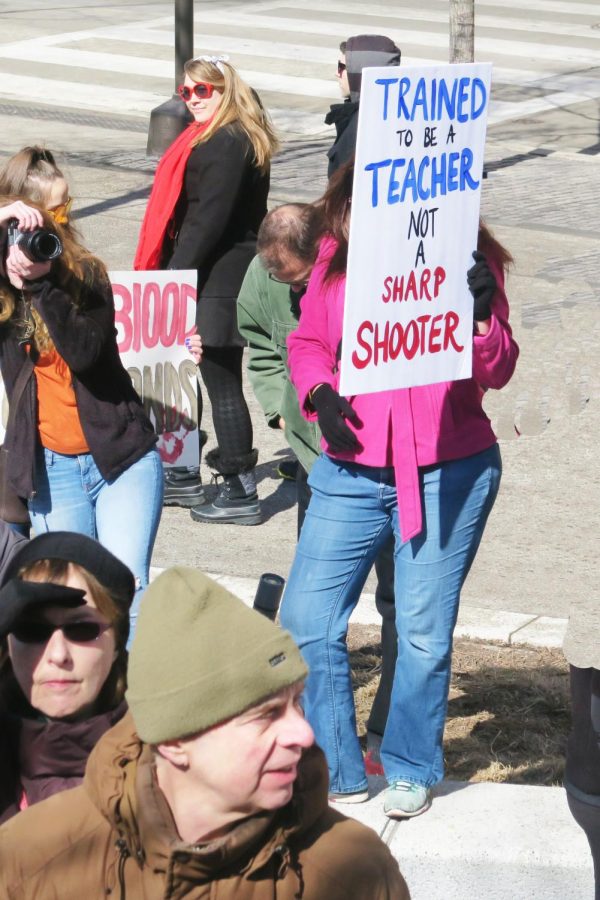 Teachers at a March 2018 protest hold up signs against the proposal of a law that mandates school teachers to be armed.

From an outsider’s perspective, teaching is an incredibly difficult career to love. On top of dealing with troublesome students, demanding curriculum and helicopter parents, teachers have to worry about their own safety at school. No teacher should feel unsafe at their place of work, but recent local events only heighten teachers’ fears of a work-related injury.

A video clip showing a Baltimore student punching her teacher in the face Nov. 8 amassed over 60,000 views—and its popularity has continued to grow. For weeks, the local community was fascinated by an altercation between a student and her teacher at Frederick Douglass High School. In the video, an angry student refuses to follow her teacher’s directions; instead, she punches her teacher in the face and slams the door on her way out of the classroom.

According to the user who posted the video, this incident occurred during the teacher’s first day back at school after having intensive cancer surgery. The incident is being investigated by Baltimore County Public Schools, but the student has not yet been charged with a suspension. There is no indication of her facing any major consequences for her actions, which means that she does not have any incentive to change her behavior.

However, the user who posted the video did admit that it is possible that the student is facing consequences, but Frederick Douglass High School is choosing to handle the case internally in order to preserve their self-image.

Sadly, this is not an isolated event. Teachers across the country are subject to student’s angry outbursts, and there is not much they can do to fight back. Still, the majority of students do not get in trouble for hurting teachers, and the cycle of violence continues.

According to the National Center for Educational Statistics, during the 2015 to 2016 school year, 79 percent of public schools recorded that one or more incidences of violence had taken place, amounting to 1.4 million crimes. Additionally, 10 percent of teachers reported being physically attacked by a student at their school. For students, the fear of being personally attacked at school is nowhere near as high as that for teachers.

According to the National Center for Educational Statistics, only three percent of students ages 12 to 18 reported that they were afraid of being personally attacked at school during the same school year. This is probably because most of the attacks are aimed at teachers, not students. Students do not see the need to increase safety in schools because they are not the target of most in-school violence.

Even so, the effects of student assaults on teachers can be long lasting, both emotionally and financially.

According to Education Week, a website focused on teacher advocacy, teachers can press charges against students who assault them. However, the process is so lengthy and emotionally draining that most teachers decide against it. And, the teachers who do press charges oftentimes do not have the support of their administrators.

It is critical that school districts like MCPS address teacher safety issues before they begin to loose high-quality teachers. In addition to providing students with harsher punishments for harming teachers, school districts should look into the effectiveness of these punishments and consider non-traditional punishments as alternatives to detention.