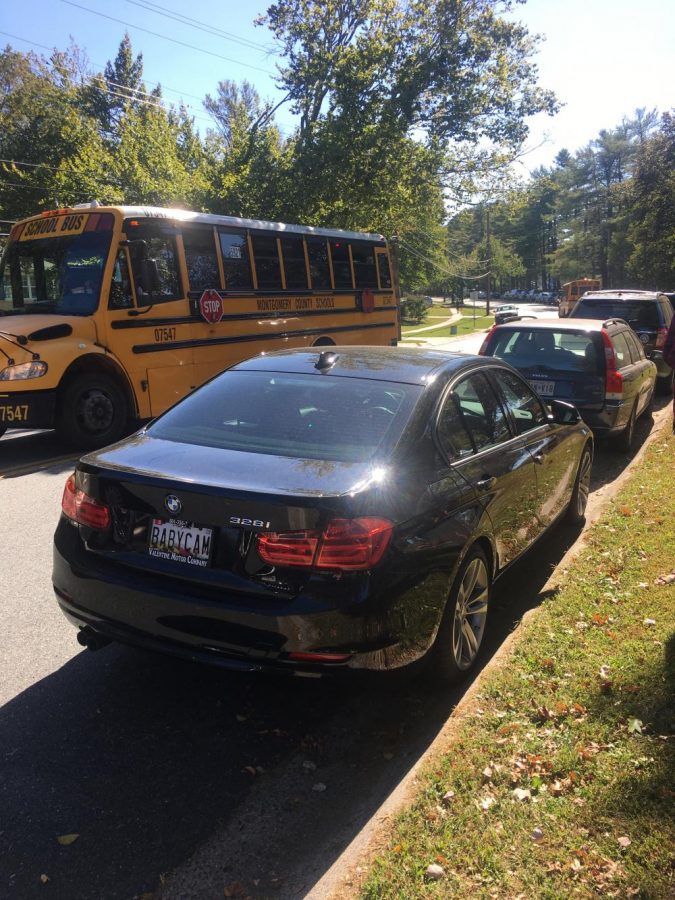 Junior Camie Kia's car parked on Gainsborough Road. She now parks there during the school day since she received a permit.

Every teenager knows, or at least envies, that, victorious tangible symbol of entering adulthood—a driver’s license.

Nothing seems better than to finally drive to and from school by your own will. However, for those juniors whose birthdays are early enough to get their licenses before the school year starts, unless they pay hundreds of dollars to park in a nearby driveway, or win and pay for a Booster Club spot, they have no place to legally park their cars around school. It’s not until late September and early October rolling around, that they are finally allowed to purchase a street permit.

Seniors, on the other hand, face different treatment. The unlucky ones who don’t win a spot in the parking lottery or don’t pay for a driveway or a booster club spot can obtain street permits at the tail end of summer, up through the first week of school. Seniors come first. Juniors fall behind.

This favoritism is unfair and can even be deemed a form of ageism. Junior drivers have just as much a need to drive to and from school as seniors do. Grade level does not inherently affect the need of students to drive to school.

According to junior Spencer Smith, since he cannot park on Tuckerman during the school day, he catches rides from friends who can drive and park at school.

It is highly inconvenient for juniors to have to wait until October to be able to drive to school. Juniors who take the bus cannot take it home from school on days that they must stay later for extracurricular activities. On top of that, if both of their parents work full time, then they may be stranded at school for hours after dismissal or the end of an after-school activity.

According to senior Mac Ballman, he obtained a permit to park on Tuckerman before the school year started. It was easy for him to get a pass this year unlike last year, when he, as a junior, got his license in the beginning of August but did not receive a parking pass until November.

This may be an issue that only pertains to a small portion of individuals, but it is still a prominent and bothersome one for many. There is validity to the argument that it may be fair for seniors to receive priority because they are at the top of the school and have waited their turn to be able to drive to school. So go ahead, give them that priority.

However, after the first week of school, any seniors who plan to park on the street, if they are organized and actually want to drive, will have already purchased the necessary permits to park on the street, since they could to do at the end of summer. Those who wait longer should lose their month-long priority as there are several juniors who are willing to pay for parking at the start of school, and thus, should not be forced to wait an entire month to do so.

Furthermore, the school only earns more money by allowing juniors to purchase street passes. Also, maybe more juniors would refrain from purchasing driveway spaces if the school didn’t make it so difficult to grant them alternative parking. Therefore, by preventing them from doing so, CHS is losing out on this.

The parking permit distribution is unfair to juniors. As many teenagers know, there are few better feelings than the one when you pass your drivers test, so, it is only just that students are allowed to practice this responsibility—regardless of grade level.