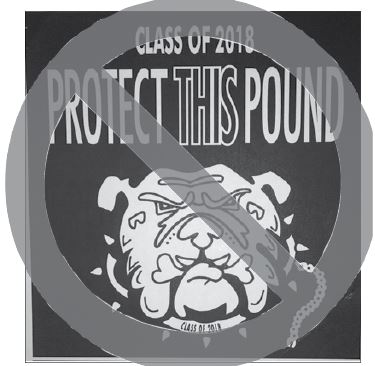 When the CHS freshman class exec board attempted to design class spirit-wear for Homecoming in October, a long process of multiple turn-downs from administration began and is still ongoing.

What should have been a simple task was not. Several slogans were discussed including one that used the word “fight” to root for a win in the Homecoming football game. Another student-drawn design included the words “Protect this Pound,” with a bulldog bearing a “Class of 2018” spiked collar. All of these options were rejected.

Though limitations on student expression in school do exist, they are minimal and need to be clearly communicated to class sponsors so the sponsors can do their jobs without needing to seek constant approval for tasks as simple as designing a class t-shirt.

According to Principal Joan Benz, the word “fight” was not allowed to be printed on the shirts because it promotes “negativism” and discourages sportsmanship. If the design is thought to “provoke violence,” it is turned down.

According to Student Press Law Center attorney advocate Adam Goldstein, when it comes to school-sponsored spirit wear, designs can be censored if they have illegal implications or disrupt the school environment.

A school sponsor is able to recognize these issues, so the extra step of going through an administrator just lengthens and confuses the process.

But common sense should play a bigger part in the decision to censor certain words rather than a strict adherence to laws that limit expression. Just because something could be censored doesn’t mean it should be.

Putting the word “fight” on a t-shirt is highly unlikely to cause a real fight to break out.
According to Goldstein, the school cannot ban the word fight because they “can ban the actual fights but they can’t ban the idea of fights.
However, if administration wants to approve apparel designs before they are sold, there should be one clear administrator assigned to the task who knows the legal guidelines and then applies them using his or her common sense, as opposed to multiple people and a confusing jumble of individual views.
Really, there’s a simple solution—class sponsors should be given control of the approval process.
Because class sponsors are actually teachers, they are around students all day long. They become familiar with the current lingo and therefore are in the best position to recognize any hidden meanings behind designs.
According to Benz, students have “all these underground meaning of things,” so administration stays away from any designs that have the possibility of an inappropriate meaning.

Although administration’s precaution is understandable, sponsors who are around these “underground meanings” constantly would be in a better position to decipher them.

According to Goldstein, administration tends to misinterpret sayings and ban innocent words or designs because they are not close to the community of students.

A teacher makes judgment calls everyday, from deciding whether a student’s paper deserves an A or a B to what lesson plan will best prepare students for a test, so making tough calls is part of a teacher’s job. The same skill would naturally be applied to the job of a class sponsor.

Class sponsors should be able to make decisions on behalf of their class, as they are assigned the task of guiding them and making sure the student voice is heard, whether it be on a piece of clothing or in their speech.