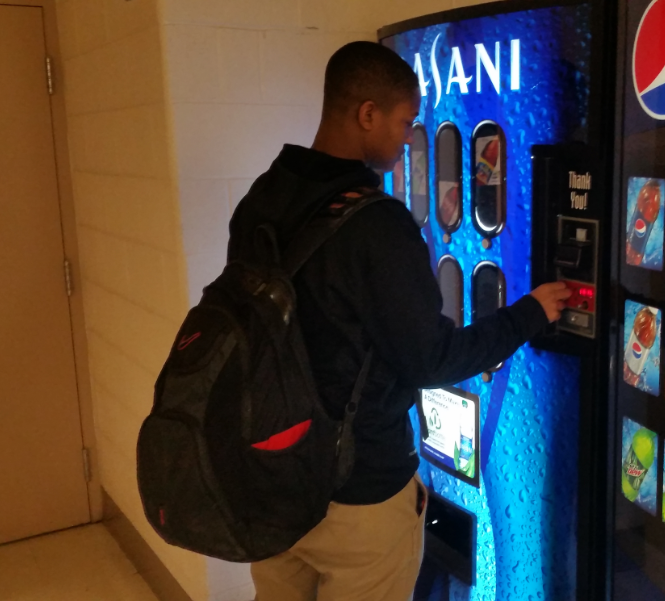 Buying products from vending machines is banned during school hours and only available before and after school.

Students often have sudden cravings during the school day for a nice, tasty snack or a cold, refreshing drink. Imagine students’ surprise when they discover that their favorite snacks and drinks are inaccessible until after school.

Vending machines are essential appliances within every high school, serving as a food source for any person willing to pay a small amount. It makes sense to let students satiate their appetites and quench their thirst whenever they choose. However, when MCPS limited the access of certain machines to after school in 2006, they affected students who need the quick energy found in snacks and beverages in the machines.

Countless students come to school exhausted from having slept late the previous night, craving a source of energy that can help them stay alert throughout the day. These students often turn to the caffeine in soda as a quick, effective method of revitalizing themselves. However, by limiting some vending machines, MCPS prevents these students from being able function for the remainder of the school day.

According to Caffeine Informer, a website detailing facts and statistics about the stimulant, the effects of the average caffeinated drink last anywhere between four to six hours, or the length of a school day.

In addition, limiting vending machines affects low-income students who come to school hungry. Although MCPS makes accommodations for these students with its reduced meal plan for lunch, the machines also serve as a source of food and drink for them. The average cost of a single snack is 75 cents, which can be added to a 40 cent reduced-cost lunch. This total price of reduced lunch and one snack is still less than half the price of a $2.80 regular lunch. Thus, vending machines are beneficial to low-income students, providing them with a source of inexpensive sustenance.

According to No Kid Hungry, a campaign to reduce student hunger, of the 21 million low income students who eat lunch at school, only half eat a breakfast. Thus, getting sustenance in school is all the more important for such students.

With all the snack or drink options made available to students in vending machines, it is counterintuitive to limit students’ preferred choices. Students should be allowed access to all of the snacks or drinks that they desire, not just one or two of each. It is aggravating to students to not be able to use the one vending machine out of the school’s 11 since it is only open after school.

According to MCPS Director of Food and Nutrition Services Marla Caplon, food and beverages available for sale to students between midnight and 30 minutes after the school day must meet guidelines for student health that are provided by USDA, MSDE as well as the MCPS Wellness Regulations. If the product does not meet these guidelines, then it cannot be available for sale.

One might argue that the negative impact on health by the caffeine in soda outweighs the positives that result from its stimulating effect. However, studies have shown that low doses of caffeine increase mental alertness and decrease fatigue without causing serious side effects.