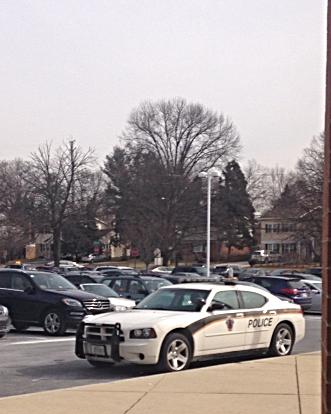 Snow days caused a delay in the promise of increased police presence to enforce traffic laws.

CHS has recently instituted stricter enforcement for the traffic rules and regulations around the school, including a new electronic sign outside the school aimed at improving the safety of students.

According to Principal Joan Benz, what was once a school issue regarding unsafe behaviors around the school will now fall under the jurisdiction of the police.

While there are undeniably many things wrong with the school traffic during the start and end of the day, these new measures are only attacking a symptom, rather than finding a cure.

According to a Jan. 24 email assistant principal John Taylor sent out to all students and parents, CHS does not allow parents to drop off students anywhere other than the carpool line on Victory Lane, a policy police will be enforcing. Also, all cars must make sure to stop for pedestrian crossings, and new crosswalks will be created.

The whole root of the problem is the carpool line. It not only acts as the channel for a steady stream of parents dropping off their children, it is also the entrance to the senior parking lot. The high volume of cars in such a small space results in immediate disaster. As a result, parents look for other places to drop off their students.

Perhaps if the carpool line was moved or a new one was created, there would not be as many problems with unsafe student crossings and drop-offs. Putting a crossing guard in the carpool line to direct student drivers through one lane and parents through another could also help to alleviate the crowding. CHS can continue to target the areas at which students are illegally dropped off, but once one area has been eliminated, a new one is created. Parents would rather find creative new places for their child to jump out than sit through the mindless honking and traffic jam that is the CHS carpool line.

Also, while the addition of new crosswalks will be beneficial, it is just encouraging students to get dropped off near those crosswalks rather than use the carpool line. Ultimately, CHS needs to decide whether it is targeting the students’ unsafe crossings or the parents’ illegal drop-offs. If the safety of the students is the priority, then maybe more areas should be opened up for safe drop-offs.

According to Benz, the carpool line “is what it is,” and students should incorporate it into their morning routine, just as D.C. area business workers account for traffic when planning their morning commute.

However, many of the students who are driven to school do not plan on being driven. Some students get driven because they overslept, missed the bus, or could not walk with the weather. These students should not be forced to be late for school just because their morning did not go as planned. Also, students should not need to lose valuable sleep just to make it through the school carpool line.

The way it is now, a student who follows the rules is in jeopardy of being late for class, whereas the students who break the rules have plenty of time to spare. CHS needs to realize that adding law enforcement officials, whose time could be better spent elsewhere, is only making life more difficult for the students. It is not making anything any better.