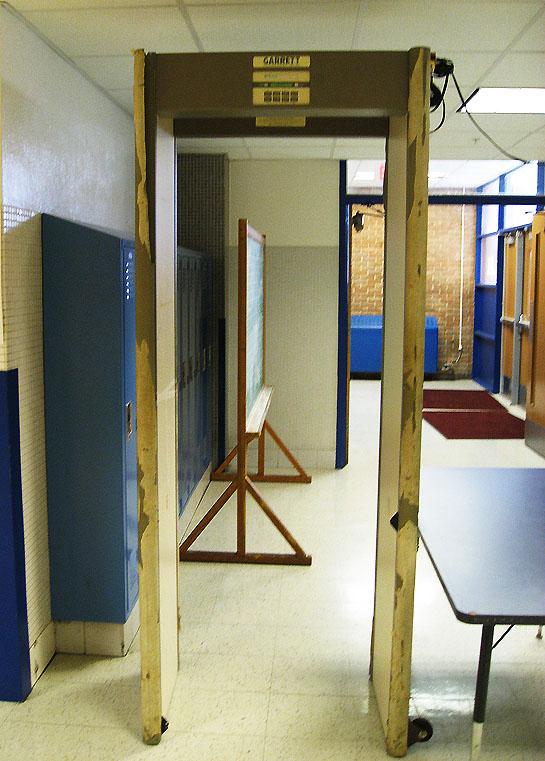 How many students at CHS would expect to hear a gunshot in the cafeteria?  How many would expect a violent and potentially fatal event to happen on their first day of school?

The students at Perry Hall High School in Baltimore County certainly were not expecting it, and CHS students would not either.  But there are ways we can prevent possible weapon violence now, before it happens again.

According to a study from The National Center for Education Statistics, 7.7 percent of all public schools have experienced a student threat of physical attack with a weapon.  With these statistics in mind, metal detectors are necessary to protect our school from possible weapon violence.

Most schools in areas like Montgomery County do not have metal detectors and do not acknowledge the possibility of weapon violence.  Although school shootings and violence can happen anywhere, the majority of United States schools do not use metal detectors on a daily basis.  CHS needs to take precautions to maintain school safety by acquiring and using these devices.

The recent shooting incident in Baltimore is just one example of gun use in unexpected places.  On Aug. 27, 17-year-old student Daniel Borowy was shot on the first day of school at Perry Hall High School in Baltimore County.  Borowy, who is currently in critical condition, is recovering from his third surgery.

According to an Aug. 27 Huffington Post article, the shooter walked into the school cafeteria around 10:45 a.m. and fired two shots while being wrestled down by teachers.

CHS should use these instances as a wake-up call to review our own security.  Metal detectors are one major change that CHS can make to provide a safe environment for each student, staff member and administrator.  It is the school’s responsibility to protect everyone in the school.  Each student has the right to feel completely safe at school and not fear that there are weapons in the building.

Unfortunately, security will come at no small cost: schools may struggle to amass the roughly $33,000 needed to install metal detectors, but there is no price too great for preventing a potential shooting.  Also, after setting up an $80,000 scoreboard in the football stadium, CHS has confirmed that we do have additional money to spend.  If CHS is unwilling to splurge for the metal detectors, either the state of Maryland or MCPS should cover their cost, because they are essential for school safety.

According to assistant principal John Taylor, CHS has not had any issues that demonstrate a need for metal detectors, and thus has not considered using them.  He also said that metal detectors are not worth intruding on everyone’s personal rights of privacy.

However, MCPS has already begun to implement new capital improvements plan that will upgrade the physical security at all schools, including new camera systems and visitor management systems.  This plan will be enacted over a span of six years, totaling at around $9 million.

According to Douglas Steel, supervisor of the MCPS Department of School Safety and Security, MCPS will receive all funding from the county council.  This funding will go toward upgrading the analog camera systems to digital camera systems in all schools.  Wootton High School has already converted to this new digital system, and CHS will be receiving new cameras over the summer, along with a large increase in the number of cameras.

We can increase the safety and security of our school to prevent possible incidents like the shooting at Perry Hall.  If CHS is committed to creating a safe learning environment, metal detectors are essential.  They are the only tools that can guarantee a gun-free school day, something each student has the right to expect.