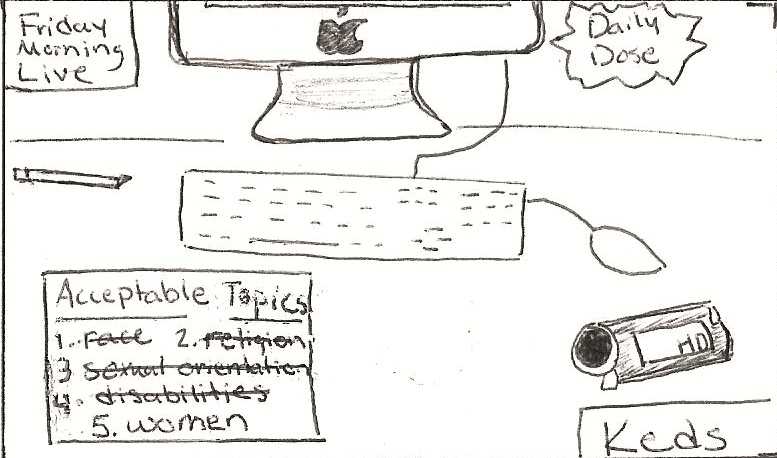 If the Daily Dose were to play this segment during Friday Morning Live, it is likely that chaos would ensue. It is almost possible to hear the criticism: the angry phone calls from parents, the allegations against the Daily Dose for being racist and the murmurs of discontent from students of all colors. This is how the school would most likely react if the joke were made towards any minority. So why then, when the joke was made toward women, did most people sit back and laugh?

The Daily Dose went too far and should issue an apology to all women at CHS.

In the segment that aired last month, a male member of the show interviewed 15 girls and asked them to sign a petition against the 19th Amendment, which granted women “suffrage.” He added, “Women have suffered for too long.” The video seems to show that all of the girls he approached signed the petition.

Suffrage, of course, means the right to vote and has nothing to do with suffering. The 19th Amendment to the Constitution gave women the right to vote, so the last thing any girl would want is to sign a petition repealing it. What the segment did was reprehensible. By playing a word game, it preyed on girls’ insecurities for the sake of getting a laugh, which is deceitful and just plain wrong.

The prank amplified a harmful stereotype. According to a Jan. 22 Newsweek article, studies by researcher Adrian Furnham show that men and women are equally intelligent, but women see themselves as less intelligent than they really are while men perceive themselves as smarter.

When the male reporter laughed and seemed superior, the female interviewees looked helpless and foolish.

This problem could have been easily solved. If both male and female students were interviewed, the gender issue would not have been relevant. Instead of making women look stupid, the segment would have shed light on the need for students to educate themselves about their Constitutional rights. The important point would be made without targeting any group, making the segment an equal-opportunity offender. And, yes, it would but funny, but not at the expense of any one gender.

According to media services technician Scott Selman, the video was not meant to target women. They interviewed women simply for the comedic effect of females being unaware of the name of one of their most important rights. It was meant as an eye-opener and not as an attack on women.

The fact that it was all female interviewees, however, only masked the main point of the video. It would have been humorous if male students were included in the joke. After all, is it not an equally important right for males?

Women have fought a long and hard battle to be seen as equal to men. In a world where male radio announcers demean women publically and women make still make 77 cents to every male dollar, even the smallest joke can perpetrate the idea that women are inferior. CHS cannot afford to jump on this bandwagon.