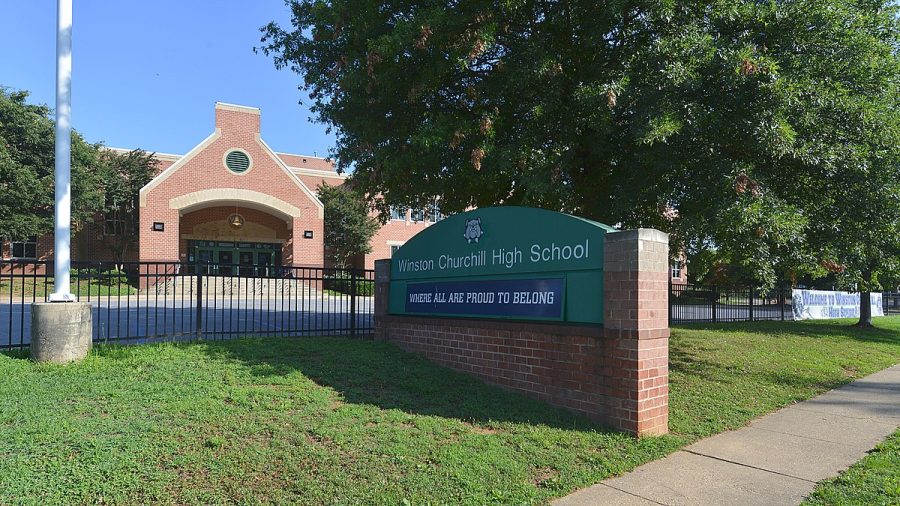 Winston Churchill High School is one of many schools that have faced violent threats recently. Luckily, it was investigated and students safely attended school.

Bomb and shooting threats are unfortunate realities for students going to school in today’s world. Like most schools, WCHS has had multiple perceived threats such as one in December 2021 and as recently as this weekend. On Saturday, May 28, violent threats  were made that specifically targeted certain WCHS students through social media posts and stories. These posts included threats of bringing a bomb and a gun to school and aiming at those who made the user’s life terrible.

These threats came just a few days after the shooting of Robb Elementary School in Uvalde, Texas, increasing the uneasy feeling for stuents of going back to school. In Uvalde, on May 24, an 18 year old killed 19 students and two teachers. In response to this, people across the country are calling out the government for stricter gun control laws. Since the shooting in Uvalde, the United States has had at least 20 mass shootings. The frequent gun violence and easy access to assault rifles causes anxiety and nerves within the United States and within school communities.

“Due to the rise in recent school shootings, these threats have more of an impact on me especially because it makes an experience that I would never think could happen more of a reality,” WCHS junior Lily Kriendler said.

On Sunday, May 29, Principal John Taylor sent out an email to WCHS parents regarding the threats. He reassured the community that the Montgomery County Police Department had been contacted and worked to make sure schools were safe upon return on Tuesday. The email conveyed the seriousness of the situation and an investigation was started.

“The recent tragedy in Texas is an unfortunate reminder of how seriously we must take school safety,” Principal Taylor, in his email, said. “That is why our staff and administration work closely with both the MPD and the MCPS Office of Safety and Security to practice, prepare, and train to ensure the ongoing safety of our students and staff.”

With this communication, the police saying “there is no credible threat” and the statement of increased security presence would be at school, many students feel as comfortable returning to school as they normally would.

“It’s sad but the threat doesn’t even faze me anymore because of how frequently this happens at our school and the schools around us.”  WCHS junior Brandon Gerber said. “It is not ok but is painfully common in society and does not make me as nervous, especially since the school was informed and is investigating.”

But, even with the acknowledgment by the principal and the involvement of the police department, some students were still fearful to return to school on Tuesday, May 31.

“I stayed home because even though an email was sent out, my parents and I felt that it was pretty vague and it didn’t exactly give them a sense of comfort,” WCHS junior Allison Coleman said. “I’d rather stay home than go to school and feel unsafe being there.”

While Tuesday, May 31 ended up just like any other day where students go from class to class, do work, and hang out with friends, many students were missing from classes.

“School should be a place where students can learn and feel safe,” Kreindler said. “The crazy amount of violent threats and shootings that have occurred recently is very alarming and something needs to change. Elementary, middle and high school students should not be scared to come to school.”

After a thorough investigation of the incident it was found out that the account that posted the threat was a user being bullied. The threat was an attmept to get the user in trouble and bring public disgrace to him. In this instance there luckily was no credible threat ever made or attempt at harming WCHS students, but nonetheless it demonstrates the omnipresent fear for students that a threat could arise at any time and the source behind it may not be obvious.