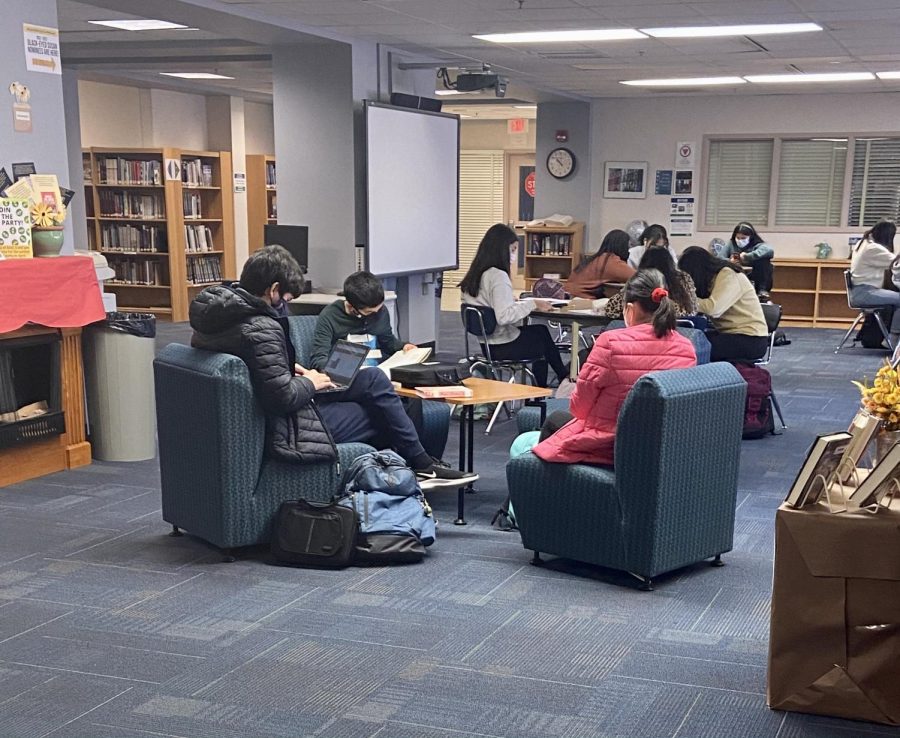 On Dec. 1, many students spent the Bulldog Pride Choice period in the Media Center. The Media Center was a top choice for students who wanted to complete homework, read or have quiet study time.

Every Wednesday, since the beginning of the school year, students have reported to their advisory classrooms between fourth period and lunch for a 30-minute lesson. With lessons covering topics such as managing stress and test-taking strategies, this should have been the perfect addition for students. However, these periods had begun to draw ire and boredom from teachers and students alike—causing the WCHS administration to rethink what Bulldog Pride should be.

The proposed solution to these problems is Bulldog Choice: students now can choose where and how they want to spend their advisory period—as opposed to reporting to the same room every time. The idea, which was announced to students at the beginning of the second quarter, had been in the works for many months by the administration before it was officially implemented because WCHS was solely following county-issued lessons.

“Over the summer, we had a workgroup as part of the leadership team that met to discuss plans for the upcoming 2021-22 school year,” Principal Taylor said. “We talked about what an advisory period would look like and how we could use it to best meet the different needs of students. That committee then came up with the idea of offering students the choice of what they wanted to participate in during the advisory period instead of just normal [county-issued] lessons.”

Bulldog Choice gives students the freedom to choose between multiple activities, such as study hall, hangout room, teacher office hours or club meetings. With Bulldog Choice, students can use the period to make it the most effective for them.

“I think students really appreciate the freedom aspect of Bulldog Choice as not everything is directed by adults,” Taylor said, “From the feedback we’ve gotten, students have said they liked going to the various activities which were offered.”

Bulldog Choice was also implemented to give students a chance to unwind instead of having to sit through an advisory lesson. Bulldog Choice gives students a wide variety of options so they can participate in what they feel most comfortable doing.

“With Bulldog Choice we really wanted to give students the opportunity to have a mental health break, and with that allowing students to use the time to do activities they want to do,” Taylor said. “Whether those are fun activities such as meeting with a club or an affinity group to getting help from a teacher, the main goal of Bulldog Choice is to fit the needs of all students at WCHS.”

In order for students to figure out which room they want to attend for the Bulldog Choice period on Wednesday, an email with the list of activities is sent out to students the Sunday before by Principal Taylor. The new choice aspect heavily relies on teachers’ input, as they are the ones whose rooms are used to accommodate around 2,000 students at WCHS for the 30-minute period.

“The Thursday or Friday before Bulldog Choice, staff put in what they want to do on the following Wednesday,” Taylor said. “From that, we can work with the input from staff and ultimately create the Bulldog Choice schedule for students.”

As teachers chose what activities they wanted to have in their rooms for Bulldog Choice, questions arose about how the period would go. Unlike Bulldog Pride, which has a set group of students based on homeroom, teachers did not know how many students would show up during Bulldog Choice. This led to the realization that if too many students came into one room, it would make the class challenging to control.

“I had about 65 kids in my room for the [first] Bulldog Choice period,” English teacher Alison Deli, who hosted the Bulldog Choice hangout room, said. “Eventually, I had to start turning some students away as the room was getting too crowded, but overall the period was successful.”

Despite a mostly successful first Bulldog Choice period on Nov. 17, some students decided not to comply with the directions given on what they needed to do after fourth period. Since attendance is not taken during Bulldog Choice, teachers and the administration do not know where each student will be. Some students took advantage of this and did not report to any class, instead hiding in bathrooms, wandering the halls or leaving the property and taking an extended lunch.

“I’d say over 90 percent of students were compliant with Bulldog Choice and found a place to go during the period. However, there were definitely some kids who didn’t choose to follow the directions that were given,” Deli said. “I feel like once Bulldog Choice becomes a habit, students will adhere to the routine, and we’ll see everyone finding a room to go to. With a whole list of places to choose from, I think students will start to appreciate the choices better, and as time goes on there will be less of an issue with students not going to a room.”

Another factor that may have led to students not residing in a class during Bulldog Choice is that finding a room can be stressful. Since there are around 100 classrooms to choose from, students can quickly become overwhelmed and not know what room would best fit their needs.

“I think for some students—especially those who aren’t acclimated to WCHS yet—it can be overwhelming to figure out where to go. With advisory, students already know what room to go to, and there’s no second thought about what they should be doing,” said Deli. “I think as teachers and peers it’s important for us to reach out to those students who aren’t super comfortable and make sure they feel like there’s a place for them, whatever room that may be.”

As there have only been a handful of Bulldog Choice periods this school year, finalizing whether or not this should become a permanent fix to the schedule is too early to decide, but Taylor is optimistic that the new change will be beneficial for WCHS.

“We’ve been committed to doing Bulldog Choice through the second marking period, and then revisiting it when the quarter ends,” Taylor said. “For the time being, Bulldog Choice appears to be successful thus far and I’m looking forward to seeing how students continue to enjoy the new program.”