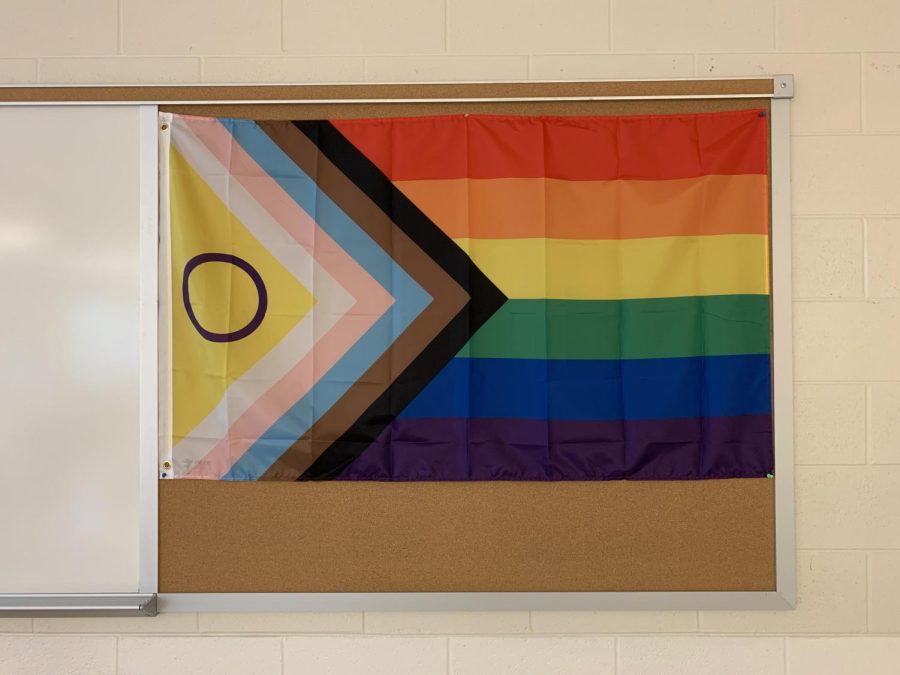 The LGBTQ+ Studies course, established for the first time in the 2021-2022 school year at WCHS, explores the identities, issues and history around the LGBTQ+ community. This elective is a hopeful sign that more diverse classes will continue to be developed and implemented.

Shakespeare, Hemingway, Steinbeck and Hawthorne. What do these four have in common? They are examples of the predominantly white male authors that have traditionally been overrepresented in school curriculums. However, in recent years, the call for more diverse representation has swelled, and schools have begun to take notice. In Montgomery County and at WCHS in particular, the administration and teachers have worked tirelessly to ensure that all students feel seen.

Beginning this school year, LGBTQ+ Studies is being offered as a social studies department elective. As the first course that has been designed by teachers and students together in MCPS, and one of the first in the nation to cover gay, lesbian, bisexual and transgender history and culture, the creation of this class is a historic moment.

“This class is very affirming of student identities that have been marginalized in American society for a long time,” Kevin Oberdorfer, the LGBTQ+ Studies teacher at WCHS, said. “This course gives students the opportunity to look into those processes and issues involved.”

The course has four units, covering factors that shape identity, the role of the community in U.S. history, LGBTQ+ cultural contributions in the context of their representation in media and the contemporary challenges they face respectively. The focus of the curriculum was allowing students to both relate to the content and explore new perspectives on issues. Student input has been the major pushing factor behind every step of the curriculum development.

“[Four approved teachers and Tiferet Ani, the Social Studies Content Specialist] met with a wide pool of students, many of whom were active in MOCO Pride [a student-led organization that lobbies for LGBTQ+ rights within MCPS] and many of whom had been active in lobbying for the approval of the course,” Oberdorfer said.

In addition to special elective courses, an often overlooked aspect of curriculum diversity is English class. There has been a distinct lack of representation in its content. This has begun to change, with the book options for the 2021-2022 school year being more diverse.

“We tried to pick a wide variety of books so that no matter how you saw yourself, you could hopefully find a book that sparked something in you,” Alison Deli, an English teacher at WCHS, said. “Maybe you are Asian, and you read a book about an Asian family; maybe you love science, and you could read ‘The Immortal Life of Henrietta Lacks’; maybe you are an immigrant, and you could pick up ‘The Book of Unknown Americans’.”

This year, teachers are encouraging students to read books that may be out of their comfort zone. Books that reflect the students, as well as those that offer perspectives they may not have been exposed to before, have been shown to be crucial to their emotional and intellectual growth.

“If you pick up a book about a culture, gender, or sexuality that does not represent you, you get the chance to look into someone’s head and understand what they are going through,” Deli said.

The process for approving books to be taught in high school English classes in MCPS is long, with the Evaluation and Selection committees reviewing any additions to the county’s approved list. At WCHS, the English 10 curriculum for the current school year has titles from many backgrounds, with African-American, East Asian, South Asian and Hispanic authors being represented. However, this progress does not mean that there is not room for improvement.

“MCPS has approved many more diverse books in recent years, but it is not enough,” Deli said. “We are lacking quite a bit especially in books that represent the LGBTQ+ community; we have a few, but not nearly enough.”

The question of what can be done to help students feel more accepted in school is one that has no clear answer. It will vary from classroom to classroom, from course to course. Going beyond the diversity in the content itself, the way in which it is introduced and discussions are facilitated is vital as well.

“I think that teachers have to make a choice to really create materials and an environment that reflects and echoes the students that are in their class,” Oberdorfer said. “It requires a genuine decision that somehow the teacher will try to reflect the members of the class and the school.”

Regardless of the many obstacles that remain in the fight to improve curriculum diversity, the environment at WCHS is one that bodes well for more representation in the future. The implementation of the LGBTQ+ Studies class and the widening pool of book choices for English signals the beginning of a steady stream of improvement in student representation.

“I feel that Mr. Taylor and the current administration is definitely trying to send the message that we want all students to feel represented,” Deli said. “I hope it gets clearer to students that we want, as teachers and as a whole school, for everyone to feel safe and seen.”