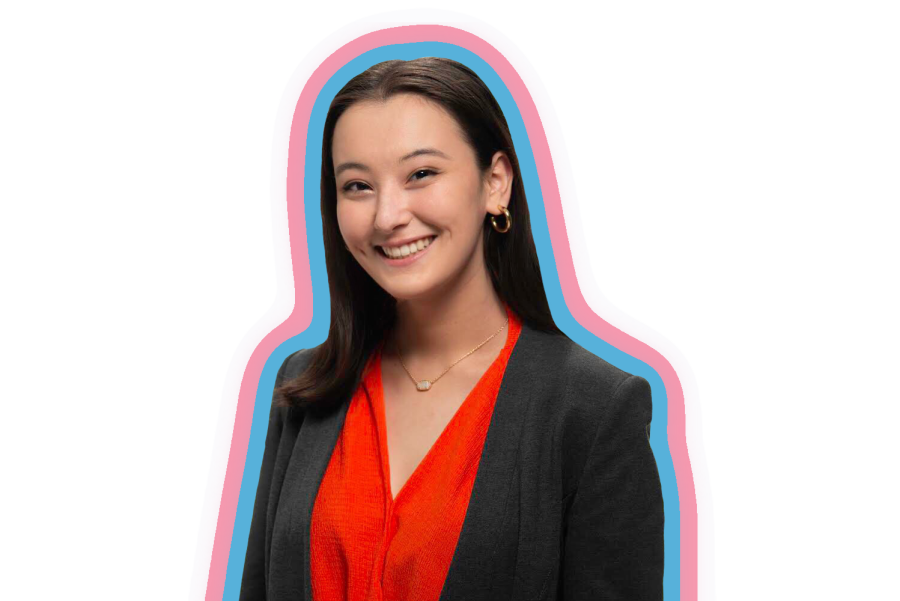 Hana O'Looney, the current MCPS SMOB, smiles in a campaign photo. Throughout the entirety of her campaign, O'Looney was active on multiple social media platforms to ensure that she was engaging with as many MCPS students as possible.

Passionate, engaged and committed – these three words only begin to sum up current MCPS Student Member of the Board (SMOB), Hana O’Looney. From advocating for equity in the school system on the countywide student government to running a highly successful SMOB campaign during last year’s virtual school year, O’Looney is creating a positive change in MCPS.

O’Looney, a senior at Richard Montgomery High School, was first inspired to get involved with advocacy and student government when she was constantly moving schools due to her participation in the magnet program.

“The disparities that I saw in different schools in the same county were immense,” O’Looney said. “One school that had a lower free and reduced meals rate (FARMS) had a really active PTA, all of these after-school events and extracurriculars, and the students were really engaged. I saw the complete opposite at another school with a high FARMS rate. That really stood out to me as something that shouldn’t have been happening within the same school system.”

After spending her sophomore and junior years of high school advocating for free menstrual products for students to the School Board and the Maryland General Assembly, O’Looney decided to run for SMOB at the end of her junior year, focusing her platform around equity and closing the opportunity gap.

“Your academic success should not be able to be predicted by the school that you attend, your race, your language, or any other part of your identity,” O’Looney said. “This issue will not be able to be fixed in a single term, but I hope to be able to make incremental changes.”

In terms of what she is focusing on accomplishing this year (2021-2022) on the board, one of her main goals is to improve financial literacy for high school students to ensure that they are graduating with the proper knowledge and skills to successfully manage student loans, taxes, a mortgage, and other financial aspects of their lives that are not traditionally focused on in schools.

“I hear so often from students that what we learn in school isn’t relevant to their lives, and that’s something I really want to work on because learning how to manage your finances is something that will without a doubt be relevant to every single student in MCPS,” O’Looney said.

Since being elected SMOB, O’Looney has had to juggle her senior year of high school, college applications, board work and simply being a teenager. As a result, O’Looney has chosen to reduce her schedule and participate in no other extracurriculars this year so that she can focus on her role as SMOB. In the past, O’Looney participated in debate, theater, and many other activities.

“When I took this job, I made a promise to myself that it would be my number one priority,” O’Looney said. “I think I really owe it to all 160,000 MCPS students to give everything I have to this position to focus on making the changes that I set out to do. This year I’m prioritizing board work and school visits so that I can talk to students and hear their input, concerns, and ideas.”

On Friday, Oct. 24, O’Looney visited WCHS during lunch to meet and talk with students. Some of the main concerns from students were follow-ups from previous SMOBs about things that were promised and never delivered, such as having better Wi-Fi in schools. O’Looney was able to hear these concerns and answer questions during her visit.

“Hana was so open and friendly,” WCHS junior Danielle Faerberg said. “She came over to where we were eating lunch and struck up a conversation. You could tell she really cared about our concerns and what we had to say.”

While being SMOB comes with many challenges, most of the obstacles O’Looney has faced came during the process of running her campaign last spring.

“You put so much of yourself out there when you run for this position,” O’Looney said. “Everything is out for the public to see and to criticize, and that takes a huge emotional toll out of you.”

Despite this challenge, O’Looney believes that anyone can and should pursue the role of SMOB.

“Two words: Do it. We have a woefully low number of people running for SMOB each year,”   O’Looney said. “Even if it interests you a little bit, there are only two requirements to run: that you are a student in 10th or 11th grade and that you live in Montgomery County. You should be willing to make some sacrifices, but don’t discount yourself. Just go for it!”

O’Looney loves her job and everything that comes with it. From board meetings, to committee meetings, to visiting schools, she appreciates every second of the opportunity she has been given.

“My favorite part of the job has definitely been talking to students,” O’Looney said. “In particular, girls and gender minorities have come up to me and said I inspire them, and that’s something I never thought would happen.”