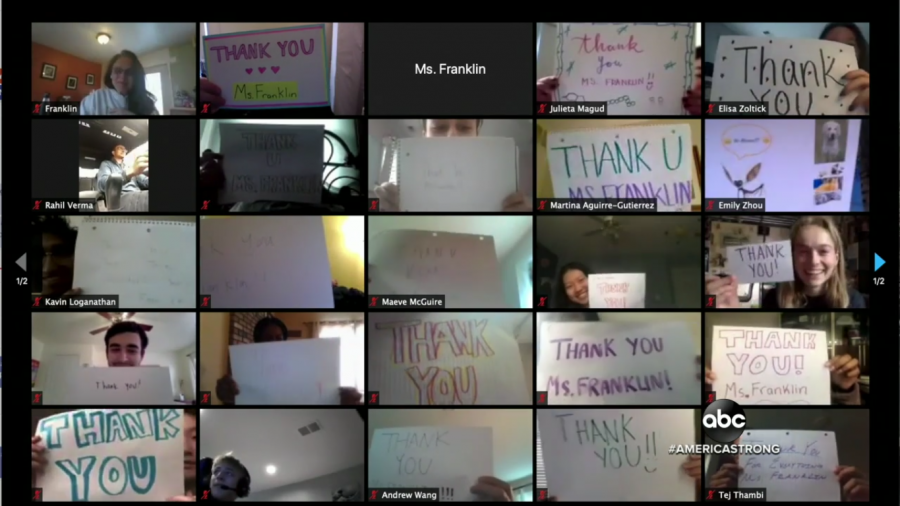 When students surprised AP Biology teacher Wendy Franklin on their last day, she was overwhelmed with emotion. Their kind act eventually made it to "ABC World News Tonight with David Muir."

“ABC World News Tonight with David Muir” is watched by an average of 9.6 million viewers on any given night. That is now how many people know the name Wendy Franklin. The AP and Honors Biology teacher appeared on the evening newscast on April 14, alongside some of her first semester AP Bio students, to discuss the special way her students thanked her.

“It was so very amazing and obviously brought tears to my eyes,” Franklin said. “It has been an amazingly challenging year and my students and I rallied together in that first semester to really connect with each other and our course content.  It is something I will cherish always.”

Her students appreciated Franklin’s effort and dedication throughout the semester. She was always willing to help her students in their academic and personal endeavors, spending her free time getting to know them better.

“We wanted to do the thank you cards for Ms. Franklin because she has been such a supportive teacher throughout the course of the semester,” junior Elisa Zoltick said. “She is one of the most amazing people and teachers- she would oftentimes stay an hour after class helping students with assignments and materials. She made us feel so welcome, which is difficult especially in an online environment.”

On the second to last day of the semester, her students asked Franklin to put herself in a breakout room. With the surprisee gone, the suprisers discussed their plans — the first time they could do so as a class because not everyone had a social media account.

“What we ended up doing was asking Ms. Franklin to put herself in a breakout room during our second to last class,” Zoltick said. “We then told the class our plan and hoped that everyone would enact it for our last class. Everything worked out perfectly, and Ms. Franklin’s reaction was more than we could ever ask for.”

With the surprise ready, sophomore Amanda Kossoff decided to take a recording of the event. She then edited it during class, all while completing work.

“It occurred to me that Ms. Franklin will probably want to watch the surprise over and over in the future, so I decided to record my screen during the surprise last minute,” Kossoff said. “I ended the recording, and since it was the last class of the semester, and I would soon switch teachers, I realized I needed to edit it QUICK! So, I decided to edit the video, add music, text, backgrounds, etc to make a polished surprise video for Ms. Franklin before the end of class.”

Kossoff sent the finished video to @goodnews_movement, an Instagram account focusing on spreading positivity. The account posted the video, which got hundreds of thousands of views, and students assume this is how ABC News found out about it.

“Before we knew it, the video unexpectedly went viral on platforms like Instagram and Tik Tok, and was even posted on a good news account with over 2.3 million followers,” Kossoff said. “From there, the press reached out to us wanting to schedule interviews, including CBS, Fox, and ABC. They wanted to hear about why we executed this surprise and our advice for students around the country. We obviously could have never predicted it would get this attention, it was really just a genuine way of expressing our appreciation.”

“ABC World News Tonight” eventually found the video and decided to reach out to Franklin and some of her former students. The students who were interviewed in the video — Kossoff, Zoltick and junior Juli Magud — were notified hours before the broadcast was set to air. They filmed at lunch, sent it to the producers and waited for the 6:30 p.m. show to begin. But 50 minutes before the start, they ran into a problem.

“At around 5:40pm on Wednesday, we all got a text from the producer asking us to re-film to say “hi David.” We didn’t panic, but all rushed to re-film,” Zoltick said. “I’d say I probably filmed my little interview over 30 times, because I just couldn’t record a segment I liked. This whole process definitely took more time than I expected. It is a little ironic because we all recorded very detailed responses, but they ended up using like 5 seconds of our video.”

After going through the headlines of the day, Muir opened the “American Strong” segment — where the video aired — with “we are grateful to our teachers in this pandemic and the students are too.”

“Seeing myself and my classmates on ABC World News Tonight was such an exciting experience,” Kossoff said. “It is hard to comprehend that around 10 million people saw the video, but my favorite part was getting lots of texts, calls, and emails afterwards from people I actually knew who saw me on the news and were excited as well. It was awesome!”

Franklin received a lot of praise, too from former students, members of her family and coworkers who saw her on the news.

“It was pretty cool to watch the broadcast, my entire family was watching along and were so supportive and excited.  My own children seemed less impressed,” Franklin said. “I did hear from several former students and coworkers who passed along their congratulations, the entire experience was humbling and so moving. I may have teared up again watching it.”

The students had many takeaways from the experience — making sure to show appreciation for those that inspire them, something Zoltick says that she takes away and how making a segment on TV works. But the biggest takeaway: kindness goes a long way.

“It was CRAZY,” Zoltick said. “We didn’t do the gesture for recognition, nor did we expect such a positive response from it- we simply wanted to thank our teacher.”