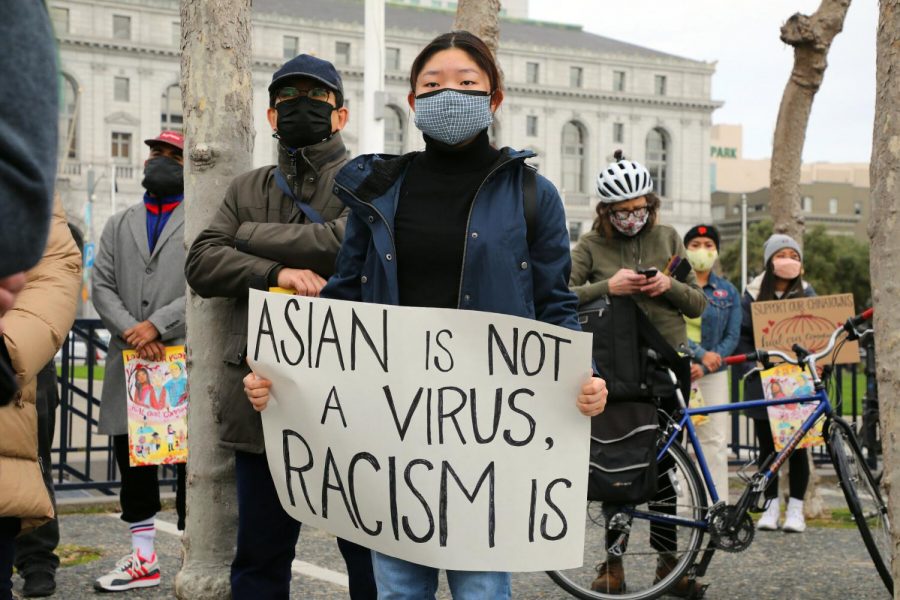 With anti-Asian violence on the rise, groups have come together and protested the recent injustices. This particular compaign was for Vicha Ratanapakdee who died after being violently slammed into on his morning walk.

Bullying, subconscious biases or just plain ignorance? These lines often get blurry when the topic of race gets mentioned in Potomac. With the Asian population making up the second-largest demographic at WCHS, diversity is definitely present. However, recent occurrences have highlighted the historical and ongoing instances of racism happening even within multiracial communities.

The latest incident at WCHS involved three sophomores creating a collective TikTok account, which was brought to the attention of administration on March 2. The social media account clearly targeted Asian individuals. The students chose “chinatownbat2” as their username, and in their video comments referred to the pandemic as a “panda express”- associating the global crisis with the American Chinese fast food restaurant chain. Their profile picture also mockingly depicted one of the involved student’s housekeepers, who is of Asian descent, aiming to create a “comedic” effect.

“I find it extremely disrespectful and disgusting, and they were old enough to know not to do those things,” WCHS sophomore Kaylen Chang said. “The posts mocked COVID precautions. I understand COVID impacts people differently, however, my mom has cancer and hasn’t been out for months. This past year has been miserable for her for fear of COVID when going in and out of the hospital, and with an added layer of anti-Asian hate crimes on the rise, life is even less enjoyable.”

The news of the incidents spread rapidly after screenshotted proof of the account was posted on one person’s Instagram story. Students began posting it on their own accounts to raise awareness of what was going on. Some even went the extra mile and emailed the administration, advocating for the girls to face a consequence for their actions. WCHS sophomore Summer Suliman was one of many individuals who contacted the school.

“I believe that people, or in this particular situation, students, should be held accountable for their actions. Whether or not they feel any remorse for what they did does not matter because ultimately their actions have hurt people,” Suliman said. “I know how often incidents similar to this one have occurred in school settings and as a student myself who has experienced such things, I’m also aware of how frequently they go overlooked. I sent that email to the administration because I wanted to advocate for the POC [People of Color] at WCHS and move towards promoting a safer and more-aware school environment.”

Although discouraging to see at school, the scenario is unfortunately not far off from what can be observed outside of the WCHS community. Out of the students surveyed by the @wchsobserver Instagram, 86 percent reported that they have seen a rise in anti-Asian violence since the pandemic started in March of 2020. Asian hate crimes have increased so much that part of the reason why Asian American families are not sending their children back to school is fear of dealing with racism.

According to The Washington Post, many Asian and Asian American families are staying virtual at disproportionately high rates, citing racist harassment amongst other reasons to keep their kids at home. When asked if this real-world news rang true in her case, Chang expressed how she was concerned, but not surprised.

“I am worried about it [racism] in general, a lot more now, but I am less worried about violence and more about verbal abuse,” Chang said. “With the racism I have experienced, it is always backhanded like whispers or mean remarks. Kids are afraid of the virus and now they are able to [incorrectly] pin it on Asians. I’m annoyed that there are those who post black squares and are “activists” when it works for themselves and their own reputation, then make fun of groups when it’s a joke to them; it makes school a worse place. Xenophobia and racism has been amplified with our pandemic, but it is not a new thing.”

The Asian American Alliance Club is a group which seeks to promote Asian culture in the WCHS community. This is important for empowering Asian Americans in society, and building greater understanding and solidarity within the Asian American community and with other ethnicities as well. Hsinyu Ho, the club’s teacher sponsor, expressed that non-Asian individuals have a responsibility to step up when injustice is seen in order for change to happen.

“My message for the non-Asian students is to speak up against racism,” Ho said. “To become anti-racist means listening to the concerns of other races, and wanting to make a change. If an individual does not think racism affects them, they already feel comfortable and will not stand up. It is important for people who do not experience racism to empathize with the people who do, so they can also be a part of making a change.”

When a community comes together to voice their concerns about a topic, it can ultimately lead to its getting acknowledged. This is why WCHS junior Elizabeth Qiu also believes that speaking up about a situation makes a difference.

“It is unproductive to use Asians as scapegoats-or [any] race as a scapegoat for the world’s problems,” Qiu said. “It is really important for people to stick up for each other because racism should never be tolerated. We still have a long way to go in addressing these situations, but I think the staff takes things like this very seriously. The best way to ever bring an issue to the table is definitely to speak up about it.”

Racism has always existed in this country, and inside the WCHS community. It is a significant and sensitive topic, yet one that needs to be addressed in order for advancements to be made. Standing up for those being discriminated against will always be appreciated as another step towards fostering a more welcoming community.

As far as individual acts of racism at WCHS are concerned, staying up-to-date on current events, educating yourself and raising awareness are ways students can help prevent instances of racism from occurring again. There has been no announcement in regards to whether the sophomores received any punishment for their discriminatory behavior.

“If people are taught from a young age that their inappropriate and racist actions won’t be met with consequences, then when will the hurting ever stop and when will the learning begin?” Suliman said. “If children or teens are led to believe that speaking out is wrong, how can we ever hope to educate or solve the root of our past and future problems?”