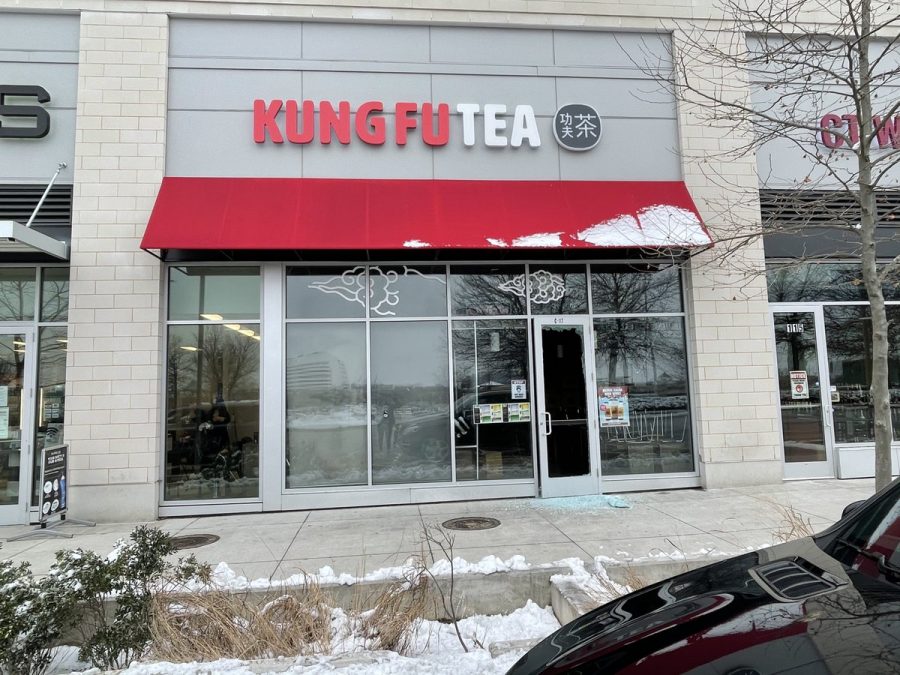 Broken glass scatters on the ground outside of the Kung Fu Tea store in Columbia, Md. that was burglarized early morning on Feb. 12th, 2021, the day of Lunar New Year. Hate crimes against Asian Americans have increased due to the COVID-19 pandemic.

On Feb. 12, three Asian-owned restaurants at Columbia Mall in Howard County were looted and vandalized. This was heartbreaking for the Asian community since it occurred during the Lunar New Year, a holiday many Asians around the world celebrate.

“We are deeply saddened that during these difficult times our community is filled with such hatred and division,” the Kung Fu Tea store in Columbia, Md. that was vandalized said in a post on Instagram. “As an Asian American establishment, the fact that these attacks came on Lunar New Year, such a celebrated time of year for us, is heartbreaking.”

This is the latest in a series of hate crimes targeted towards Asian Americans that are unfolding not only in Maryland but also across the country. Many are unfairly blaming Asians for the COVID-19 pandemic, making them a target of discrimination and violence. However, there has been no evidence to determine this claim’s validity.

The story of a 91-year old Asian man who was seen on surveillance violently pushed to the ground at the Chinatown in Oakland, Calif. on Jan. 31, 2020 has gone viral. In a press statement released by the Stop AAPI (Asian American Pacific Islander) Hate organization on Feb. 9, 2020, the organization received over 2,808 accounts of anti-Asian hate from 47 states and D.C. from March to December of last year.

Kung Fu Tea was not the only store that was vandalized at Columbia Mall. Bonchon and Urban Hot Pot, restaurants most WCHS students enjoy, were also looted.

“I was shocked [at what happened to Kung Fu Tea] not only because of my love for boba but also because I didn’t think people would be that bold in their hate crimes against the Asian community,” WCHS freshman Ben Wu said. “In a country where freedom is considered a basic right, this should not be happening.”

For the vast Asian community at WCHS, these attacks have hit close to home and students are taking action in many forms. For freshman Jessie Lin, the Class of 2024 SGA President, social media is an important way of taking action.

“Asians have been trapped in this model minority stereotype and there are individuals who think we have everything going well for us. But in reality, we have all experienced hate and it’s not getting better for us.” Lin said. “As an individual, I do my job by informing my friends about what’s going on using my social media like posting information on my Instagram story or contacting people through WeChat regarding Asian hate crimes and encouraging them to pass them on.”

These hate crimes have not only negatively impacted Asians, who believe they are being attacked due to their race, but are also increasing beliefs that Asians were the root cause of the pandemic, sparking more violence and prejudice towards the Asian community.

Even though teenagers are doing their best to advocate, it isn’t enough. Wu and Lin both agree that there needs to be more support against Asian hate crimes to actually make a change for the better.

“Aspects of life are being taken away and individuals can’t leave their houses to take walks, buy groceries, or maybe get COVID tests because of these hate crimes,” Lin said. “It’s great to see that social media is standing up for hate crime. However, what about the rest of America?”

For Wu, to create real change, awareness cannot just be through social media. There are other methods of recognition to spread recognition of Asian hate crimes.

However, with many other racial justice movements currently in our society such as the Black Lives Matter movement, Asian hate crimes have not been getting the same attention needed to spark reform.

Overall, the biggest takeaway is that although the WCHS community is working to make a difference, it cannot be done without support from others. The stores vandalized at Columbia Mall have set up a GoFundMe page striving to “raise awareness for hate crimes against Asian Americans.” As of Feb. 22, they have raised over $7,000 to the Stop AAPI Hate organization.

“It’s our duty to speak up about what’s happening and what needs to be heard and spread awareness,” Lin said. “Ideally, I hope for a decline in xenophobia and racial hatred [because] our Asian community is just like any other community.”