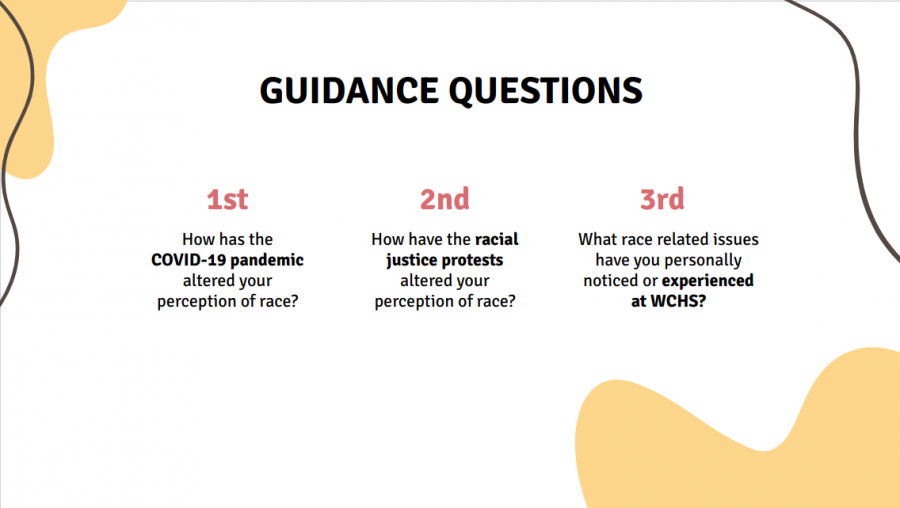 The three guidance questions that students discussed during the first day of the virtual study circle. The questions allowed students the opportunity to discuss current events, including COVID-19 and the protests about race in America.

Scheduled at the beginning of B-days for WCHS students, advisory periods have been filled with various lesson plans including note-taking, self-advocacy and mental health. However, none have encouraged as much growth and change as the lessons that Ambassadors led on Nov. 17 and Nov. 20.

The WCHS Ambassadors, with help from the student-led Restorative Justice and Student Coalition, led a Study Circle with students allowing them to examine their differences and how race-relations factor into their everyday lives.

“I had been trained to facilitate Study Circles, but our plans were complicated due to the COVID-19 pandemic,” junior Queen Balina, the co-founder and co-president of the coalition, said. “We decided to take advantage of the time at home to draft and pilot a Virtual Study Circle program. Our goal is to develop a restorative justice mindset in our community and teach stakeholders to have uncomfortable conversations.”

The coalition’s other co-founders and co-presidents, seniors Trevor Gardemal and Bailey Herman, wanted to give students the opportunity to learn in a safe environment. They reached out to WCHS administrators to see if they could make an advisory program out of it.

“In the past, we have done Study Circles with small groups,” Marie Gasaway, an assistant principal and the leader of the WCHS Ambassadors, said. “Both the administrative team and RJSC thought it would be best if all students could participate in the important discussions.”

While the Study Circles with smaller groups were effective, the administrative team wanted more students to participate. This meant broadening the scale to advisory periods for all students.

“Feedback from students these last couple of years has shown that our student body wants more avenues in which to talk about race, racism, equity and social justice,” Gasaway said. “We needed a group of students to lead these discussions if we were to hold these discussions with our 2,300+ student body. We have around 180 Ambassadors and they were chosen to lead.”

The study circle took place over two days. The first day was centered on a discussion about current events, like COVID-19 and race-relations, while the second day focused on a video in which elementary school students shared stereotypes. After the video, students had to come up with stereotypes about their communities before discussing their personal truths.

Junior Andrew Glassman, a WCHS Ambassador who led a study circle, noticed there was less participation from his classmates than he expected.

“Students got an opportunity to express their opinions on national events,” Glassman said. “Less people participated in the conversation compared to a teacher because I was one of their peers.”

Juniors and seniors participated in the two-day session in November. Sophomores and freshmen will have the same opportunity on Dec. 1 and Dec. 4. Although some saw a lack of excitement in the student body, many students learned about themselves and their peers during the session.

“It was definitely a new experience, considering we’ve never done these types of discussions,” junior Fatemeh Naghavinia said. “The discussion was awfully quiet though; I think this was because of the virtual environment.”

Naghavinia was also particularly interested in what her classmates had to say during the stereotype activity on the second day.

“It was interesting to note how more people were willing to share their own truth, rather than the stereotypes,” Naghavinia said. “A lot of the time we talk about minorities being stereotyped, but it’s important to note that society creates a stereotype for everyone. It’s our responsibility to realize that no one will fit into these stereotypes.”

The coalition has been planning and developing study circles since before the COVID-19 pandemic. They held their first in the summer for students and staff and received positive results before hosting one for WCHS Ambassadors in October.

“The RJSC has been around since 2019, and we’ve been planning our circles for much of that time,” Balina said. “The idea happened before America’s racial reckoning this summer, but this is not to say that current events have not affected our club. The attention on race likely made students more accepting of our message, and we incorporated discussions on current events.”

There were some worries about student participation going into the event. Since students may not turn on their cameras, low levels of engagement were possible. This led to the decision of students, not teachers, leading the discussion.

“We were hoping student led advisories would produce more discussion during advisories since everyone would be talking amongst peers,” Gasaway said. “School is a place to empower students, provide opportunities for them to lea and also be a support system for students to learn and grow if they fail.”

Over the summer, Gasaway read posts from the Minorities at Churchill Instagram, an eye-opening experience for her that led to a major takeaway. The account posted anonymous submissions about race and equity from WCHS students and their experiences.

“A lot of students felt they didn’t have anyone to go to or they didn’t think someone would listen to them if they spoke up,” Gasaway said. “My hope is that by talking about these issues and creating safe spaces for students, all students will feel like they have someone to go to and feel confident that if they stand up against racism, they will be supported.”

Gasaway believes the study circles will strengthen the community by importantly allowing student voices to be heard and empowering them to speak out about issues they find concerning.

“Sometimes we only talk about race in response to something that has happened,” Gasaway said. “It is imperative to have these conversations on an on-going basis because racism and systemic racism isn’t going to be fixed in a day, year, or decade. It will take a lot of people, a lot of time to undo.”

Balina is glad WCHS students learned in the program and hopes they will use what they learned in the future. The coalition looks to continue discussions about injustices and create change.

“If student participants take away one thing from their experience, I hope that it’s an understanding of the importance of their experiences and the power they hold within their community,” Balina said.