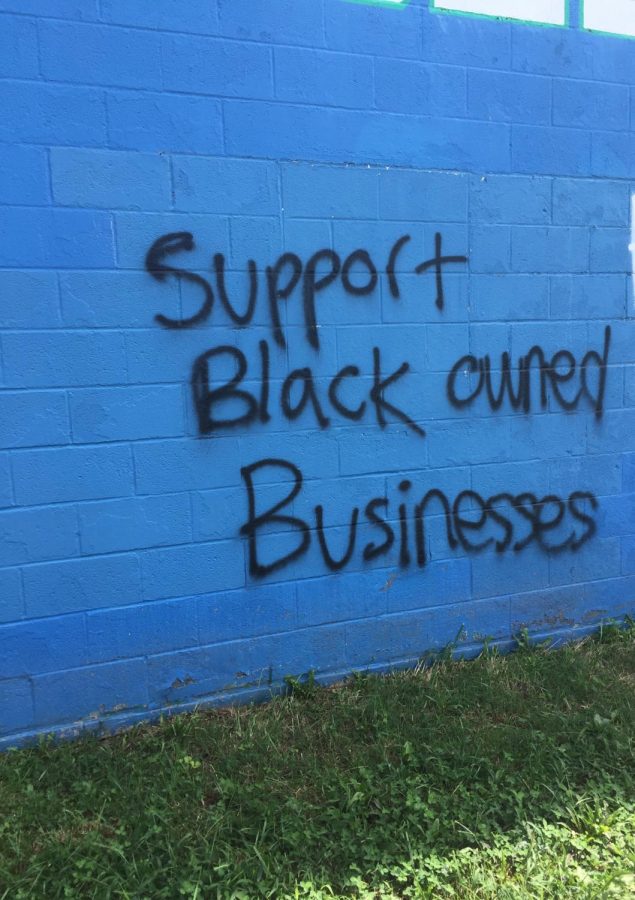 "Support Black owned bussinesses" was spray-painted on a building at the track at Winston Churchill High School in Potomac, MD on Septmeber 5, 2020.

Multiple graffiti drawings on the WCHS track rocked the community when it was reported on Sept. 5, becoming the second incident at the track in only a few days. The graffiti included topics  referencing the fall sports season being moved online and the drama going on between Jada Smith and her husband Will Smith, and was reported to the Montgomery County Police Department, who handled the incident.

There is still an ongoing investigation into the person or people that vandalized the school. Graffiti on the track is not new however, with the last incident occurring in 2017.

“Officers responded to the report of a vandalism at the high school,” Sgt. Rebecca Innocenti of the Montgomery County Police Department said. “It is believed that the vandalism occurred sometime during the overnight hours of September 4 into the 5th. Officers found that a person(s) had used spray paint to write words on the press box and concession stand in the football stadium.”

“We are saddened that someone would choose to vandalize our school property,” Brandice Heckert, WCHS principal wrote in an email to the community on Sept. 5. In her email, she announced that she would close the track until the graffiti was cleaned up.

“The track only remained closed for cleanup,” Heckert said. “It was open to the public as soon as it was removed.  I do not believe in punishing others for the actions of a few.  So the track has remained open as long as we have staff on site.”

There were more than half a dozen different instances of graffiti on the track and its surrounding facilities. Heckert’s name was included in the vandalism.

“I was not insulted, but was extremely upset and disappointed that someone would vandalize our property,” Heckert said. “When vandalism occurs, it requires unnecessary work for other people to clean.  Many of the statements were hurtful and disrespectful.  That is not the environment our community and our school strives to create.”

If the suspect or suspects are caught, they could face malicious destruction of property, the formal term for vandalism, according to Innocenti. This misdemeanor crime can result in jail time or a fine, depending on the damage, which MCPS’ Department of Maintenance cleaned up.

This was the second major incident at the track in a span of a few days. On Aug. 30, a white man yelled at a black man for stopping in a lane, in an incident some called racist. WCHS security is now monitoring the track to make sure there is not another issue. While the school has cameras monitoring the stadium, the police department has not requested the video footage.

“SRO Homrock and myself and another security team member monitor the grounds every day throughout the school week,” Terry Bell, WCHS security team leader said. “After hours are monitored by video cameras that are strategically positioned outside to capture school property.”

Even though this incident negatively impacted the track, the community has come together to help.

“I also very much appreciate the community involvement,” Heckert said. “Community members have reached out to me when there have been incidents on our property.  We are a school nestled in a neighborhood, and I want to continue to provide these facilities for our neighborhood friends.”