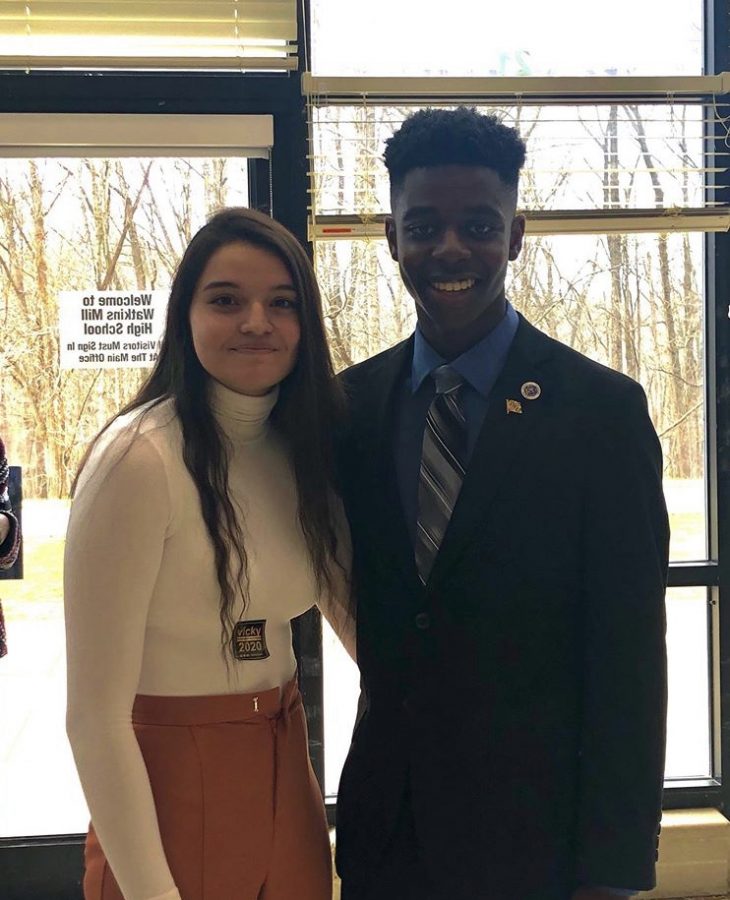 The final two candidates Vicky Kidder (left) and Nick Asante (right) pose after hearing their nomination for the SMOB general election. The pair are the final two who students will vote on for the position.

On Feb. 12, delegates from schools around the county went to the annual nominating convention for the 43rd Student Member of the Board (SMOB) position. Held at Watkins Mill Elementary School, the convention decided the final two candidates in the SMOB race. The SMOB position allows a Montgomery County student to represent their peers as one out of eight votes on the MCPS board of education.

“I really like the idea of a student representative because it allows students to actually make decisions and influence the school board which otherwise students don’t have any input in,” junior Luke Calhoun, a delegate from WCHS, said.

Students campaigned for SMOB for about two months prior to the convention. Campaigns included student outreach as well as the formalities of candidate approval and presentation set-up. Students looked to everything from school visits to social media to help give them an edge in the campaign and subsequent convention.

“Everyone seemed excited to be at the convention because we were all playing a role in selecting the future SMOB,” senior Grace Carnathan, a delegate from WCHS, said. “The candidates seemed confident and prepared for their speeches. Overall, the atmosphere was professional and organized.”

The event started at 10 a.m. with brief ceremonial and introductory matters, and soon after candidates launched into their opening appeal speeches to the delegates. For some candidates, the opening speeches were the only exposure they got as only the top six candidates could move on to the afternoon.

“The SMOB candidates had four minutes to introduce themselves and explain why they’re the best fit for SMOB,” Carnathan said. “We voted for our top three choices, and the six candidates with the most votes continued to the next round. I thought the candidates’ speeches were powerful and captured the attention of everyone in the auditorium. They seemed extremely prepared.”

Delegates then had a chance to break and reevaluate their choices. Meanwhile, candidates prepped for their last round of examination before the final vote which would determine which two of them entered the general election.

“The six nominees left had another chance to talk to the delegates and answer various questions,” Carnathan said. “After the question and answer portion, the delegates voted again for their top three candidates.”

At about 12 a.m. the delegates cast their ballots to narrow the six down to a final two.

“We cast a vote for our first, second, and third preference so if there was a tie, we would have gone to the second preference,” Carnathan said.

After submitting their ballots around noon delegates went to lunch to wait for the announcement of the finalists. As the results got closer to being announced, the crowd began to gather in anticipation around the Student Election Coordinators who were to announce them. The crowd erupted with a mixture of disappointment and excitement when the two names were finally revealed.

At the end of the day, the SMOB delegates selected juniors Nick Asante, from Richard Montgomery High School, and Vicky Kidder, from Magruder High School. WCHS’s very own Jay Wood barely missed the cut coming in a tight 3rd place.

“Nick and Vicky both energized the crowd with their speeches, and students were cheering the entire time,” Carnathan said. “Both are talented and qualified for this role, and they had a long list of experience proving their abilities. I think both have an equal shot at winning the general election. They’re both qualified and experienced, so either one would be great as SMOB.”

Students now wait until the “Meet the Candidates”  video that serves as the introduction of the candidates and their views to most students. Then, on April 22nd, middle and high school students will vote for whoever they think can best serve their interests on the county board.

“Having a SMOB is great because it provides a student representative for 165,000 students across the county,” Carnathan said. “The SMOB is an extremely important role because they vote on matters that affect students.”