Plunge into the campaign for two ply toilet paper 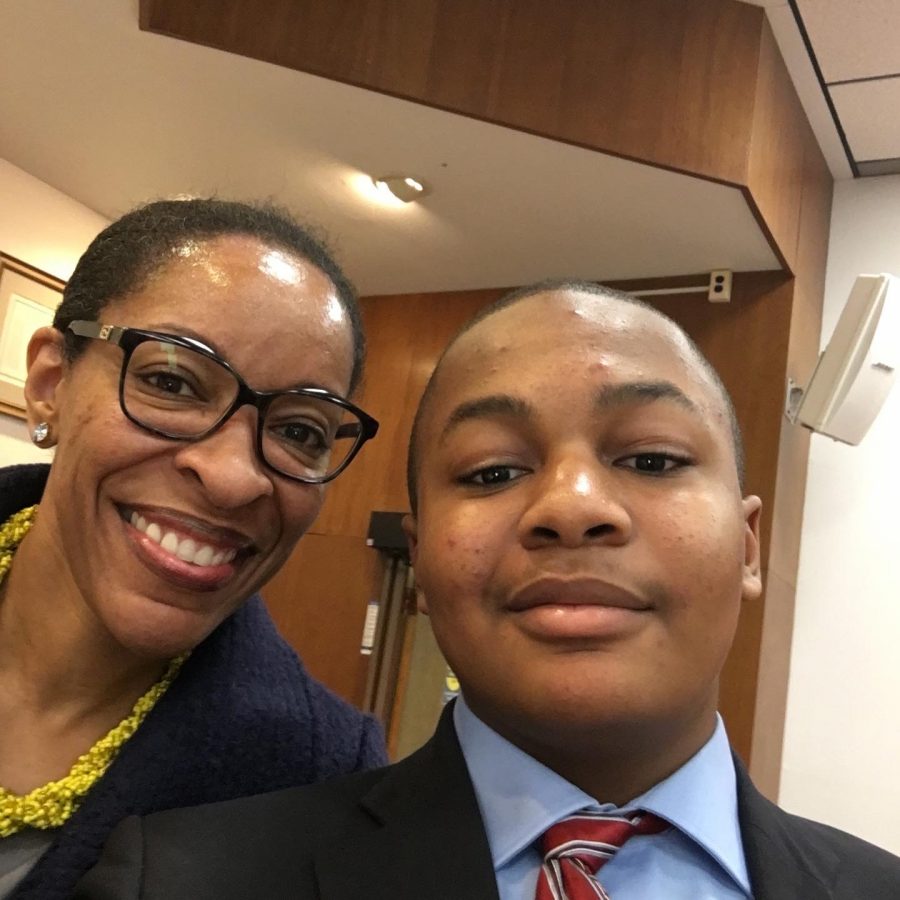 Cabin John Middle School President, Sekayi Fraser, poses with the Montgomery County Board President when he testified for the use of 2 ply toilet paper to the Board of Education.

With the MCPS operating budget being $2.8 billion, many would think that replacing the current one ply toilet paper in schools with two ply would not affect the county’s finances. However, this has proven to be a difficult task, as the transition to two ply would cost the county an additional $31,150 to make the upgrade in all MCPS schools. Cabin John Middle School student, Sekayi Fraser, took on this issue during a public hearing on Jan. 13 where he advocated for two ply toilet paper to be factored into the operating budget.

After countless complaints from his classmates about the toilet paper’s low quality, Fraser decided to make two ply toilet paper his platform during the election for student body president at CJMS. His campaign secured him a victory and he became the school’s newest president.

“It was enough of a concern to be taken seriously but silly enough to make my campaign stand out,” Fraser said.

In order to get his voice heard, Fraser testified during a public hearing on the school system’s proposed $2.8 billion budget, where he urged the board of education to upgrade from one ply to two ply toilet paper in school restrooms. The board has yet to come to a final decision about the budget.

Using his platform of student body president, Fraser decided he would not sit back and allow students to continue complaining about the quality of the toilet paper. Instead, he wanted to take action and keep his promise to work towards bringing two ply toilet paper to MCPS. Fraser realized he had to be persistent and that he would have to present his case to legislators and those who are involved in making budget decisions in MCPS.

“I used my platform to bring the issue to the higher ups at CJMS,” Fraser said. “Overall, I called out as many people as possible so that at least one would have to listen.”

Although there has yet to be any countywide changes in toilet paper, Fraser’s campaign caught the attention of local business owner, Scott Attman, who owns a Maryland based company called “Acme Paper & Supply.” Attman and his company donated 80 rolls of premium two ply toilet paper to CJMS to show his support for the cause.

Besides CJMS, Fraser’s campaign has sparked interest in other MCPS schools as well. WCHS student body president, Jay Wood, can relate to some of these issues as he has pushed for different budget considerations in school restrooms as well.

“I’ve been a supporter of feminine hygiene products in all MCPS bathrooms as well as urinal dividers,” Wood said. “I have also been involved in student groups, like countywide SGA, that has been advocating for two ply toilet paper.”

Since his toilet paper campaign, Fraser has received a lot of attention, not only from fellow students, but from various news outlets as well. On Jan. 15, ABC7 WJLA News published an article about Fraser’s push for two ply toilet paper and even featured him on ABC7 News, where he was interviewed on the topic.

“He did raise some important issues, and I know we’ve had adults complain about our toilet paper in our restrooms that is single ply and not very soft,” Board Member Patricia O’Neill said, in the ABC7 article.

Junior SGA president Maeve Mcguire is also in agreement with Fraser about the benefits of two ply toilet paper in our schools.

“I think we should have two ply toilet paper because it is more comfortable and the toilet paper we use right now definitely wastes more paper,” Mcguire said.

Both Mcguire and Wood agree that it is important to focus on issues that might seem less significant at WCHS. Although upgrading to two ply toilet paper may seem like too small of an issue for the school SGA to focus their attention on, sometimes these smaller issues are what make the biggest difference to students.

“I think the smaller issues, like toilet paper, are just as important as the larger ones because they affect the everyday lives of students,” Wood said.

In terms of financial decisions, it can be difficult for students to make change because most decisions are made by the SGA sponsors.  However, student SGA members are responsible for raising money for their class through school dances and other various events.

“The junior SGA has managed to raise money through two fundraisers, homecoming and glow, which helped to get our grade’s finances back on track,” McGuire said.

Following his toilet paper campaign, Fraser learned the importance of advocating for various issues and not being afraid to take issues to legislators if necessary. He recommends that other school SGA members take action when there is something that needs to be improved, as complaining will not make a change.

“Make sure to practice persistence,” Fraser said. “Every time you are denied take it to the next level.”