Redistricting meeting opens eyes to both sides of the debate 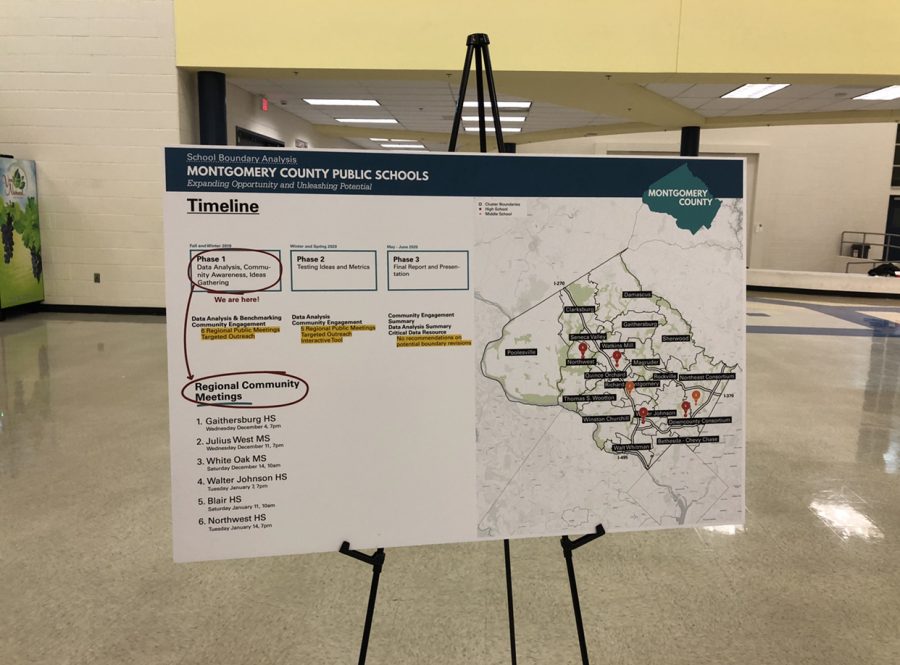 At the meeting, there were seven posters that explained different facts about MCPS districts and the timeline that was going to be followed. This poster explained the different phases as well as showed the other future meetings for audience members.

A current prominent issue in Montgomery County is school redistricting and how it will be implemented. Montgomery County has decided that students will be bussed to various schools throughout the county; however, they have supplied no information as to what bussing will be like, causing outrage amongst the community. Parents, students and community members in general have started to take very distinguished stances on the topic, with most in support of redistricting but against bussing.

There are endless reasons that show that bussing is a bad idea, including costs of bussing, the effect on the housing markets, the social, mental and physical effects on students and student safety. The main argument for redistricting is equality of education, however there are other alternatives to redistricting that could also promote equality of education, that do not require students to be bussed to schools farther than needed.

Bussing is an inadequate solution because of a few reasons including safety. On Jan. 8, in Carroll County, two public school buses collided resulting in three students going to the hospital. If MCPS buses were to drive longer routes to take students from one side of the county to another, it greatly increases the chances of something like the Carroll County incident happening again.

According to the Center for Disease Control and Prevention, in 2017, 2,364 teens aged 16-19 were killed and around 300,000 were sent to the hospital due to injuries from a motor vehicle crash. This translates to six teens dying each day and hundreds being injured because of crashes. By having students on buses for longer amounts of time or having to drive themselves, going greater distances, they are being put at a greater risk of an accident and injury.

Furthermore, bussing and redistricting will have negative effects on the housing market. Many parents choose to live in certain areas due to the neighborhood school district, the ability for their student to walk to school and the relative distance from caretakers to the school. Because of these choices, the housing market has increased in places that are in high demand due to location based on schools.

As students are taken from their homes down the street from their high school and bussed all the way across the county, the value of their houses greatly decrease because they no longer provide some of their previous important benefits.

Many students have caretakers, like grandparents, who may not be able to drive, or stay-at-home parents who walk to and from the school with their children and who are available in case there is an emergency or they are needed at the school throughout the day. If students are being bussed across the county and the caretakers can no longer be available for their student if they are needed, it causes a major problem.

Another main concern is the physical, social and mental effect bussing will have on students.

Socially, the idea of taking a student who has formed various friendships within their neighborhood and classroom and putting them in an entirely new place with new people is very overwhelming. As many know, being a teenager is already difficult and trying to make friends in a new place is daunting. Students will become isolated and struggle socially until they can find a place where they feel they fit in, another difficult task.

Physically, high school students, especially, are already getting up early to get to school by the 7:45 bell. If those students now had to get up 30 minutes earlier, possibly 5:45 AM, 6:00 AM, the students are going to be exhausted throughout the day and struggle to focus and stay awake during class. They will then have to come home on another long bus ride, possibly even sitting through traffic to get home to their extracurriculars and homework, staying up late to finish everything to prepare for school the next day, just to wake up insanely early once again to repeat the process.

Some students who cannot take buses due to health issues will have difficulty getting to school in the mornings. Parents who work will not be able to provide their child a ride due to the distance, which may result in the need to take medication before getting on the bus, forcing the student to be groggy for the rest of the day.

Lastly, the mental effects on the students will be detrimental. Many students participate in sports and other after-school activities that will require them to stay after school for hours at a time. If students are leaving school even as early as 5:00PM, they will have to find their own transportation and will most likely not get home until a minimum of an hour later.

This delay in getting home will mean most students will be starting all of their homework later, causing them to stay up even later than they already are. Students will be extremely stressed about finishing all their homework on time, studying, eating dinner and having a social life all in one day.

According to a Better Health Channel article, “chronic sleep deprivation can have dramatic effects on a teenager’s life, including affecting their mental wellbeing and reducing their academic performance at school.”

Lastly, there is a large concern with the cost of bussing since many people believe that the money that would be used for bussing could be better spent by providing schools with high amounts of FARMs (students receiving free and reduced-price meals) students the materials they need for success. The money spent on bussing could instead go towards making sure that each classroom in the high FARMs schools has a chromebook for every student, calculators provided to every student or new textbooks for the classes.

The automatic turn to bussing students to other schools instead of exploring other alternatives to accomplish equality in education feels very desperate and not well thought out when these other options seem more sensible and will still allow students to stay in the comfort of their own neighborhoods and schools they have grown up with and know well. They will not have to be ripped out of their friend groups or forced to wake up at exhausting times but will still be able to say they are getting the same education compared to anyone else in the county. Overall, it feels like students are being neglected on a decision that is going to impact them the most. How the students are going to be directly impacted should be the first thought when MCPS is making decisions regarding redistricting and bussing, which feels like it was not considered in this plan.