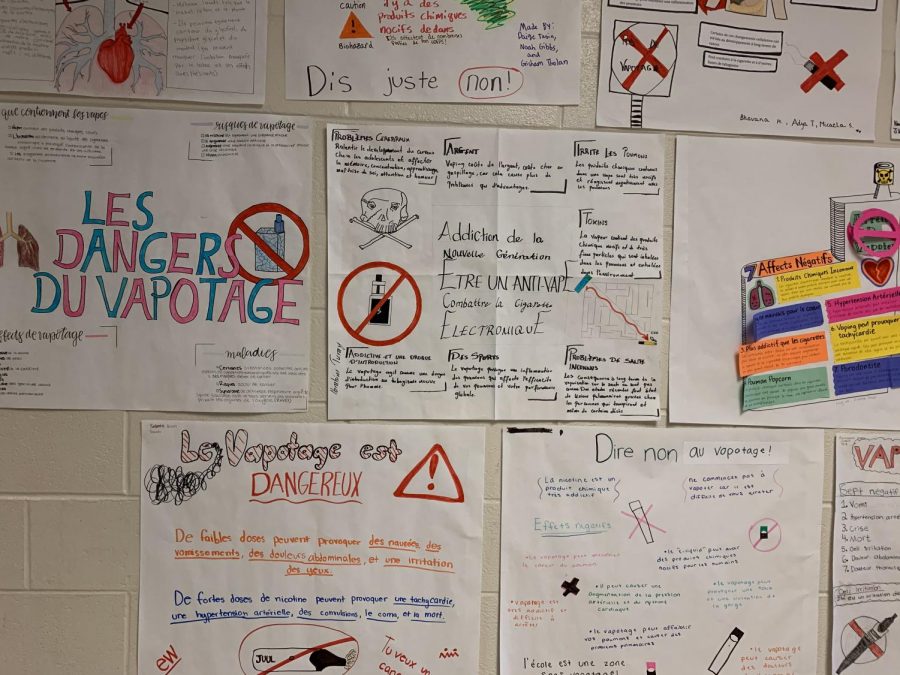 French students were assigned a project to demonstrate the dangers of vaping and to bring attention to the addictive tendencies it can cause.

The Substance Use Committee at WCHS is comprised of parents and students worried about the dangers of vaping, and hoping to make some changes around the school. They have hosted two forums, one in Nov. and one in Dec., that showcased important data and touching stories.

“The forum was powerful, gut wrenching, and full of important data and also some incredibly sad personal testimonials,” PTSA President Carla Morris said. “One huge take-away for me was never to think or say aloud: ‘Not my kid.’”

Eliminating vaping has become one of the top priorities for families at WCHS, due to the threat it poses to students’ health and the lack of research done on the new vape products.

“At our very first PTSA meeting this fall, we heard from so many parents whose students will not use WCHS bathrooms because of all the nasty chemicals in and even building service personnel, who have to wipe off desk surfaces filled with the stuff,” Morris said.

The committee was created this year in the wake of many new discoveries about vaping. More and more stories have been coming out from Montgomery County, Maryland, and the United States about people truly suffering from vaping. According to a Dec. 4 study by the Center for Disease Control, 48 deaths have been confirmed as being directly to vaping. Only recently has research started to be done about this threat.

“The committee’s purpose is, as you can imagine, designed to raise awareness and dispense critical up-to-date information on the dangers of using illegal and harmful substances that can literally kill,” Morris said. “Moving forward, we have a terrific, energized group of concerned and informed parents and students who have lots of ideas about ways to get students involved in building more understanding, and making healthy choices that don’t harm them.”

“I volunteered to chair this committee as I am a physician with expertise in addiction medicine,” Ahadpour said. “I am hoping that together we will implement initiatives that could end substance use at WCHS and serve as a model for schools across the nation.”

Students are getting heavily involved in this movement as well. The Students Against Destructive Decisions (SADD) club at WCHS is a student organization designed for the same purpose as the committee. WCHS senior, Louis Schreiber, started this movement four years ago, but has recently seen an uptake in interest from the community. He even contacted Congressional representatives to take action.

“My goals are that we educate the student body, parents and teachers on the real dangers of vaping and more importantly that the narrative be switched, the term vaping should no longer be used as kids often times equate it with water vapor, when in-fact it is far from that,” Schreiber said. “Ultimately, if we do those two things I hope that kids will recognize the dangers and quite not only for their sake but for everyone around them.”

The SADD club and the PTSA committee are working together on this, as the severity of this risk is incredibly high.

“Working with the PTSA thus far has been nothing less than amazing, everyone is incredibly supportive and truly wants to help our school become the best it can be and of-course one way of doing so is making it a safe , healthy place for all,” Schreiber said.